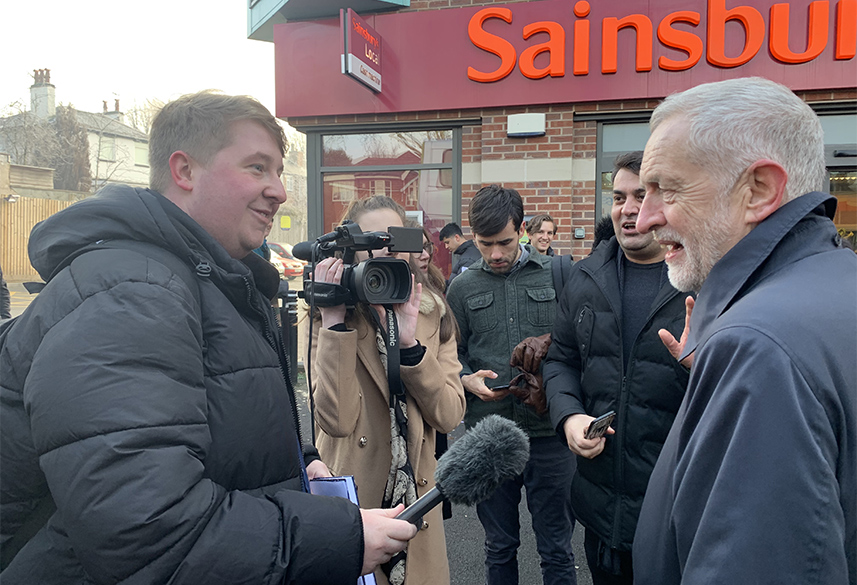 Two final year students studying BA (Hons) Broadcast Journalism had the opportunity to interview Labour leader Jeremy Corbyn when he visited the region in January to discuss cuts to public services, transport issues and to discover what affects the student population most. The students managed to secure an interview, allowing them to create a shortform video for social media and TV bulletins, which are produced during each news day.

Bradley and Hannah had to be persistent and enthusiastic to secure the interview, as Jeremy Corbyn had a busy schedule during his visit to Nottingham. Bradley told us: “It was surreal to be able to interview Jeremy Corbyn. It took a few days of work from emails and phone calls to the Labour press office but we finally got the opportunity to interview the Leader of the Opposition. It was an amazing experience, as I conducted the interview there was a huge crowd around me, which definitely added pressure to the situation. It was a brilliant interview and we were able to use it in our coursework.”

Interviewing and producing news content around such a high-profile individual was a great experience for the students, preparing them for industry. Bradley told us what he’d learned through the experience: “I've learned that persistence is key. Just keep trying, and making sure that people know you're available and open to information. Originally we got turned away from an event Jeremy was at in Nottingham, then got offered this other event where we ended up interviewing him.”

The fast-paced nature of news days and challenge to create professional content along deadlines help prepare students for broadcasting in industry. Bradley commented on the benefits of news days: “My favourite thing about news days would be everything. It genuinely sets you up for the real world of broadcasting so well. I've been on work experience at companies such as Channel 5 News and BBC Look North and doing news days has allowed me to thrive in these environments.”

He continued: “I like the thrill of being sent out to do something, cover a story, and interview someone of interest. Going out and then rushing back to get the footage edited and ready for air is great and when the footage does finally go on air it gives you an amazing feeling that it's your work on the TV or radio. News days have been my favourite part of the course so far.”