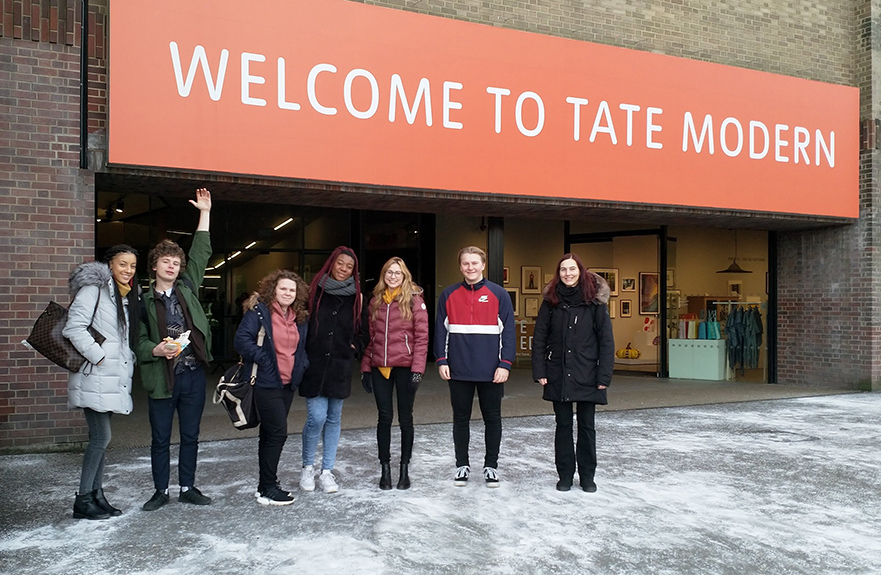 Students studying BA (Hons) German in the School of Arts and Humanities were given the opportunity to visit London’s Tate Modern gallery this month to enhance and contextualise their language studies. They visited the exhibition ‘Magical Realism. Art in Weimar Germany 1919-33’ which includes pieces from Tate’s collections as well as some from the George Economou collection.

The exhibition posed an opportunity for the students to see popular works that they may have already seen in context, as well as discover German artists who they have not been exposed to previously. The rare pieces presented in the exhibition are taken from artists such as Otto Dix, George Grosz, Albert Birkle and Jeanne Mammen.

The Weimar Republic – a democratic state founded after the end of World War I, was founded 100 years ago, and the exhibition poses an opportunity to review and commemorate this period of history. Students taking German have the opportunity to investigate Weimar Germany on all years of the course, and this also bears relevance to course discussion and analysis of Germany’s creative and cultural industries today. The period of history was in some ways a progressive democracy with a flourishing artistic and cultural scene, but also invoked extreme nationalism, social uncertainty and racism, which eventually fuelled the rise of National Socialism. Understanding this period is fundamental for students to understand developments in contemporary Germany and German society as a whole.

Shani-Leigh Robson, BA (Hons) German and Philosophy student, told us: “I’ve really enjoyed the trip to London. It was nice to have a break from all the current stress of exams! I also think it was amazing how everything was funded, as I wouldn’t have been able to afford to go without that help. The trip was a good way to come together as a class and included German culture!”

BA (Hons) French and German student Jonny Parker commented: “The best part about the trip for me was the fact that we got to see some German art in person rather than on the internet. Art is not usually something I enjoy but I found it to be really interesting and it gave me a good representation of what life was like in the inter-war years in Germany from a different perspective than we are used to.”