NTU won gold in Hockey and Football and took silver in table tennis and Lacrosse on a fantastic day of achievement for NTU Sport at BUCS Big Wednesday 2019. 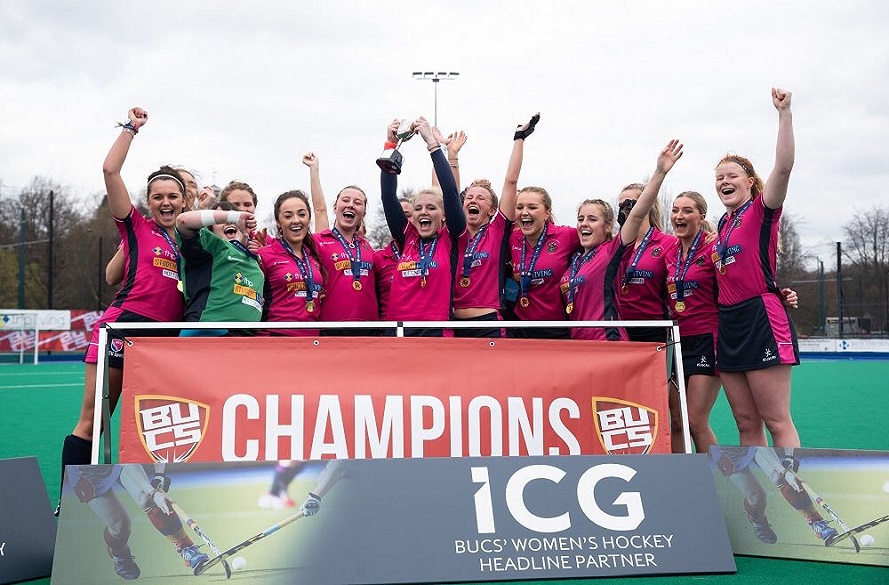 It was a day of great success for NTU with both our Women’s Hockey and Football teams battling to superb victories. Men’s Lacrosse and Women’s Table Tennis both fought hard and represented NTU proudly, but just fell short of gold.

Below we round up how all four of our teams got on at BUCS Big Wednesday. Women's Football have now won both the league and trophy this season.

It was a superb performance from NTU in their first ever BUCS Trophy final as they stormed to a 4-1 victory over the University of Bristol. Goals from Charlotte Broad, Elizabeth Cruz, Amy Sims, and Monique Watsonhe helped the pinks to victory.

The game started with Bristol just edging the match, a threatening ball across the face of the NTU goal being the main chance of note. However, once NTU settled in to the game they showed their dominance as a team. After several outstanding saves from Bristol’s goalkeeper kept the score at 0-0, the pinks finally broke the deadlock. A great through-ball allowed Charlotte Broad to burst through the middle of the pitch and slot home to take the lead.

With one goal on the board, NTU continued to grow in confidence and it showed, more good work from the pinks saw them add a second goal before the half time whistle. The sides went in at the interval with the scores at: NTU 2-0 University of Bristol.

The second half started the same way that the first half ended, with NTU dominating. Player of the match Monique Watson scored another goal to make it 3-0. With the women in pink looking comfortable they had a slight scare with around ten minutes remaining, Bristol scored from the penalty spot. They slotted it away to give themselves some hope with the game entering its final minutes.

NTU didn’t waiver and continued to attack as the clock ticked down. The outcome of the game was clear as the pinks scored a fourth goal with only minutes remaining. As the final whistle blew, it was pink cheers as NTU won the BUCS Trophy for the first time ever. The win continues the teams unbeaten record that includes both league and cup matches.

With league and trophy success now secured NTU go in to their final battle, the league playoff next week with fantastic momentum as they look to secure promotion. They will also take great confidence knowing that NTU have now defeated the league champions of 3 of the 4 other conferences (having not played Brunel). 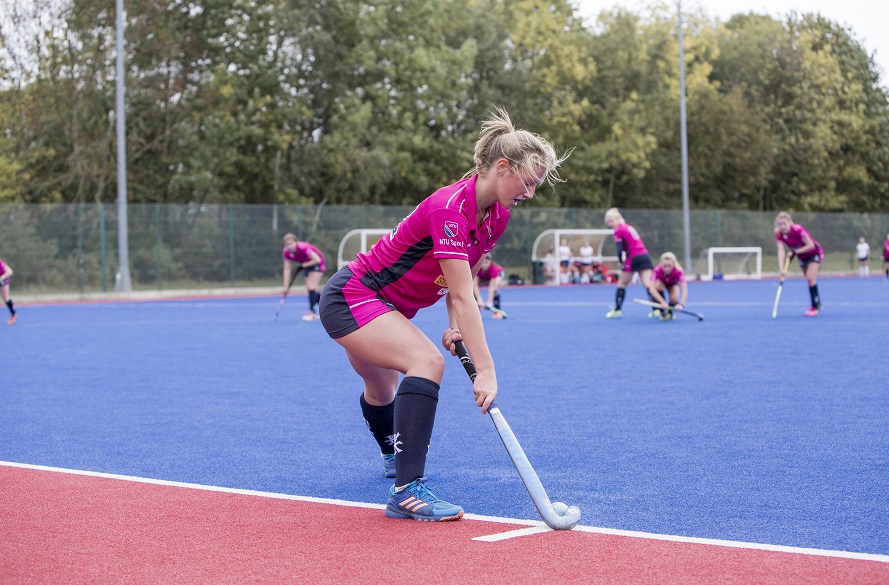 Women's Hockey have completed the league and trophy double after Wednesday's win.

NTU Women’s Hockey have had a brilliant season, but the team went into the BUCS Big Wednesday Trophy final knowing they’d have to play a tenacious game to get the win.

It would be foolish to underestimate a very strong Loughborough 2 team, who arrived at Highfields Hockey Centre with the championship title set fixedly in sight.

The game opened at 10am with both sides making efforts to get out of the gate in good form. Loughborough had the edge when it came to ball possession and didn’t make it easy for NTU to create chances.

However, it was NTU to put the first score on the board after Captain Bella Fiskin made a sterling goal having grappled through a tight defense, NTU 1 – LOU 0.

With ten minutes remaining in the first half, Loughborough answered with their own to equalize scored by half time NTU 1 – LOU 1.

Both sides upped the intensity of their play in the second half; with neither able to break ahead initially. NTU were certainly building up the play and proactive work from the pinks saw a goal made but then disallowed, NTU 1- LOU 1.

With the clock nearing fulltime, fantastic teamwork set player Tara Atchinson up for a great chance to break ahead. She took it, hitting the ball into the corner before the keeper could react. The final whistle blew with scores standing at NTU 2- LOU 1.

Captain Bella Fiskin said: “Obviously, adrenalin was really high for both teams. Loughborough certainly brought their A-game and made it a really hard win. This is my last year and it’s a great way to end my time here, getting the Trophy.” 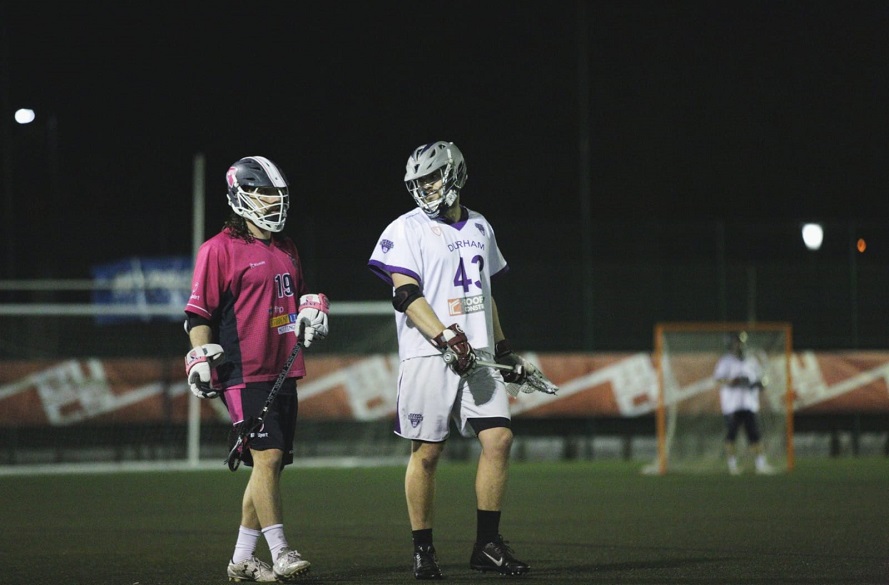 The last final of the day for NTU was the Men’s Lacrosse Championship. NTU faced lacrosse-giants Durham university, and this year the opposition were ready to go all out for the win.

Last year NTU ended Durham’s ten-year reign as BUCS National Champions, and payback was on the mind as the opposition looked to snatch back the crown.

Durham set the pace with dominant play which put them on the board first with a one-goal lead early on: NTU 0 – DUR 1.

Determined, NTU responded with two goals of their own in quick succession. Great teamwork seeing the pinks to an early lead: NTU 2 – DUR 1.

Both sides grappled to create chances, with NTU showing fantastic defensive performances. But it was Durham to equalize the score just minutes before the first quarter drew to a close: NTU 2 – DUR 2.

The second quarter saw a similar struggle, as NTU battled hard to get another goal and conceded, but Durham answered with another equalizer: NTU 3 – DUR 3.

Neither side seemed able to stay ahead for long, but Durham found a rhythm as the second half closed to get two more goals before the third quarter: NTU 3 – DUR 5.

The third saw things get really tough for the pinks, who fought hard but came up short against an unrelenting Durham. The opposition had found a momentum which tore through NTU defense to enter the final quarter with a comfortable five-goal lead: NTU 3 – DUR 8.

Durham continued to dominate the game in the final quarter and the gap began to look too much to close, as Durham hit double figures and NTU called a timeout: NTU 3 – DUR 13.

Becoming fatigued and fraught, the pinks didn’t give up once and continued to battle to the bitter end. With just minutes to go they managed to break the drought and make two goals in quick succession: NTU 5 – DUR 13.

It wasn’t enough to catch Durham, who had stormed too far ahead. The game ended with final scores at NTU 5 – DUR 13. 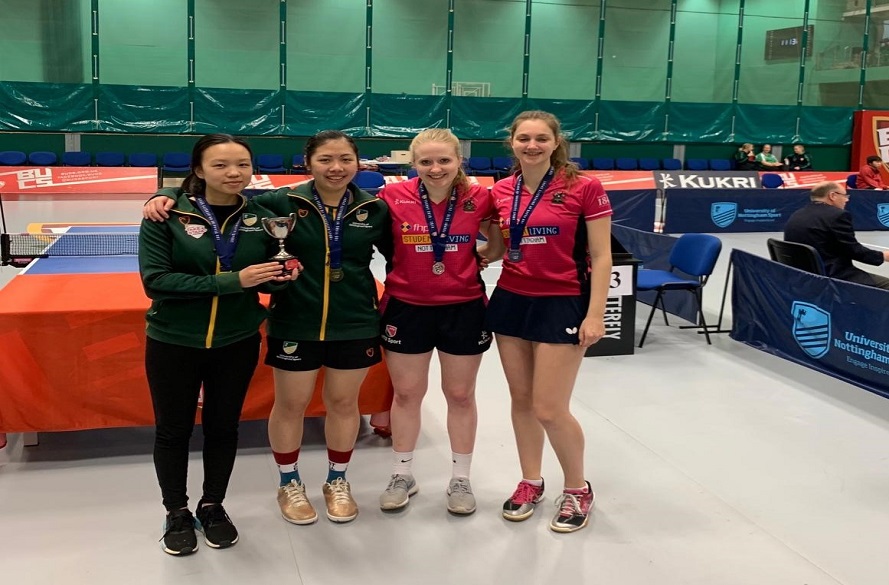 Despite a strong performance it wasn't to be for NTU Women's Table Tennis.

NTU battled bravely against a very strong UON side but it wasn’t to be. The green and gold of UON claimed gold as they win all three sets to take a 3-0 victory.

Both NTU players Lauren Evans and Gina Rieck fought hard throughout the game to try and get something out of the match. The pinks just couldn’t get past a talented UON team that have invested heavily.

It was a performance to be proud of by NTU and to reach the trophy final was a huge achievement in itself.