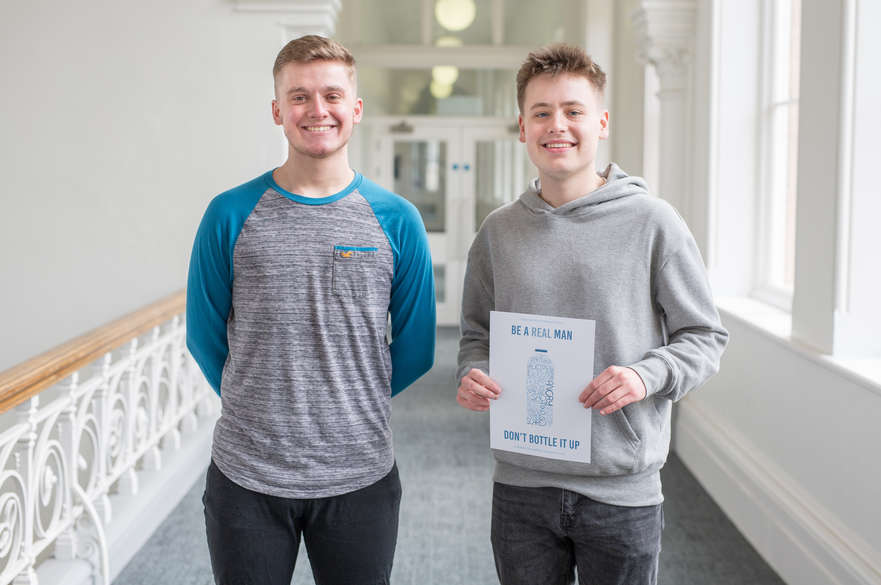 Matthew Skilton and Jacob Barker with their campaign poster

Second year BA (Hons) History and International Relations students Matthew Skilton and Jacob Barker have created a campaign to normalise conversations about mental health with their male peers. The project began as part of the module Humanities at Work, where students had the opportunity to create a project around ‘cultural myths’ and present it to staff, students and alumni.

The students created the campaign ‘Lift the Lid’, which aims to aid people in taking the first steps towards better mental health by giving them the confidence to speak up about anything that’s troubling them. The group plan to signpost to relevant mental health support and normalise conversations around mental health, particularly for male students. Matthew and Jacob felt that phrases such as ‘Man Up’ had in the past made themselves, and their friends, feel unable to reach out when struggling with their mental health.

Matthew told us: “Having both struggled with mental health, more openly in the last few months, we both understand the importance of taking those first challenging steps towards getting the help you need. These first steps are usually opening up and just talking about how you feel and what’s on your mind. We both agreed that it is easy to get overwhelmed with the university experience, especially in first year when numerous challenges and experiences occur within a short time period.”

The students have created a Twitter account and a YouTube channel where they plan to release videos around the topic of mental health. They have created a poster, which will be distributed around NTU campuses, with the purpose of allowing people to stop and think about how they are really feeling. Matthew described the impact he hopes the campaign will have: “The aim is simple. If we can help just one person speak up and seek the help they need then we have already achieved our goal. We want to reassure people that their feelings matter, and that it is okay to not be okay.”

In preparation for the campaign, the group carried out research into mental health in the university by carrying out a survey with other students, both from Nottingham Trent University and other universities. They asked participants if they found mental health support accessible, if they would like to hear the thoughts of other students and collected their opinions about stigmas when it comes to mental health. This helped to inform the campaign they’ve created, and their message around breaking down stigmas such as the phrase ‘Man up’.

Matthew added: “People’s responses were very varying and intriguing giving us an insight into how other university students, in a range of different universities, felt about the subject. Furthermore, it also opened our eyes to the sheer scope of issues people face whilst at university.

“We hope that our openness with our feelings throughout this campaign may inspire others to be open about how they feel.”