Annelise Edwards took a placement of ten weeks at the historic library, culminating in a talk to present her findings. Annelise Edwards, MRes English Literary Research student, has completed a placement at the historic Bromley House Library, researching their women’s writing holdings and contributing to research on feminist literature. The library, founded in 1816, is one of the only remaining subscription libraries in the country.

The placement comes as part of the Symposia module on the course and was organised by the English Literary Research team. Annelise researched Bromley House’s women’s writing, developing her interests within feminism and building archival research experience. She was also able to develop her online writing style by contributing blogs to the Bromley House website, and present her findings at a talk led by course leader Dr Catherine Clay. This provided her with great public speaking experience, preparing her for her desired career in academia.

Annelise reflected on her experience. She told us: “I was able to really appreciate the history of the library and gain knowledge of Nottingham’s literary culture over the past 200 years, which was fascinating. I gained fantastic communication skills by liaising with all staff members at the library and networking with different people at the talk at the end of my placement. I improved my research and analytical skills through sifting through the books and collecting statistical data, as well as looking through the library’s archives.”

Dr Catherine Clay and Annelise delivered a talk at Bromley House Library titled ‘Women’s Writing after Suffrage’, which marked the end of Annelise’s placement. The event focused on women writer’s role in the campaign for women’s suffrage, and their priorities in the years leading up to their eventual winning of the vote on the same terms of men in 1928. It particularly identified the magazine Time and Tide as a significant development for women’s writing and feminism during these years. 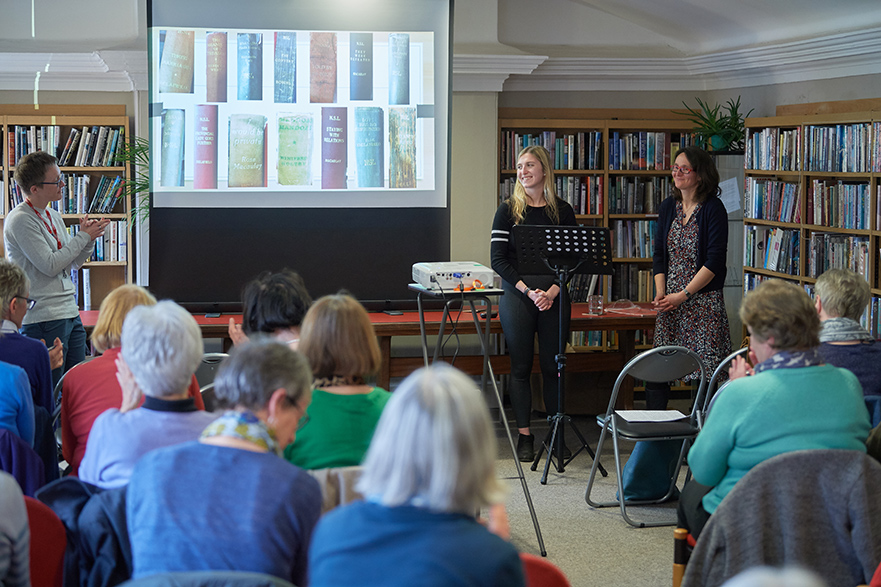 Annelise’s research focuses on the representation of adolescence in gothic texts by Stephen King and Angela Carter between 1965 and 1985, as a time of anxiety and revolution. She is particularly interested in the way King and Carter use gothic tropes to present developmental symptoms and rites of passage as horrific, whilst bringing to focus the anxieties surrounding the 1960s counter-culture, child abduction and murder, and the more liberal attitudes towards sexuality that emerged during the late twentieth century.

We asked Annelise what the favourite part of her placement was. She commented: “I enjoyed the independent research side of the placement, and I loved the fact that I had the ability to contribute to the research and knowledge of women at Bromley House through my findings.”

Dr Catherine Clay added: "This year is the first year we have offered placement opportunities on the MRes in English Literary Research. This placement at Bromley House presented a fantastic opportunity for one of our students to apply their advanced research skills in a professional environment, and to present their findings alongside a research talk at the library by an academic."

"Annelise’s research on ‘first-wave’ feminist and women’s writing holdings of Nottingham’s Bromley House Library dovetailed beautifully with my research talk on the interwar feminist magazine Time and Tide, contributors to which are well represented on the library shelves at Bromley House. Several audience comments collected in feedback after the event indicate that the talks opened up these neglected women writers and texts to new readers who we hope will now borrow and read these books from this fantastic collection at Bromley House."