The twenty-two week project was completed earlier this year on the roof of Victoria Centre. It was commissioned by Nottingham City Homes (NCH) as part of its Decent Neighbourhoods scheme which aims to improve the lives of residents by developing green-spaces with a community focus.

Helen started Hosta Consulting in 2012 with the help of The Hive after graduating from the BSc (Hons) Environmental Design and Management at NTU. She also studied FdSc Horticulture and a Masters in Business Administration from NTU.

Two current NTU FdSc Horticulture students, Barbara Cook and Hafsah Hafeji, also assisted with the planting on the roof for one morning to gain experience.

The project creates Nottingham’s largest intensive green roof- a 316 square metre community garden. It is designed to provide a healthy, sociable environment for 400 residents of the Victoria Centre Flats, a high rise apartment block in the centre of the city. None of the residents previously had access to any green space. 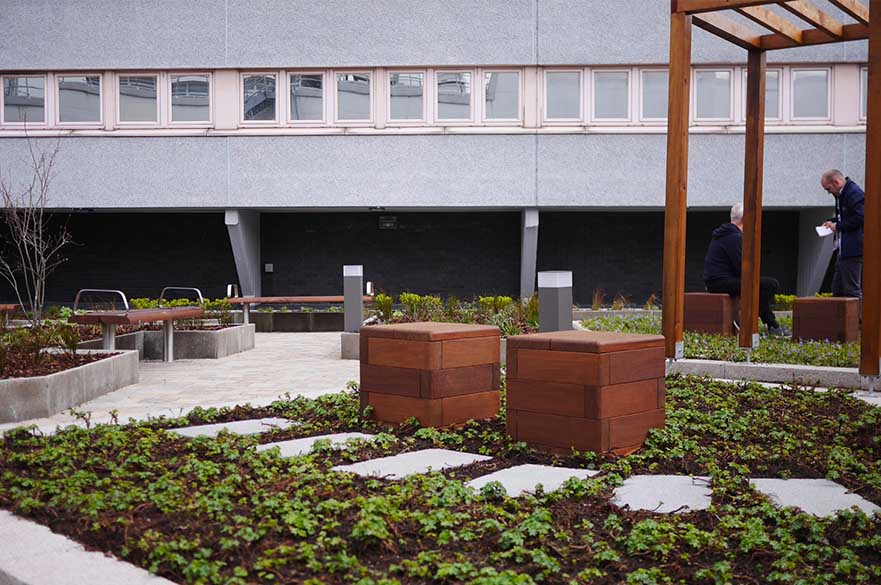 Helen said: “The residents at Victoria Centre Flats live in a high rise building in a busy city centre location. It was important to create a beautiful garden, which would need minimal upkeep.

“It was also vital to gain residents’ input into the design to ensure that we were creating something they really wanted.”

The garden provides a striking green space, which creates interest throughout the year with informal sunny and shady borders.

The community garden is enhanced by 12 benches, providing plenty of opportunity for residents to enjoy the space from every aspect. There are stepping stones between the planting, and cube seats within the middle of the borders, allowing visitors to really immerse themselves.