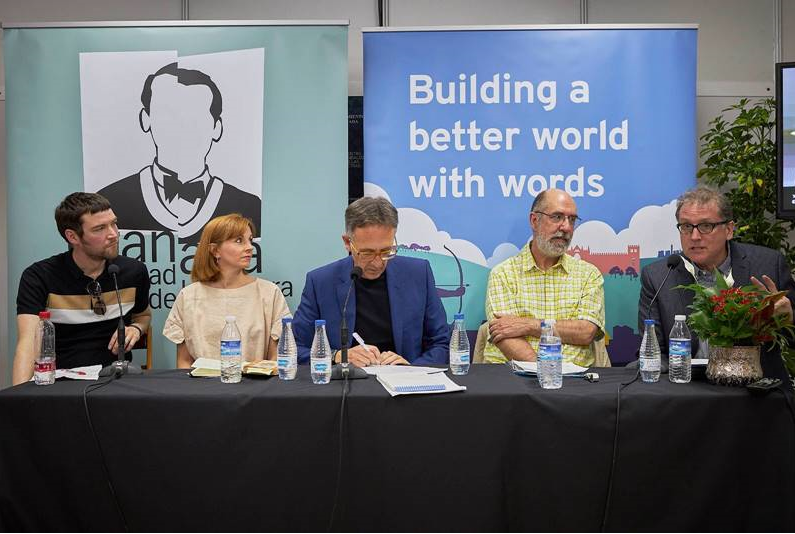 Nottingham UNESCO City of Literature (NUCol) has been a strategic partner of Nottingham Trent University (NTU) since 2017.  The partnership allows for collaborative research, enriched course content and for students to gain industry experience.

The Granada Book Fair included 3 days of events organised by NUCol.  NTU’s Becky Cullen (poet and researcher), Professor Gregory Woods (Emeritus Professor) and Rory Waterman (poet and Senior Lecturer in English and Creative Writing) joined a selection of  literature experts in celebrating authors and poets, including Byron and DH Lawrence, in order to enable and enhance cultural exchange opportunities between Granada and Nottingham.

Holli’s Media & Events role focused on documenting this activity at the Book Fair.  This gave her the opportunity to attend events, as well as to interview key speakers to produce a vlog and blog.  This work has continued after her return to the UK, with Holli producing a blog detailing the opening ceremony of the Book Fair.  Several other blogs regarding the Book Fair will follow over the next month.

Holli explained, “Although I have an avid interest in literature, it is not something I am able to explore often, and the book fair allowed me to ignite my passion for literature once more. I had never before experienced a writing workshop or a poetry evening, and I can definitely say that they are both events I would like to attend again as I thoroughly enjoyed them.

“I was able to use Spanish language skills in a professional setting, whereas before I had only used them with my peers. My confidence grew massively over such a short space of time… Overall, my experience as an intern was excellent and the skills gained invaluable.”

Jim Hall, Nottingham UNESCO City of Literature Programme Manager, added, “Holli became an integral member of our delegation during the Granada Book Fair. She expertly captured the events, workshops and dialogue that took place during a week of international collaboration, interviewing a wide range of poets, educators, booksellers and event organisers with skill and genuine interest in their practice. We are extremely grateful for her work.”

The UNESCO Cities of Literature are a global network of cities which specialise in literature. The UNESCO designation recognises excellence and places an obligation on cities to nurture and support culture & creativity and to collaborate internationally through projects which ensure literature reaches as wide and diverse an audience as possible, locally and internationally.

Find out more about our sectors and partnerships on our Business and Employers website.