Chinese student Feixue Huangdu has attracted over one million Chinese viewers and garnered attention from the likes of the BBC, Country Life and The Independent for her popular live streaming. 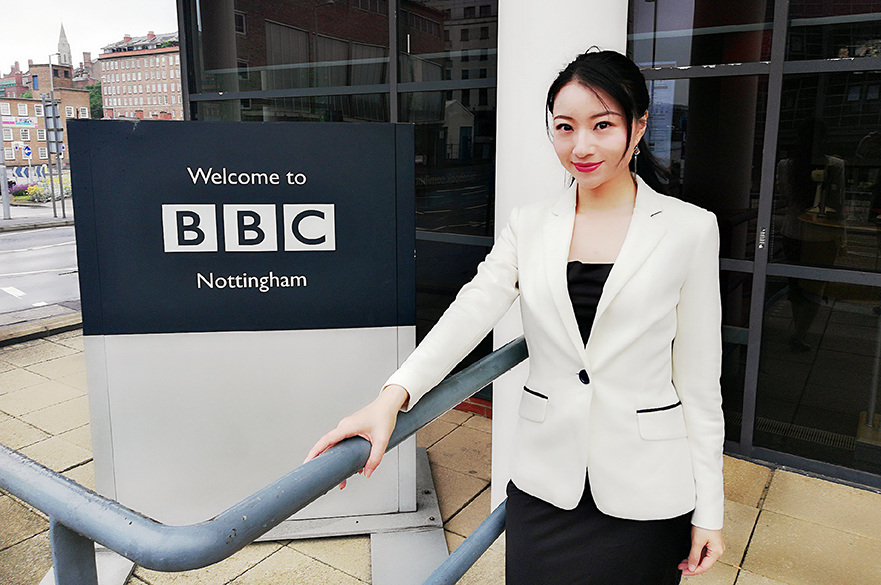 Feixue’s tour of Ruddington Village Museum in Nottinghamshire attracted 434,000 viewers from China, opening the heritage site up to more visitors than it has seen in its lifetime. Since its opening in 1968, Ruddington Village Museum has received a total of 75,000 visitors from the UK and has thrived from this opportunity to connect with an international audience. Tour guides from the museum accompanied Feixue and explained more about the various British objects on display, receiving an enthusiastic response from the Chinese audience.

The live-streams have been a feature of Feixue’s Masters degree research, which looks at introducing Chinese audiences to British cultural heritage in a way that suits them. They also encourage small British museums to think about how they communicate to international audiences. Over the last two years, Feixue has carried out similar broadcasts at Trent Bridge Cricket Ground, Canalside Heritage Museum and Belton House in Lincolnshire, gaining popularity with Chinese audiences. She mentioned: “When I realised the size of the audience figures, I felt very excited and took it as proof that what I am doing is valuable,” she told the BBC. “It also showed the great charm of British heritage to Chinese audiences.”

Since 2016, NTU has continued to develop their relationship with the CUC by delivering postgraduate courses in Beijing. Formerly known as Beijing Broadcasting Institute (BBI), CUC is ranked as the Number One University in China for journalism (2018 CUCAS China University Ranking). It is highly respected, particularly for its work in media.

We asked Feixue why she decided to start live streaming heritage tours to China and she told us: “Many people living in China will never be able to visit the UK and even if they did, they would be unlikely to know about these small museums, let alone visit them. I hope that my research on new media will be useful to British museums. I have been very surprised at the interest from everyone and the generous support of NTU staff and the museums to make it happen. To date, I have had over 1 million Chinese people view my live streams and I am now trying to improve the quality of the programmes and develop an evaluative approach to assess the impact on museum staff and volunteers.”

These webcasts have offered NTU more ways to connect and collaborate with CUC thanks to Feixue. She added: “The students back in CUC tuned into my last live stream about our exhibition at the Canalside Heritage Centre in Beeston. Because I received the cooperation of staff and volunteers, I was able to provide them with deeper insights into the collections and exhibitions. I think it will help their studies and understanding of British approaches to exhibitions before they come to the UK.”

The enthusiastic support from the press including BBC Radio Nottingham, Country Life, The Independent and BBC News has allowed Feixue to network with museums and heritage sites across the UK, who are also interested in having their work shared with an international audience. Feixue told us: “The BBC has transmitted my project around the world, generating interest from many UK museums, museum conferences and world media outlets. Without the opportunity to come to the UK and study this course at NTU, none of this would have happened. I am deeply grateful. I am very lucky to be of interest to the wider world, but also to have had the support of my research supervisor and staff at NTU.”