A cyclist who lost the movement of his arm after being in a head-on collision with a car has been helped to ride again thanks to his former university.

Richard Kershaw, 42, has been given a bespoke cycling brace which lets him hold the handlebars and adjust his arm position while riding after working with Nottingham Trent University student Olivia Killeya.

Previous braces had only allowed Richard to adjust his position when static on his bike, meaning he had to stop in order to change arm position.

But the new design - named the Ø-Brace after Richard’s cycling club, ØVB, in West Bridgford, Notts - can be adjusted in increments while Richard cycles along. 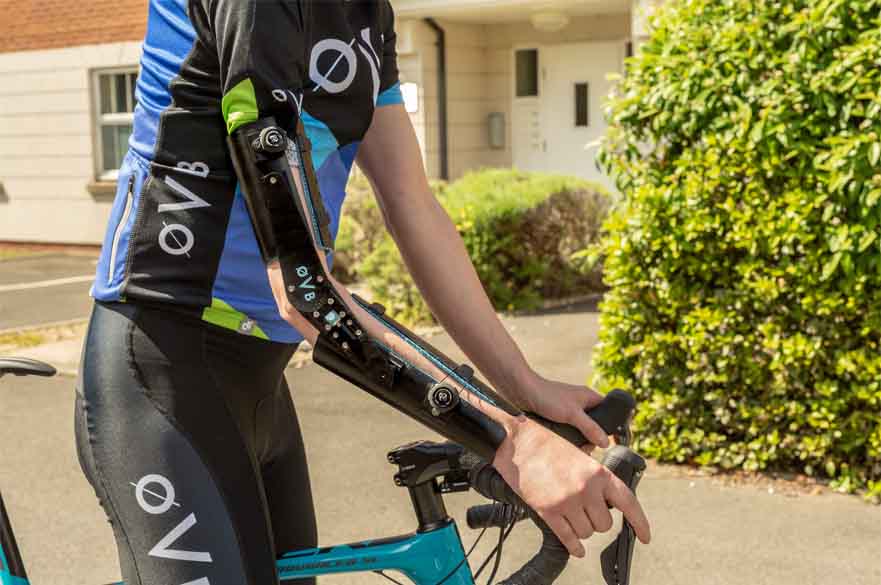 The brace allows Richard to hold the handle bars steady with his injured arm and adjust it with his other hand, allowing him to change body position so he can become more aerodynamic when required.

A spring slider gear mechanism allows the brace to be adjusted by 10 degrees at a time. Made from acrylonitrile butadiene styrene, a lightweight and tough plastic, the brace is also lined with neoprene foam for comfortable padding and grip.

Richard, of Wenlock Drive in West Bridgford, who graduated from NTU with an MSc in Geotechnical Engineering in 2007, said: “The new brace is great. From the first moment I tried it on, it was really comfortable to wear which is a big improvement."

“Having something made specifically for me makes a big difference, great to work with NTU again too. I can’t wait to use it out on the road.”

Richard lost the movement of his right arm when nerves were disconnected from his spine in the collision. To regain some of that movement, surgeons performed a pioneering operation to rewire nerves from the intercostal muscles to his bicep.

When Richard breathes in, he can make his bicep contract. Over time and through physiotherapy, his brain will learn that the relocated nerve now controls the bicep and will be able to move it independently, without the need to breathe at the same time.

The collision happened in 2017 in the Vale of Belvoir when Richard was riding in a group. Three of his friends were injured, though Richard suffered the most injuries, comprising of multiple broken vertebrae, a teared liver, a head injury and more.

Richard was taken to hospital by air ambulance and spent seven weeks there – two of which were in an induced coma - and has undergone ten operations. He also spent three days on a ventilator after developing pneumonia.

Two weeks after coming out of hospital Richard rode a Wattbike in his friend’s garage and nine months later rode at the velodrome in Derby on a normal road bike.

“The hospital staff have been amazing. I owe my life to the air ambulance. I want to do a charity ride for them,” says Richard.

“I owe my life to Sally and John, who are both medically trained and saved me by the side of the road before the air ambulance arrived. They’re both now my friends.

“My arm will never be the same, but if I get some movement again, it would be nice to shake hands using my right rather than my left.” 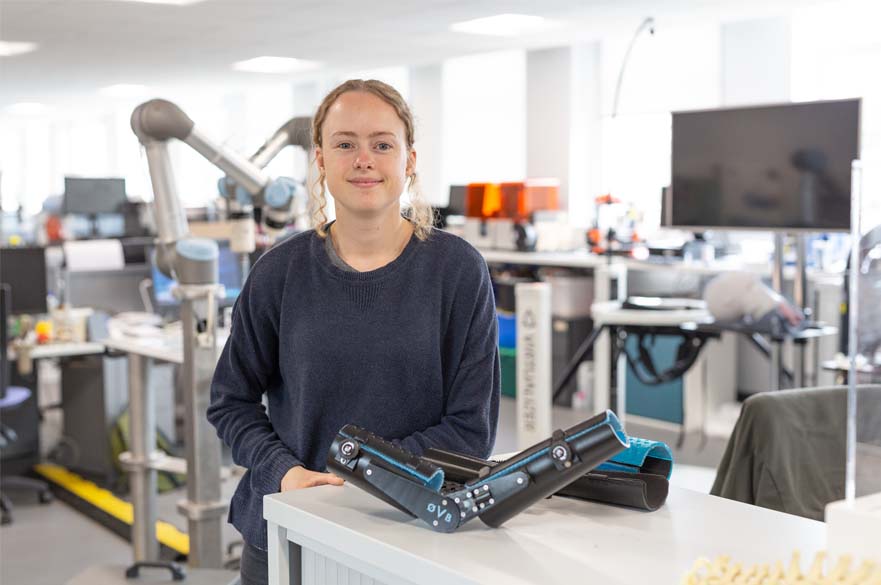 The Ø-Brace will go on public display at New Designers in London from 2 to 6 July.

BSc Product Design student Olivia, 22, from Surrey, said: “What Richard has been through amazes me. His recovery is inspiring. I’ve loved working on this project.

“The key thing was to design something which Richard can adjust while cycling. There’s not a lot of products available for people with upper body injuries.

“User-centred design is an area I’ve always wanted to get into. I am proud to have helped.”