A wrist strap which cools a person’s blood flow has been developed by a Nottingham Trent University student to sooth people during heatwaves. 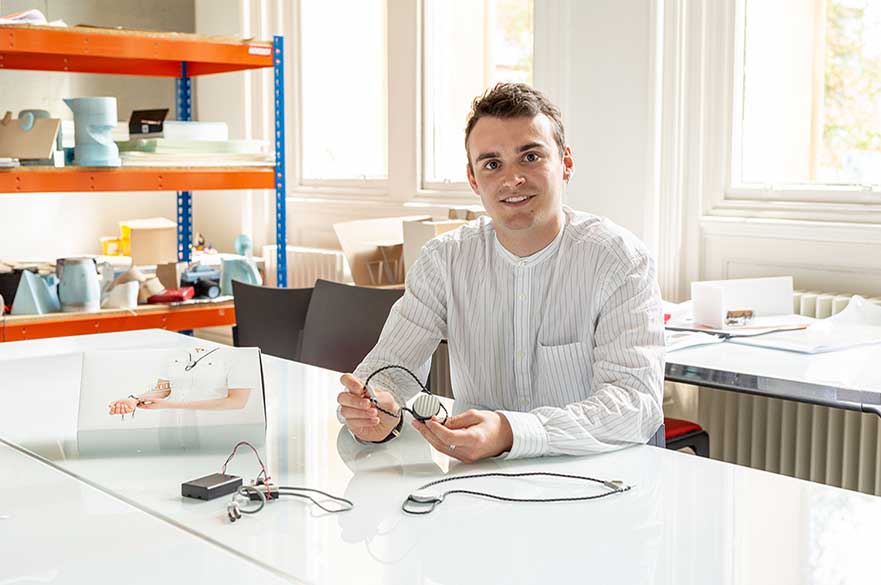 A wrist strap which cools a person’s blood flow has been developed by a Nottingham Trent University student to sooth people during heatwaves.

William Walter, 22, says his prototype - the Climati - could help athletes in difficult conditions and support older people in rising temperatures.

The technology centres on the use of a Peltier device and heat sink – which are usually found in computers – to target pulse points in a person’s wrist and apply a cooling sensation.

The aim is to make a person feel more relaxed psychologically, rather than reduce their body temperature which is regulated naturally by homeostasis.

“Many people can panic in the heat and feel overwhelmed on hot days,” said William, a BA Product Design student from Studley near Birmingham.

“But by providing an on-going cooling sensation, this stress can be alleviated to help people feel better.

“The sensation makes people feel cooler, rather than it actually reducing body temperature.

“With the surge of wearable technology today, this is an effective and real way of supporting people who may already be wearing things like smart watches.”

The technology can be transferred from a wrist strap and applied to other pulse points on the body, such as at the back of the neck.

The Peltier device also has potential to be used to charge the battery inside the device by converting heat flux from the body into usable energy. This could make the wearable fully self-sufficient piece of technology.

Unlike other methods to cool down, like a cold flannel or icepack, the Climati would stay at a constant set temperature and never warm to room temperature.

The device can cool down by as much as 10 degrees Celsius in a matter of seconds, but even a 2 degree fall in temperature can provide cooling sensations and comfort.

A vibration chip is included which can be toggled on or off to provide a further calming sensation to the wearer.

James Dale, Head of Product Design at Nottingham Trent University, said: “Will has considered the needs of people in the future following predictions of rising global temperatures.

“He has designed something unique which could help people cope better in the heat that can be easily integrated into existing technologies.

“His working prototype has proved the concept and he has enjoyed encouraging feedback from people who believe this technology could help them.”