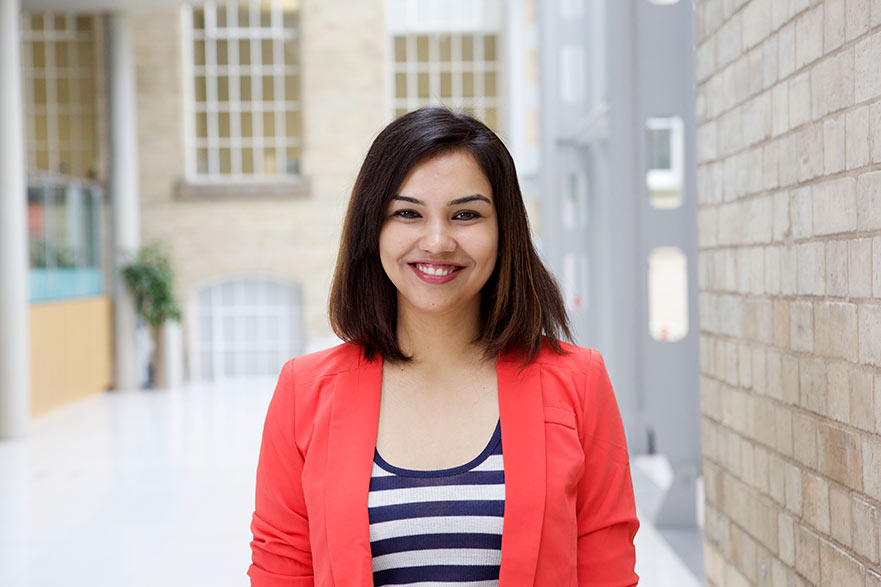 A PhD student at NTU has reached the national finals of 3-Minute Thesis, a prestigious academic competition, hosted by Vitae, which challenges doctoral candidates to present an engaging and succinct three minute spoken presentation of their research topic.

Preethi Misha, a PhD student and lecturer in International Business at Nottingham Business School (NBS), was named winner of the NTU 3-Minute Thesis competition held as part of the Doctoral School Research Festival back in March this year. As a result she was entered into the national competition, where she was up against 70 semi-finalists. She was chosen as one of the final six participants to present her thesis to a large audience at the Vitae Conference in September.

3-Minute Thesis was originally developed by the University of Queensland in Australia, as an initiative to celebrate the diverse research being conducted by their PhD students, in addition to engaging non-academic audiences. It has been taken on by many UK universities as a means to help research students develop their confidence and communication skills, and participation is actively encouraged amongst NTU’s research community through the Researcher Development team.

Preethi joined NTU in 2015, as a PhD student studying unethical leadership. She had previously worked in the financial services industry, for firms including Goldman Sachs, Deutsche Bank and Swiss Re. While working at investment banks, she noticed they were frequently in the news for unethical behaviours. The fact that the firms continued business as usual, despite being involved in corporate scandals, motivated Preethi’s PhD, in which she explores how unethical leadership behaviours flow from the top to the lower levels of hierarchy.

Preethi told us: "Getting to the final six was an exciting experience which really pushed me out of my comfort zone. Communicating an 80,000 word thesis in three minutes to a diverse audience can be quite challenging, given that you are automatically disqualified if you exceed even a second more than three minutes. It has taught me how to deal with pressure, how to communicate with a large audience and has also reinforced the importance of investing time and practising with discipline."

She continued: "Even though this was an individual event, my colleagues across NTU and NBS were instrumental in my success. When I won the intra-university competition in March, the Deputy Vice Chancellor for Research, Professor Nigel Wright, was very appreciative of my performance. My friends recorded this on video and it helped me to keep going each time I doubted myself or felt nervous during preparation for the finals.  Two colleagues - Catherine Abe and Liz Killick - listened to my speech multiple times and provided feedback, for which I am very grateful. My supervisors - Professor Marius Van dijke and Dr. Nadia Kougiannou - cheered me on and supported me all the way, and I owe my success to them. Simone Apel and the Research team who were physically present at the conference also gave me advice on how I could control my nerves. As a PhD student, you often doubt yourself, and having this kindness and encouragement certainly helped me deliver my presentation well."