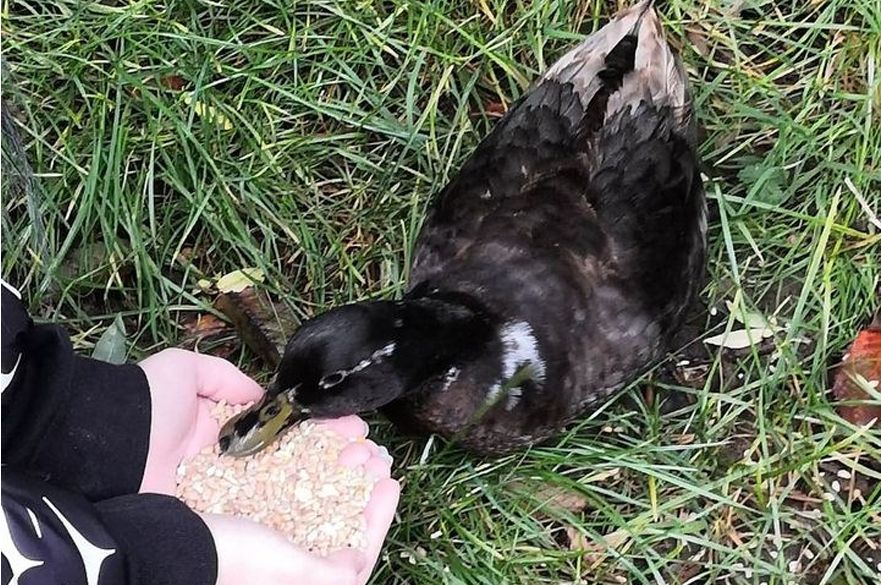 As part of the year 2 Level 3 Animal Management timetable, students are actively involved in doing campus walks in support of their estate skills module. Shortly after the team started back on-site this year, they noticed that there was a duck hanging-around sheep walk’s pond.

“On the surface this isn’t unusual – but every time students were taken to the area, this duck would be there, always on its own”, Jo Little told us.

“Myself and the other staff nicknamed him “ducky-no-mates” as even when there were other ducks in the area he was always separate from them”, she went on to say.

“What was strange is that the duck went out of its way to swim around the boardwalk, waddle up a steep bank, to come and stand in the middle of us all whilst I was teaching. He then went up to the students one by one; sitting on their feet and jumping up to peck their clothes!”

“The following week I took the same group to the same area. This time we took some food with us: the duck did the same thing as the week before; it came out of the water and onto the grass to greet us. The duck not only ate out of their hands but it was ravenous! It seemed like he had not been feeding himself.

“Not the behaviour of a wild duck, which got myself and the other staff thinking that he may be an escapee, or an abandonment. The fact that he didn’t look like a wild-type duck also backed up my thinking.” Jo went on to say.

“One day when I was working from home he popped into my head again: convinced that he was someone’s pet, I decided to put a simple search into Facebook: “lost duck Southwell”. And to my surprise a post appeared – of a missing duck called “Daffy” from the Southwell Road (Mansfield) area - with a picture that looked very similar to ducky-no-mates!

“I messaged the original poster and sent her some photos. She wasn’t 100% sure that it was her duck, but she felt that the pictures and behaviour were close enough that it could be a possibility.”

“Once I have been granted access for the potential owner, we walked up to the pond and ducky-no-mates was there waiting as per usual and it was a happy ending! Shortly after we arrived, the duck came to see us; his owner bent down and he let her pick him up with no resistance. He nuzzled into her neck, “groomed” her coat and did not struggle once on the walk back to the car. She felt confident that this was her missing Daffy, who was an affectionate animal and had a strong bond with her.”

“She took him home and reintroduced him to his old friend – another duck – who seemed to confirm this, as they ran up to one another straight away when they were reintroduced, quacking and seemingly happy to see one another.”