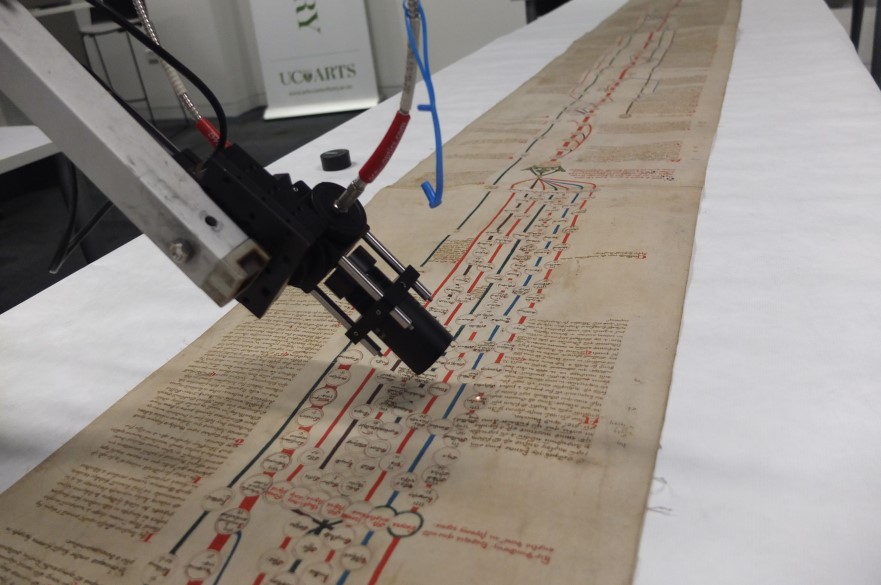 Centre for the Study of Religion and Conflict

The centre has been established at NTU in order to increase understanding of the origins, ideology, implementation, impact and historiography of religion and conflict from the medieval period into the early nineteenth century. Our understanding of "conflict" is interpreted very broadly to incorporate not just military but political, social, institutional, cultural, ethnic, racial and gendered themes, source material and debates. Tolerance, religious change and the role of religion in the resolution of conflict are also of central importance to the studies we engage in.

The expertise of the centre’s core members focus broadly on the Crusades, the Levant and the Military Orders; Reformations and Confessional societies; the Conquest of the New World and Mexican identity; Africa during the late medieval period; Britain from the Seventeenth to Nineteenth centuries; and the Transatlantic slave trade.  We have undertaken and supervised significant research relevant to racial inequalities (Lussana, Fuller, Simmons); poverty, welfare and social inequalities (King, McCallum); religious diversities (Morton, McCallum, Hodgson, Fuller, Gould); identity (Fuller, Hodgson); military histories (Morton, Bennett);  gender and emotions (Hodgson, Lussana, Powell). Our activities have brought together a wide network of scholars who investigate the relationship of different faiths, confessions and heterodoxies to conflict as they intersect with other societal and situational factors. Our networking has enabled comparisons and contrasts across a wide range of contexts and helped to develop new definitions and paradigms for understanding the roles played by belief in national, communal, and inter-personal conflict.

Details of our networking events and regular research activities are captured on our conference website and blog.

Image reproduced with kind permission of the University of Canterbury Christchurch: The Canterbury Roll, a fifteenth century ‘Noah’ genealogy of British kings.

Since 2017 the centre has held a biennial conference: usually a three-day programme which incorporates a public lecture and workshops across Nottingham. Previous keynotes have included Professor Elizabeth Tingle (DMU) and Dr. Katherine Lewis (Huddersfield), Dr. Matthew Gabriel (Virginia Tech), Professor Penny Roberts (Warwick) and Dr. Chris Jones (University of Canterbury, Christchurch, NZ). Delegates from across Europe, the US and Australasia regularly attend. Our first conference resulted in collection of 16 essays for the Routledge series Themes in Medieval and Early Modern History as Religion and Conflict in Medieval and Early Modern Worlds: Identities, Communities and Authorities published in 2020. A second volume from the 2019 conference Miracles, Political Authority and Violence in Medieval and Early Modern History is in production. The next CSRC conference is aimed for 2021, though the impact of Covid-19 restrictions are under consideration.

We regularly hold research seminars and bespoke events such as one-day workshops and public lectures. Previous workshops we have supported include The Thirty Years War – 400 years on (2018) co-funded by the British Council for Military History; Charity, Welfare and Emotions in Early Modern Britain and Ireland funded by the Royal Historical Society (2019); The 500th Anniversary of Moctezuma and Cortes’ first meeting (2019); The Crusades: Borders Margins and Interfaces (2020); and the annual NTU History postgraduate conference.

The research activities of centre members have been supported by external grants from the AHRC; ESRC; Wellcome Trust; Leverhulme Trust; Pasold Trust;

the Royal Historical Society; the Council for British Research in the Levant and the Society for the Study of the Crusades and the Latin East. Our students work on projects in collaboration with institutions such as the British Library, the National Archives, the Society of Antiquaries of London and Nottingham Castle Trust. We have also fostered relationships with a number of local institutions, schools and businesses for disseminating research such as Bromley House, the Old Rectory Museum, Loughborough, the National Civil War Centre, Newark and Warlord Games.

The individual impact activities of staff and postgraduate members from are regularly captured on the news and events section of the Centre’s conference website and blog.  Typical activities include public lectures; book festivals; schools outreach; and TV and radio interviews.

Our core members hold a number of significant editorial roles.  King edits Family and Community History, Bennett is editor of the Thoroton Society Journal, Hodgson is co-editor of Nottingham Medieval Studies and McCallum is General Editor and Publications Secretary for the Scottish History Society. Between us we edit four book series for Routledge: Advances in Crusades Research; Rulers of the Latin East; The Military Religious Orders: History, Sources, Memory and Themes in Medieval and Early Modern History.

To find out more about individual research projects members of the Centre are involved in, please click on the links below:

Below is a list of current or recently completed PhD students attached to the centre. Members of our team co-supervise a number of PhDs with other universities in the Midlands 4 Cities DTP. Our students regularly engage in our events programme of seminars, workshops and conferences. We also hold special postgraduate workshops aimed at MA Students and 3rd year undergraduates thinking about postgraduate study in Medieval and Early Modern topics. The Centre provides our PGRs with important opportunities to develop their research skills and to network both nationally and internationally.

Jack Beaman (co-supervised with University of Nottingham) - Noble and Non - noble warriors during the crusades.

Giampiero Bagni The Templars in Bologna.

Matthew Bayly A human ecology of the poor law in the Lincolnshire Wolds, 1800-1860.

Sara Bradley The nature and role of anti-Spanish sentiment in news and travel-related pamphlets produced in London in the 1580s.

Laura Charles Experiencing Love and Marriage in the East Midlands 1600-1700.

Helen Gair The impact of the Reformation on female piety in Early Modern Scotland.

Catherine Gower Nay, they will be kin to us, or they will fetch it from Japheth’: The production, dissemination and use of royal genealogical chronicles in the first reign of Henry VI (1422–61).

Bethany Marsh (University of Nottingham)– 'Protestant Martyrs or Irish Vagrants?' Responses and the organisation of relief to Irish refugees in England, 1641-1651.

Erin Newman Were Male and Female Criminals in Seventeenth Century Popular and Court Literature, represented as either Defying or Complying with Religious and Gender Ideals.

Mary Rudling The experiences of the poor under the Old and New poor laws in Sussex, 1800-1860.

Maxine Spry The use of angels and angelic motifs in martyrdom treatises during the English Reformation.

Caroline Walton An emotional history of the nineteenth-century workhouse.