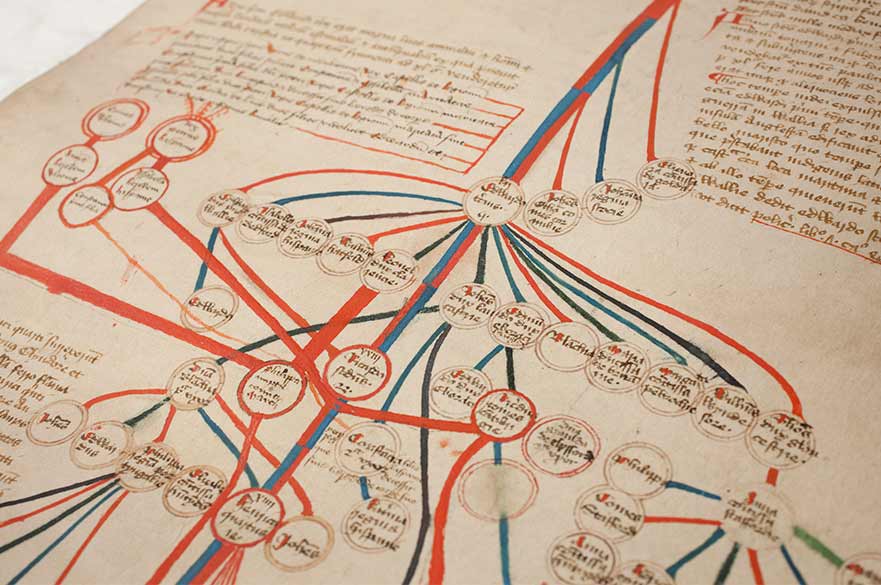 From Myth to Majesty: An Historical and Scientific Exploration of Fifteenth-Century British Royal Genealogies from the ‘Noah’ Tradition

The Canterbury Roll is a five metre long genealogical scroll of English kings, including mythical and Biblical ancestors, written in Latin in England during Henry VI’s reign. During the Wars of the Roses, a large number of such genealogies were produced, but this Roll is one of only 12 in which the royal line starts with Noah, (most start with Adam). Acquired by the University of Canterbury (NZ) in 1918, little is known about its provenance.

Using a combination of scientific and historical techniques, this project deepens our understanding of the relationship between genealogy, religion, history, heritage and society. It improves public accessibility to a medieval source of national and international significance by producing the first digital critical edition and translation of the Roll, freely available on a website funded and maintained by UC Digital Humanities.

This cross-disciplinary project also uses non-invasive scientific imaging and spectroscopic techniques offered by the NTU ISAAC Mobile Lab to reveal hidden/faded information and to characterise the material in order to inform the historical research, underpinning future investigations of other genealogical manuscripts. The research will be shared through academic peer reviewed journals and conference papers as well as through heritage exhibitions developed with partner institutions.

The initial phase of the research carried out by Dr. Chris Jones, the Digital Humanities Centre and University of Canterbury Christchurch student interns has seen the development of a website, digital edition and translation of the roll, available here.

In 2017 an NTU SPUR bursary for two undergraduate students under the direction of Hodgson helped to develop and populate a prosopographical database for the Roll which will allow us to incorporate innovative display of the genealogical links highlighted in the manuscript in the second digital edition as well as enriching the project metadata. Funding was secured to undertake Spectral Imaging on the Roll (UC Marsden and NTU Global Heritage seed funding grants), in January 2018. Also supported by Global Heritage, the analysis of that data is currently underway and will form a benchmark for the approach to other manuscripts in the group

In January 2018 a digital symposium was held for interested parties from NTU and UC to develop plans for transition into a wider investigation of medieval genealogies. To that end, links between the 12 manuscripts of the ‘Noah’ tradition are being established to determine ‘proof of concept’ and research questions for individual manuscripts formulated. Fortunately all are in public collections, most in the UK.  Efforts are also underway to foster a partner network around the Canterbury Roll with the aim of bringing manuscripts together in a UK-based exhibition on the 600th anniversary of the reign of Henry VI (2021).

Jones’s research, which explores concepts of identity via late medieval chronicles, intersects with his expertise in the history of the manuscript itself. He was a visiting fellow at the University of Heidelberg for a project on ‘Material-Text-Cultures’ (2015) and at the University of Herstmonceaux for Digital Humanities 2014). Since 2010, he has supervised a series of projects on the Canterbury Roll in national and international contexts producing three recent collections of essays. Liang's cutting edge research means that the Roll can be analysed in situ using NTU ISAAC Mobile Lab.

Cross-disciplinary UK collaborations between Hodgson and Liang will produce manuscript-specific research questions for the bulk of material which we have access to in the UK, benefitting our external partner UC and enabling the contextualisation of their project. UC will supply further multidisciplinary digital expertise through their dedicated Digital Humanities Centre under Dr. Chris Thomson and explore the NZ-specific heritage element of the project.

The Canterbury Roll is an object of national as well as international significance, thus the prospect of its physical presence in the UK and the results of the collaboration are an excellent opportunity to generate public interest and impact on the broader heritage sector.

The initial pilot phase of the project is currently underway, funded by a Global Heritage Research grant from NTU and a Marsden seed funding grant from UC Christchurch. The data from the scientific investigated has yet to be analysed but corresponding historical research into similar manuscripts in the UK is already establishing clear parallels with the New Zealand text.

The project has attracted considerable media interest from UK and NZ national newspapers, television and radio, for example:

Further details on project progress and related events can be found on the website for the digital edition here.