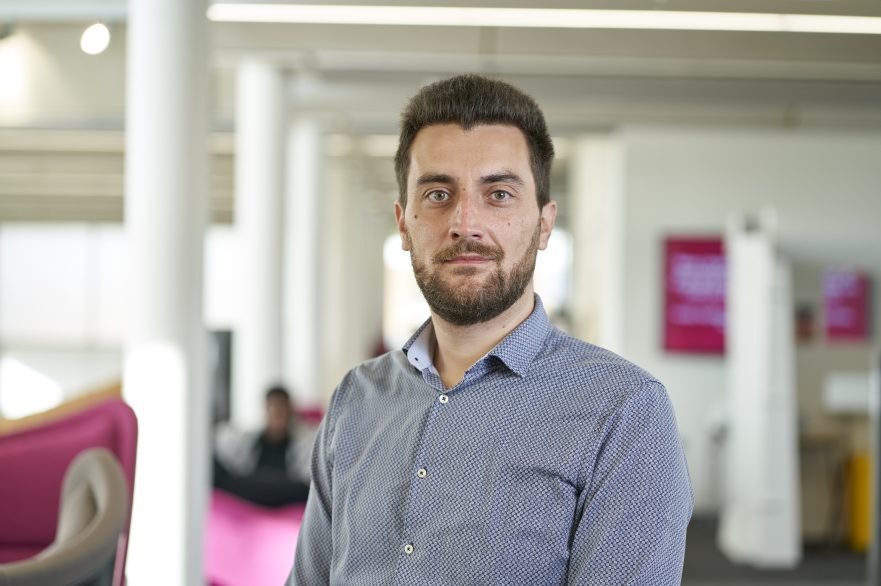 Dr. Frincu is a module leader for the following modules at the undergraduate and postgraduate levels (2021-2022):

In addition, he is also a strand leader for the (ITEC10261) Computer Technology and Maths (Maths strand) module and tutor for the (COMP20091) Applied Mathematics and Graphics module.

Prior to joining NTU, Dr. Frincu was a teaching staff member with over 13 years of teaching experience at the West University of Timisoara Romania, where he led modules related to Big Data Technologies and Applications, Distributed Systems, and Fundamentals of Computer Graphics.

Over the years he has coded in numerous programming languages from Pascal and Visual Basic back in the late 1990s and early 2000s to C, C#, PHP and Javascript in the 2000s, and Java and Python in the 2010s. He has coded 2D/3D simulators in OpenGL/DirectX, scheduling platforms with rule-based and message queue support, full-stack asynchronous solutions (web-server-app), or QGIS scripts. Part of his work is available on Github.

His public research profiles can be viewed here:

Over the years he was a PI/local coordinator for 4 national/international R&D and tech transfer projects focused on smart grids, astronomy software, and mathematical software. He was also member on several other projects on grid and cloud computing as well as on Earth Observation.

His research has been published in top conferences and journals including IEEE/ACM CCGrid, IEEE IPDPS, IEEE ICDCS, Future Generation Computing Systems, Expert Systems and Applications, IEEE Transactions on Cloud Computing, Concurrency and Computation: Practice and Experience. Many of his articles are joint venues with researchers from France, India, and USA.

In addition to computer science-related research, he has also published articles on archaeoastronomy and cultural astronomy in journals such as the Mediterranean Archaeology and Archaeometry, and Journal of Skyscape Archaeology. He also regularly participates in the SEAC conference series and publishes articles as part of the proceedings. Many of his articles are joint work with researchers from Mexico, Armenia, Serbia, and Romania.

His current interests include:

Dr. Frincu is a senior IEEE member as well as fellow and vice president of the European Society for Cultural Astronomy (SEAC).

Dr. Frincu is looking for prospective outstanding students from around the world to work on exciting Ph.D. topics on Big Data analytics (smart grids, image processing in astronomy, and Earth Observation) and cloud computing. There are four rounds of admission per year as well as one chance to get a studentship with a deadline in early January.

For the next round of fully-funded NTU Ph.D. studentships (deadline on January 14, 2022) he is offering two topics:

More details on the NTU PhD studentship can be found here.

Dr. Frincu encourages students to search for and push their limits by exploring current research topics and publishing their results (from the undergrad level up) in international conferences and journals. Students he mentored have gone on to study in top schools such as Wageningen University in the Netherlands, pursue doctoral studies in universities such as the University of California, Berkley, or work for companies such as Amazon UK.

Dr. Frincu is actively involved in synergistic activities including being a guest editor for top journals (Journal of Parallel and Distributed Computing, Concurrency and Computation: Practice and Experience, Internet of Things), reviewer for international journals, PC member in international conferences, and R&D project proposal reviewer.

He has co-initiated and co-chaired 4 editions of the International Workshop on Scalable Computing for Real-Time Big Data Applications (SCRAMBL) collocated with the IEEE/ACM CCGrid top conference.

New! We invite researchers and practitioners to submit their work on smart grids to our Special Issue on the Applications of IoT and Clouds in Smart Grids in the journal of Electronics (IF: 2.412). The journal follows an open-access policy. The deadline for submissions is June 30, 2022.

His research & outreach activities (as PI or co-PI) were funded from various sources (incl. tech transfer and research projects) which attracted a total of over 176,000 EUR:

Dr. Frincu has published press articles, delivered invited talks, and had media appearances on topics involving emerging trends in Big Data and IoT, as well as on cultural astronomy. For his vision on the future synergy between fog and cloud computing in the upcoming smart world see Lifting the Fog into the Clouds in Future Cities (2017 - IBM Think Blog). You can also follow his invited talk on 5G as enabler of the future smart grid at the 2018 International Conference of the Romanian National Authority for Administration and Reglementation in Communications (ANCOM).

He is also running a blog on data science for smart grids where he shares tips on real-life smart grid data analysis, reflections on his own experience, and advice to save energy.

He is available to talk to the press on topics including: