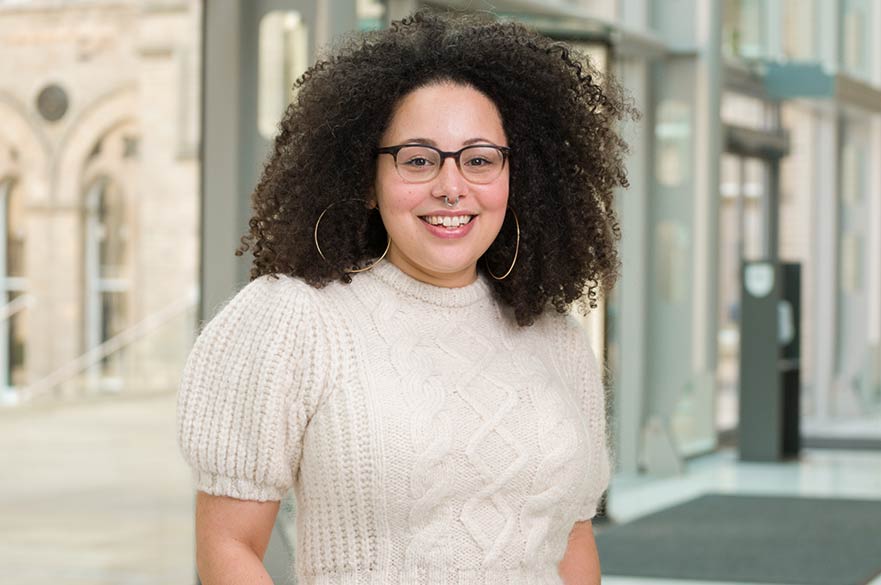 Stephanie Davis [she/her/dey/dem] is a Senior Lecturer in Critical Psychology and Race in the School of Social Sciences. She teaches on a range of undergraduate modules and supervises undergraduate and postgraduate students. Stephanie's research interests include intersectionality - race, gender, sexuality and subjectivity; critical psychology; critical community psychology; post-/de-colonial, black feminist and queer theory; and decolonising psychology and academia.

Stephanie was awarded a BSc (Hons) Human Psychology from Aston University in 2009. She then undertook a part-time MSc Critical Psychology by Research with the Discourse Unit at Manchester Metropolitan University developing her interests in feminist, critical and community psychology, graduating with a Distinction in 2012. Alongside the MSc Stephanie worked in an educational, community development and activist capacity in sexual health education with young people in Salford and racially minoritised communities in Manchester. She also worked on issues facing her local community such as police harassment and sexual and gender diversity. In 2013, she co-founded Rainbow Noir, a social support and organising space for queer and trans people of colour (QTPOC) in Manchester.

In 2017 Stephanie was awarded her PhD Psychology from the University of Brighton. The thesis explored the intersections of race, gender, sexuality and subjectivity, the experience of 'being-in-the-world' and feeling 'queerly raced' for queer and trans people of colour activists in the UK. It considered the possibilities of being in community, resistance to coloniality and the fragmentation of lived experience and identity. Her monograph, Queer and Trans People of Colour in the UK: Possibilities for Intersectional Richness, will be published with Routledge in 2022 as part of the Transforming LGBTQ Lives book series edited by Professor Katherine Johnson, RMIT, and Professor Kath Browne, University College Dublin.

Stephanie is further developing her research with a specific interest in decolonising gender and sexuality, decolonial psychology and QTPOC communities.

Stephanie has been an invited reviewer for the International Journal for Transgender Health and Feminism & Psychology.

See all of Stephanie Davis's publications...