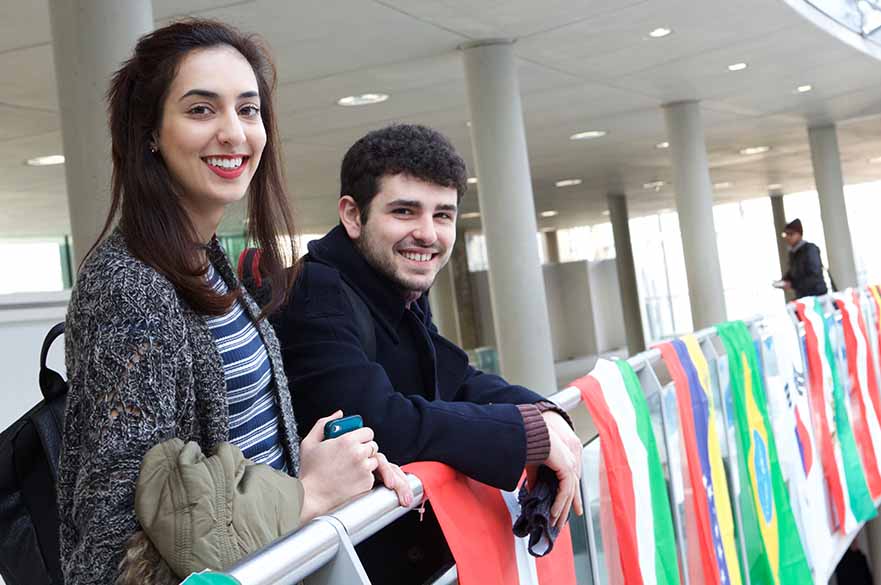 Combine the study of global relations with understanding the past through a range of skills and approaches.

This degree enables you to shape your study according to your strengths, interests and career ambitions. Combining these two subjects gives your degree an international and industry perspective that will make you stand out in the graduate employment market.

Our course combinations are designed so that what you learn in one subject will complement and enhance what you learn in the other. In your final year you can choose to either split your time evenly between your two subjects, or to specialise in one. Our flexible curriculum has been designed to create some amazing opportunities for you too. Your second year of study is divided into two semesters that enables you to take part in optional work placements or go on an international exchange.

By choosing History and International Relations you’ll enjoy the freedom to choose from a wide range of optional modules, depending on your own preferences and interests. These two subjects have natural synergy and will give you a unique insight into the world events that have shaped our lives and how international relationships, beliefs and cultures continue to shape the world we live in.

Why study History and Heritage at NTU?
With hundreds of local museums and heritage sites to visit, Nottingham is the perfect place to develop your skills as a budding historian or heritage specialist.

History is being made right now. It is a living, breathing subject that is constantly renewing, evolving and revealing new information that teaches us about the past, anchors us to the present and informs our future. Historians are passionate, focused, curious, intellectual and open to new experiences and information. If this sounds like you, then read on.

This course offers a broad curriculum, covering periods from AD 700 to the present day, with subject areas as diverse as dictatorship and warfare to youth and gender. We offer a wide range of options so that you have the greatest possible choice of areas to study in depth.

International Relations is the study and understanding of the changing world we live in. It explores relations between states, peoples, social movements, and cultural and religious communities. Its major focus is diplomatic relations – war, peace, conflict and cooperation – but also international communication, terrorism, the role of the media, and protest and resistance to established power.

This course will help you develop a greater awareness of the complexity and connectedness of the processes that shape our worlds. This opens up careers in a wide range of fields in the public and private sectors, fostering the skills, imagination, understanding and flexibility which employers demand.

Our research feeds directly into the course, which means you’ll be learning about the latest issues from world-renowned experts. Our teaching is informed by regionally aligned research strengths in Asia-Pacific; the Middle East; North Africa; and the Indian subcontinent and Europe.

How will I learn?

Each year you’ll choose a range of core and optional modules from the lists above. The first year is normally divided equally between the two joint honours subjects but at the end of Year One, you’ll have the opportunity to select between an equally weighted joint honours course and a more specialised pathway, depending on your interests.

Teaching principally takes place through a combination of lectures, where tutors introduce the key ideas, and seminars, where smaller groups discuss those ideas.

If you’re struggling with a topic or require additional support or guidance, you can arrange to see your tutors in small groups or one-to-one, to discuss essay plans or to seek some specific academic guidance.

It is the nature of the subjects offered in the School of Arts and Humanities, however, that much of your time will be spent engaged in independent study. We recognise that this marks a change of culture from school or college, and we have in place a system of study support to help you adapt to this.

You’ll also have the option to take part in an international exchange at a partner university. These options will enable you to gain impressive international experience, and broaden your perspective and career ambitions.

You’ll experience other cultures, travel the globe and open your eyes to a world of opportunities. Our exchange partnership with a number of international universities enables you to live and study in another country in your second year. Find out more.

Alongside your study you also have the opportunity to learn another new language. The University Language Programme (ULP) is available to all students and gives you the option of learning a totally new language or improving the skills you already have. Learning a new language can enhance your communication skills, enrich your experience when travelling abroad and boost your career prospects. Find out more about the University Language Programme.

A full-time student on average can expect to spend 1200 hours a year learning which will typically be broken down as follows:

This is a major part of the curriculum. Key transferable skills are emphasised and there are opportunities to develop links with organisations and potential employers. Joint honours courses develop a wide range of skills. These include written and oral communication skills, critical analysis and a variety of IT skills. But you’ll also become more self-motivated, be able to work independently and in teams, and develop excellent time management skills.

If you are unsure whether the qualifications you have, or are currently studying for, meet the minimum entry requirements for this course, please contact us before submitting an application through UCAS.

If you need to do a foundation course to meet our course requirements please visit Nottingham Trent International College (NTIC). If you’re already studying in the UK at a school or college and would like to know if we can accept your qualification please visit our foundation courses page.

If English is not your first language you need to show us that your language skills are strong enough for intensive academic study. We usually ask for an IELTS test and we accept some alternative English language tests.

If you have any questions about your qualifications or about making an application to the University please email our International Team for advice.

Ready to join us? Then apply as soon as you can.

For the full-time route just click the Apply button at the top of the page and follow our step-by-step guide.

If you're applying for the part-time route please apply online using the NTU Applicant Portal.

Make sure you check the entry requirements above carefully before you do.

Writing your application and personal statement

Be honest, thorough and persuasive in your application. Remember, we can only make a decision based on what you tell us. So include all of your qualifications and grades, including resits or predicted grades.

Your personal statement is a really important part of your application. It’s your chance to convince us why we should offer you a place! You've got 4,000 characters to impress us. Make sure you use them to show how your skills and qualities are relevant to the course(s) you’re applying for. For more hints and tips, take a look at our page on how to write a good personal statement.

You can get more information and advice about applying to NTU on our Your Application page. Good luck with your application!

Need help with your application?
For admissions related enquiries please contact us:
Telephone: +44 (0)115 848 4200
Email or Ask us a question

Apply as early as you can so that you have time to prepare for your studies. If you need a visa to study here you need to plan this into your application.

Good luck with your application!

Need help with your application?
For admissions related enquiries please contact us:
Telephone: +44 (0)115 848 4200
Email or Ask us a question

Preparing for the financial side of student life is important, but there’s no need to feel anxious and confused about it. We hope that our fees and funding pages will answer all your questions.

We offer prestigious scholarships to new international students holding offers to study at the University.

While we aim to keep any extra study costs to a minimum, please see our page on additional costs and optional extras to find out about any additional expenses you may incur on your course.
Find out more about our terms and conditions of study for this course.
Find an open day
Take our Virtual Tour
Order a course brochure
Order a prospectus
Apply
["700345"]