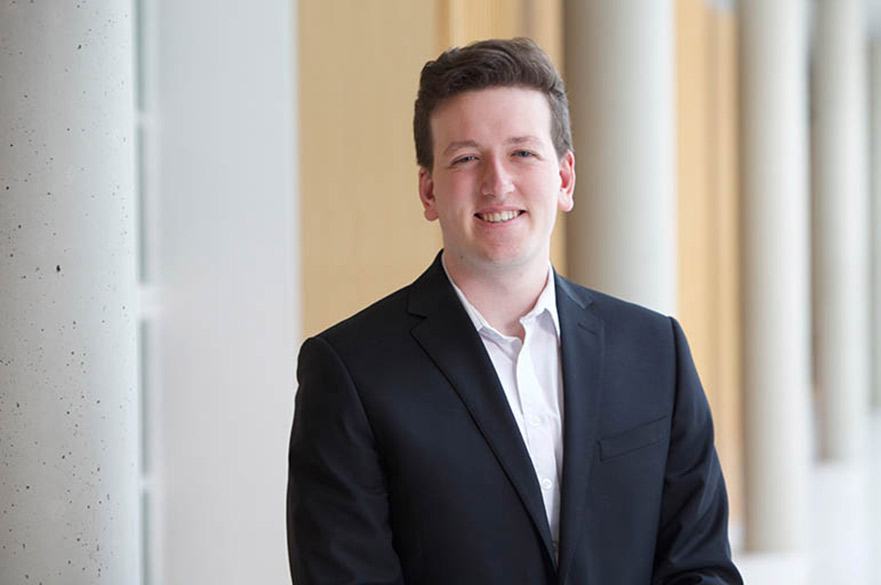 All of the lectures are taught in a courtroom so it's not really possible to forget what subject you are studying!

I decided to study the Graduate Diploma in Law after initially studying Social Policy at the University of Birmingham. I had heard through a friend of mine who had previously studied the GDL at NTU that it was a fantastic institution to study at. I also heard from a number of legal professionals in the city who had either studied here or had connections to the school that it was an excellent place to study with good job prospects post-qualification. After researching for myself, I decided to make NTU my number one choice for postgraduate study.

The reputation of the school was a big factor that attracted me to my course, and I also didn’t want to be swallowed up by a larger organisation such as BPP. The GDL course NTU offered seemed much more personal and more akin to my previous experiences at university.

Even before I enrolled on the course I decided I would get involved with the mooting society. I had never done mooting or debating before, although public speaking was a large part of my role in my previous job, working for a youth charity in Birmingham for a year, so I was fairly confident speaking in front of people. It seemed like a great way to reinforce some of what I had learned on the course as well as a good excuse for socialising and meeting new people.

In my spare time when I’m not studying, I am the goalkeeper for the GDL five-a-side team called “Tort Vale”. We play every Sunday against teams from other departments within NTU. I also play cricket with a club outside of NTU.

In my role as a student ambassador for the University I helped deliver an insight day into careers in the law for local college students. This involved helping students prepare for a mock trial which was great fun as well as an excellent way to experience what I had learned throughout the course.

Having lived in Nottingham before, I knew that it was a great place for young professionals in general given the vibrant night life and restaurant scene. I found the students to be even more friendly and sociable than I was expecting. When wanting someone to go to the pub with on a Friday after a hard week of study, you are never short of any takers.

My greatest achievement at NTU so far has been winning the GDL mooting competition. It was very competitive and a considerable amount of work, so to win it was incredibly satisfying. The experience was extremely enjoyable once the initial nerves were out of the way.

The courtrooms are quite an attractive feature of the University’s facilities. All of the lectures are taught in a courtroom so it’s not really possible to forget what subject you are studying!

I have not yet had to use student support at all at the University, although I have found the staff in the library to be very helpful, especially when looking for obscure law reports!

I log in to NTU’s Online Workspace (NOW) almost every time I study as all of the lecture notes and seminar sheets are saved on there. I also find that the recordings of lectures available on NOW have been particularly useful when looking to clarify a particularly confusing point.

I have decided to pursue a career in family law following the course and am looking to work as a paralegal in this area to gain hands-on experience before deciding my next move.

In terms of advice for students, I would say to take advantage of the many different opportunities there are, not just within the law school but the University more broadly.