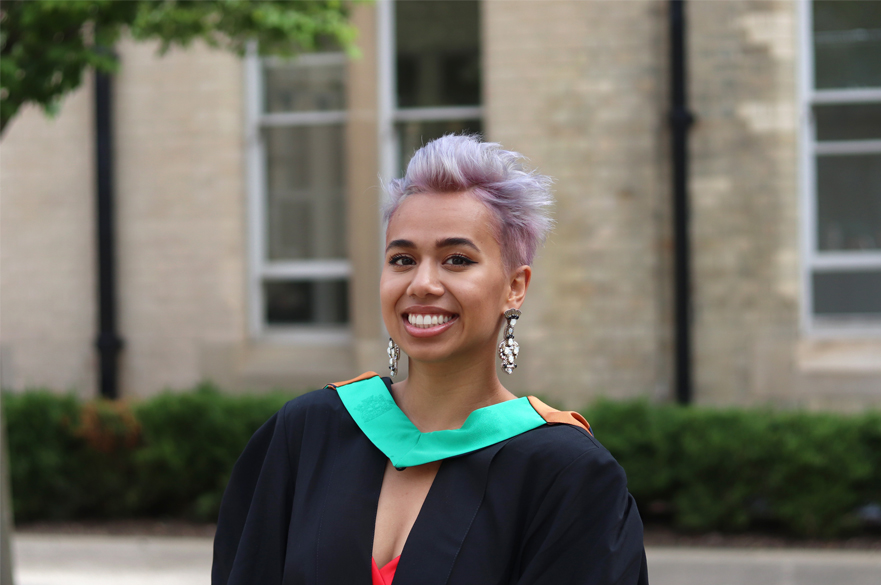 I feel confident knowing that this course gave me a well-respected degree, which also has transferable skills that I can apply to so many careers outside the sphere of law.

My experience at NTU

As a Canadian student, the opportunity presented by Nottingham Trent University’s (NTU) European Law dual degree course – to study both in Nottingham and in the Netherlands, while earning a Bachelor and a Master’s in law in three years was astounding. I wasn’t certain whether or not I wanted to practice law as a profession, but I have always been passionate about human rights. The option to take a Human Rights class in my second year at NTU, and go in-depth for my Master’s at Radboud (which specialized in International Human Rights Law and Migration) made this degree applicable on an international level, and in many different disciplines.

At 18, I graduated from high school and moved to Nottingham from Vancouver, Canada. I was full of nerves to be so far from home, experiencing a new culture, and transitioning to higher education. I had never been to Nottingham prior to my move-in day at Gill Street, but in my first night I bonded with my flatmates (who later become some of my best friends) in a night out at the Students Union.

When choosing a course to study, I found it particularly important to have a degree that gave me the freedom to choose a variety of different types of employment after graduation. With the advent of technology and self-publishing platforms on social media, so many millennials are creating new jobs that didn’t previously exist. I feel confident knowing that this course gave me a well-respected degree, which also has transferable skills that I can apply to so many careers outside the sphere of law.

My favourite module was Human Rights with Tom Lewis. He gave impassioned lectures, fascinating real-life examples for pressing legal issues, and brought the black-letter law alive. The class reaffirmed my passion for human rights, and fascination with the ways in which people worldwide regulate the protection of people’s rights. Some of the legal themes we studied on the course were the philosophical underpinnings that created the foundations for the law, the political and legal enforcement of treaties and conventions, and the balance and negotiation between competing human rights.

My dissertation focus was written on the human rights of Indigenous peoples in Canada, with a focus on international law. My question was: Concerning extractive projects on ancestral lands: to what extent are Canada’s consultations with Indigenous communities adequate, as stipulated by requirements in Canadian law, International Law, and Indigenous Legal Traditions (and why is there such a disconnect between legal systems)?

My course helped expand my international perspective through both academic learning and invaluable life experiences. Through a European and International legal perspective, I was able to learn how different countries protect human rights in their respective societies. Beyond the topics I learned in the classroom, were the amazing international experiences offered by both Universities I attended in my dual degree. Through NTU’s mooting team, I had the opportunity to travel and debate in Ireland, and move to the Netherlands in third year to study at Radboud. At Radboud I had the opportunity to join a Model United Nations team, and compete at Oxford University and Harvard University in the U.S. When I moved to Nottingham, I hadn’t anticipated the breadth of international experiences that awaited me during my short three-year degree. For any students interested in working in an international capacity, this course is a great opportunity to expand your horizons.

I would highly recommend studying here to all students, but especially those who are ambitious, hardworking, and aren’t yet certain about their future career aspirations. Achieving a 2:1 in second year was not easy, and the Master’s degree at Radboud in my third year took its share of late nights, but both were more than worthwhile. I wasn’t sure where this degree was going to take me, but what I’ve learned is that a Law degree is a premium springboard from which to launch a career in so many different disciplines.

Currently I am a journalist with the National Observer, an independent, award-winning, Canadian news source. My political and legal writing covers a broad range of geographical regions and subject matters within Human Rights. These include topics such as analysis of the intersectionality of rights-based movements within the fight for gun reform, to a narrative piece on my experience volunteering in a Calais refugee camp, as well as over 30 articles on the Kinder Morgan pipeline expansion controversy, with a focus on the grassroots opposition. As well as articles, I have started creating Facebook Live videos, some of which have garnered up to 70,000 views.

My legal training at NTU gave me the expertise to follow, analyse and explain court proceedings with ease. As a result, I was hired right out of university as a journalist, to cover the court proceedings I had written about in my Master’s thesis. Returning home to Vancouver, and being able to meet the parties fighting our local pipeline conflict brought my human rights studies to life, and allowed me to do in-depth work, covering the same issues in my capacity as a journalist.

Studying this course has allowed me to write higher quality articles, and delve into a deeper analysis with my writing. While at NTU, I was the editor for human rights topics at a legal blog called Legal Loop, which further nurtured both writing skills and my legal analysis.

Attending a Mooting competition at Queens University in Belfast in my second year was one of the most difficult and rewarding challenges I faced at University. The subject matter was complex, the legal research was heavy, and the competition was fierce – but after five days of intense cramming and two days of hard fought debates – tying against Queens Belfast was a feat I’ll remember.

The city of Nottingham

The community in Nottingham is welcoming and hospitable. My parents still gush about their first meal in Nottingham when the owners kindly chatted with them, sharing parenting advice and comforting them about leaving me for my years abroad.

Moving from a big Canadian city, I wasn’t sure what to expect from Nottingham, but after living there for two years I lovingly consider Notts my second home. The central green spaces like the arboretum, and Wollaton Hall offered the nature that I craved from Canada. The city centre has fantastic shops, hipster cafés like 200 degrees, and artsy neighbourhoods like Hockley – all while still offering a quiet space to read and find solace at the incredible Bromley House library downtown. There is so much to love about living in Nottingham, and I cannot wait to return for my graduation this summer.