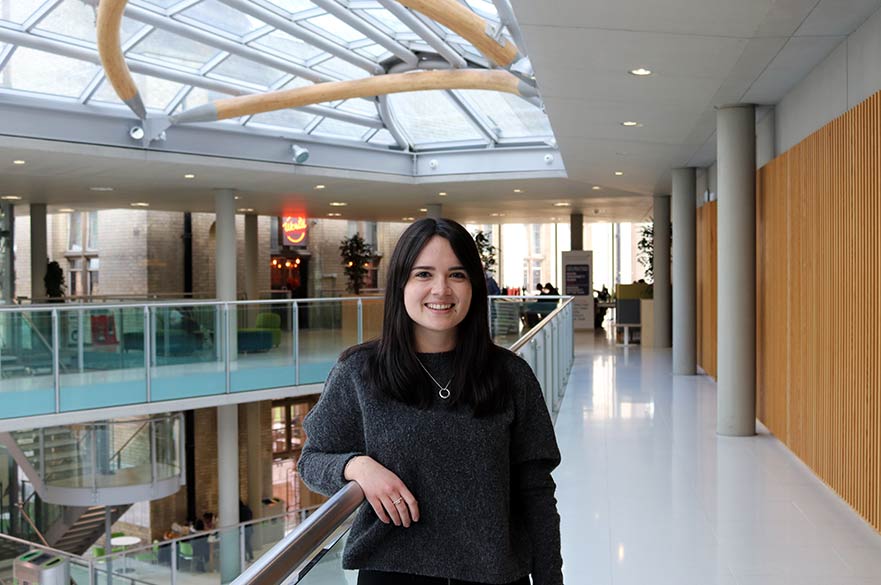 I think the important features of the MSc was its uniqueness... Also, the fact that the placement was guaranteed due to the relationship that the Department of Psychology have with local NHS Trusts.

"I hadn’t really even thought about doing a postgraduate course at all, I just wanted a change of scenery from the job I was doing at the time. I must have just been looking online at jobs or something and stumbled across the MSc Psychology in Clinical Practice. I thought it looked interesting so I applied and didn’t really think much more about it. It was right at the back of my mind as just one of my options to get out of the job I was in. I don’t think I ever thought my application would go anywhere. Then when I was offered an interview I was so shocked, but I looked into the course, the university and the city much more and realised that it looked right up my street and at this point I started picturing myself in Nottingham, at NTU and doing the course I’d applied for! Then when I came for the interview day I just loved the city and the atmosphere of the Uni campus, the interview day was so interesting, the tutors all seemed lovely and I decided that I definitely wanted this to be my next step."

"After my undergraduate degree in “Psychology with Clinical Psychology” I knew that I needed to get a job related to clinical psychology if I wanted to pursue it as a career. I moved home after graduating and got a job as a Healthcare Assistant in an acute female psychiatric ward. It was a huge learning curve and such interesting experience but I always tell people, “my brain got bored” and I just really felt like I needed something to wake it up, and there’s nothing like an MSc to do that for you!"

"I had a few friends from home who came to NTU for their undergraduate degree and so I had heard them talk a lot about it. They always said how much they loved it, how lovely everyone was there and how the Campus was such a nice place to be."

"I think for me it was weird because I didn’t even really want to do an MSc, so it’s not like I was shopping around loads of different universities to find one that suited me. I came across this course completely accidentally and the aspect that made me realise I wanted to do it was probably the placement that the course involved – a six-month placement within a mental health service in Nottingham. This was literally the most exciting thing I could have thought of."

"I think the important features of the MSc was its uniqueness. There was no other MSc in the country, at the time I applied, that provided you with the opportunity of a six-month placement in a local mental health service. I was just dying to work with some psychologists after spending a year working in a nursing team full of people who didn’t understand psychology! So I think it was the thought of being embedded in a psychology team that was important to me. Also, the fact that the placement was guaranteed due to the relationship that the Department of Psychology have with local NHS Trusts. Other courses that offered placements often required you to find them yourselves without any benefit of relationships that were already there."

"For me I think the most attractive thing about NTU was its modern facilities and just cleanliness to be honest. It was also obvious just how many facilities there was to use. This was a breath of fresh air for me after three years at a University where you had to fight for a space in the library. Realising that not only did you have the library for 24 hours at NTU, but also other buildings, like the Chaucer Building, where you are able to use any room any time of day as long as there is no teaching in there. This was made easier too because you can look up online or on the NTU app which shows if specific rooms are busy or not."

"The pure amount of time I spend in the library shows how much I love it there. The atmosphere is perfect and there are so many different rooms for whatever you want. The Postgraduate room has been mine and my friends’ saviour throughout the whole year – there is always space in there. And when I take my laptop and my friends are using the university computers we can still sit together! Plus the people who work in the library café know our drinks orders now so that makes us feel at home! Student Support Services have been so helpful and they are always at the end of an email whenever you need them. The Students’ Union has been really good both during the day, a casual place to see friends or do some Uni work, and is really good in the evening. Good value for money too."

"When I first started at NTU I didn’t have a clue what was going on with NOW, having used Blackboard for 3 years I couldn’t get my head around it at all. When they said we had a seminar to figure it all out I thought it was ridiculous but it literally helped so much and now it’s the most intuitive thing ever. It’s dead easy to get around and make sense of, with all the different information for the different modules together! Also through NOW you can access OneDrive which is the most useful thing in the world."

"It’s weird because I don’t really feel like I’ve achieved much going along one day at a time but then looking back over the last six months I have done so much that I never thought I’d do. I’d say at the moment that conquering one of my biggest fears and achieving a really good grade in presentation assignments is probably my proudest thing so far. Then also I’d say entering a completely new environment at placement; walking in without knowing anyone was actually terrifying for the first few days and I think looking back, getting on with that was a really big achievement too."

"I don’t think my career plans have changed really, I thought I knew I wanted to train as a Clinical Psychologist before. I think I was a bit nervous being in a psychology role in the NHS because I was scared that if it wasn’t what I thought it was going to be like, I didn’t know what else I would do. But the placement really helped me decide that it is the career I want to go into so it is just as valuable that it’s confirmed my career plans for me!"

"When I finish the MSc, I’d ideally like to find a job in a psychology role. Hopefully, that will be as an Assistant Psychologist, a Psychological Wellbeing Practitioner or a Research Assistant. I have already done the role of a Healthcare Assistant in a psychiatric setting so ideally I wouldn’t want to go back to that but I’m not really too fussed at the moment because it’ll all be really valuable experience. Then, hopefully after I’ve secured that job, I’m going to apply for the DClinPsy in the autumn, and every year after that until I’m actually successful."

"I think it’s difficult because our course is very small so to start with I thought that was going to be everyone that I interacted with. Which isn’t a bad thing at all, don’t get me wrong we all get on so well it’s a lovely course! But then we realised that we shared many non-course-specific modules – like research modules – with other postgraduate psychology courses. This involves some group work with other cohorts too so overall it’s a perfect balance of atmosphere on our course; both getting to know each other really well but mixing with others in an academic sense too."