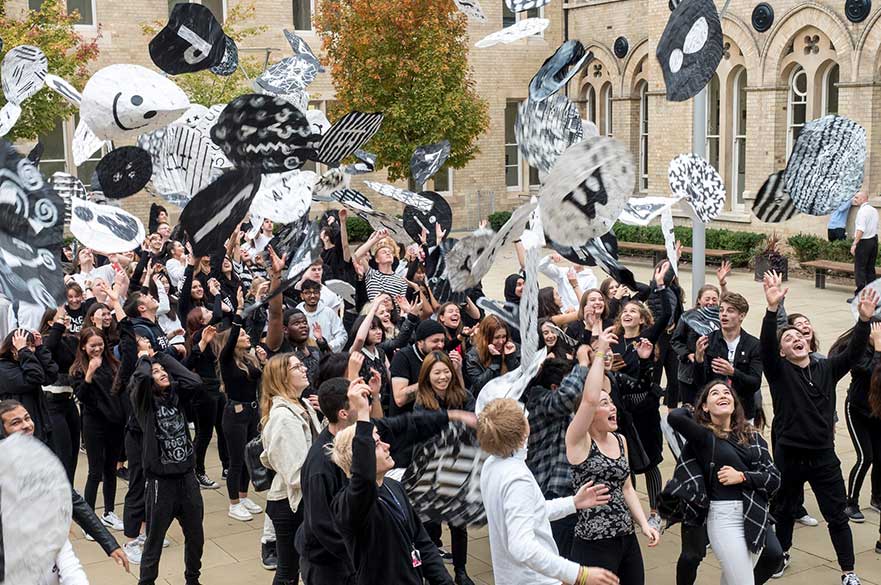 The flash mob in the Benefactors Court. Photo Sara Corvino.

Students who have recently joined our BA (Hons) Graphic Design course staged a flash mob on NTU’s City Campus this October, to mark their arrival. Following on from last year’s inaugural flash mob, the event has become a key part of the students’ induction to the course.

During their first week of workshops, the students were tasked with designing and making a large circular shape, to be worn on their heads during the flash mob. Inspired by their initial explorations of mark-making and visual communication, the identically sized circular shapes each depicted a letter and an emoji - a now prevalent universal iconography.

On Friday 5 October at 3pm, the students congregated outside Newton, donning black and white, and their emoji heads. They then proceeded to Newton, and ended up in the Benefactors’ Court, in a fascinating and performative flash mob which attracted lots of attention on campus and caused a stir on social media.

Graphic Design lecturer Ellie Wild told us: “Each year we run a project with our first year graphics students that makes a good impression and a bit of a mark!” Fellow Graphic Design lecturer Helen Merrin explained: “We introduce new students to basic visual language and, in turn, visual communication skills. We encourage them to begin to consider how to communicate something specific using visuals. Through a set of simple tasks, the students make marks that lead to repeat patterns, and then become visual shortcuts and interpretations of ideas.”

She continued: “When they come together for the flash mob, all 146 students will make a spectacular crowd through their own interpretations of emoji faces and words. The students remain anonymous, except through their visual choices. The circular repeat of the head format hints at universal feelings and expressions that are familiar to all. And beyond that, the removal of complex facial features and the idiosyncrasies of 146 different people unites the group, thus making a spectacular visual image stopping passers-by in their tracks and announcing the arrival of our new students!”

She added: “There are serious reasons for doing what we're doing, but in the end it's about a joyful and memorable first week that challenges expectations, surprises the students and allows individual and group achievement. And the Graphic Design community is strengthened by sharing these experiences.”