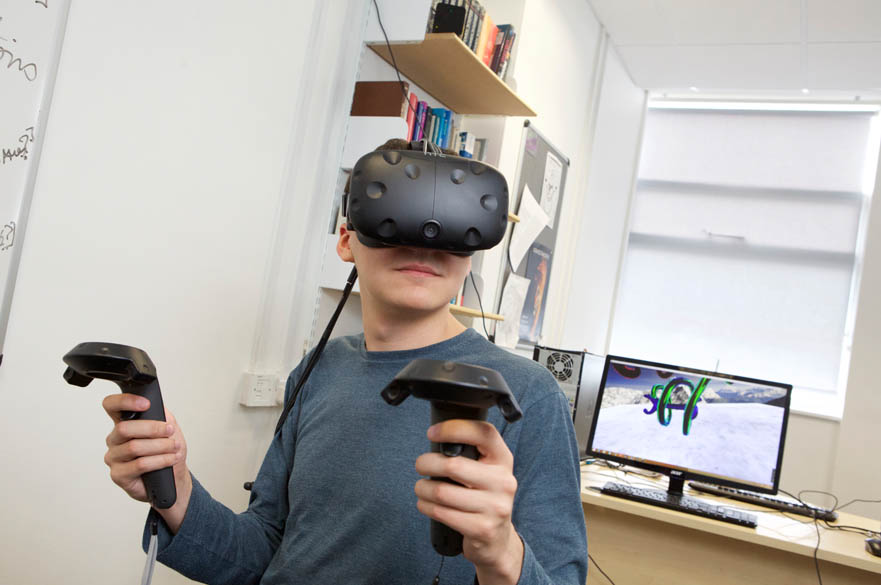 The Design for Health and Wellbeing research group is investigating how the Microsoft ‘Kinect’ can assist with the rehabilitation of facial paralysis caused by a stroke after being awarded a NIHR i4i grant to build a prototype system which uses an avatar to give real-time feedback to patients and clinicians.

The system will automatically detect and track asymmetries on either side of a patient’s face – such as mouth corner, eyelids and cheeks – while they complete their routine facial exercises. This information will be shown on a TV or computer screen to give immediate feedback to the user. The system will also recognise the differences between an undesirable one-sided unilateral movement and a desired symmetrical movement, across both sides of the face. This information would then be conveyed via the TV using an animated representation, or avatar, of the patient.

Using the avatar as both a visual and oral communicator, the system will take the patient through a series of exercises and indicate the degree of success. It is hoped that the information will also be sent electronically to a clinician to allow them to track the patient’s progress.

It is anticipated that this will provide considerable improvements when compared to the traditional method currently used, where patients are provided with a series of exercises on printed paper, so they are unable to assess on a daily basis whether they are making improvements or performing the correct movements.

It is hoped that improved rehabilitation will be achieved through two methods; firstly by the patient themselves getting real-time feedback on position and magnitude of asymmetries on the face, along with their changes over time, thus showing where to concentrate their efforts. Secondly, the therapist will get to see data produced whenever the patient exercises. This increased data should help improve diagnosis and planned recovery.

Philip Breedon is Professor of Smart Technologies at Nottingham Trent University and leads the Medical Design research group. He is a Chartered Engineer and Chartered IT professional, holding a number of journal editorial positions. He chaired the first International Design for Health and Wellbeing conference in 2014.

The project, which is in partnership with University of Nottingham, Nottingham University Hospital, Nottingham City Care Partnership and Maddison Product Design, has been funded by an esteemed National Institute for Health Research Invention for Innovation (NIHR i4i) grant. Due to commence in April 2013 for 18 months, the research group are aiming to create a prototype that can eventually be mass produced.

The device will consist of an interface box which runs the software and is linked to the Windows Microsoft ‘Kinect’ and the patient’s TV or PC monitor and it is hoped that if it is proved to be effective will be available as part of rehabilitation interventions. The daily recommendation of stroke rehabilitation for facial paralysis is 45 minutes. We’re hoping that this technology will not only help to reduce the burden on the NHS but more importantly improve the quality of life of stroke survivors, providing them with encouragement and recognising the accomplishments during their recovery.