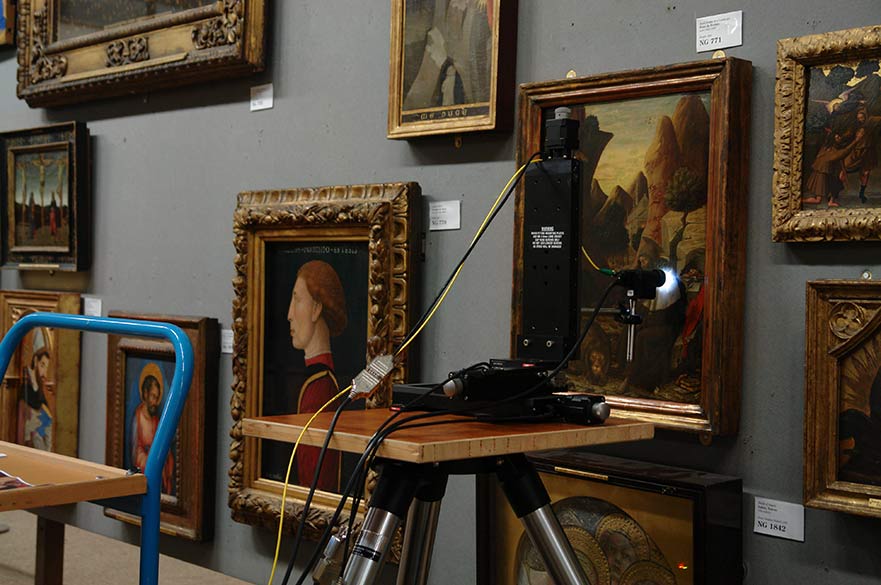 The Optical and Material Properties of Conservation Varnishes for Paintings

Around the time of the 19th century, a transparent varnish coating would typically be applied to the surface of a painting as a liquid film and left to dry. These coatings have the function of both providing some protection to the paint layer and more importantly improving the appearance of the painting and saturating the colours. Traditionally, the varnish solutions used would comprise of naturally sourced resins dissolved in a solvent, with dammar and mastic being the most relevant natural resins to conservation in Britain today. Such varnish coatings however, undergo chemical reactions and deteriorate over time, becoming more hazy and yellow with age.

Thus, to preserve the desired appearance of a painting, the removal and replacement of the varnish layer is required, however, such actions present a risk of causing damage to the paint surface. Prolonging the lifetime of the varnish layer has therefore been of extreme importance in the field of conservation. Throughout the 20th century several more stable synthetic alternatives to natural resins were introduced but these varnishes often did not hold the desired properties, both lacking the same visual qualities and mechanical properties. For these reasons many conservators still favour the less stable natural varnishes.

To try and address some of these issues, conservators have applied various techniques when using synthetic varnishes, modifying the varnish properties through adjustments to the varnish formulations and application in an attempt to emulate their natural counterparts.

The Study will focus on the use of non-invasive in situ-methods; primarily the use of Optical Coherence Tomography (OCT) in conjunction with techniques such as Nuclear Magnetic Resonance (NMR), spectral imaging and Atomic Force Microscopy (AFM).