The main question about almost every medieval Hebrew illuminated manuscript is related to the authorship of its artwork. Oppenheimer Siddur (Oxford Bodleian Library MS Opp. 776) is a richly illuminated 15th-century Hebrew book of daily prayers according to the Ashkenazic rite of the Rhine region that belongs to the collection of the Bodleian Library. Information in the scribal colophon of this manuscript tells us that Asher ben Yitzḥaq finished copying the prayer book in 1471 for his family to use and therefore is classified as user-produced. The scribe’s hand appears in neat, semi-cursive Ashkenazic script throughout this small-format manuscript, written on fine parchment that has been scraped on both sides to achieve an equalised texture.

Despite the visually attractive qualities in the scribal work and illuminations, the self-made character of this manuscript is evident in the numerous copying mistakes and corrections made by the scribe, which would not be expected in the work of a professional copyist.

The manuscript contains high quality illustrations of flora and fauna, a wide range of colours, and evidence of liberal application of gold in the illumination process, much of which has flaked off over time. It is clear from the contextualisation of the elements in the iconography that the illuminator had access to artists’ models that were in circulation in the 15th century, and was aware of the connotations as well as the forms of motifs adapted from contemporary Christian visual cultures.

The amount and quality of artwork, combined with its documented user-produced provenance, make the Oppenheimer Siddur a rarity among extant Hebrew manuscripts. Yet although we know that Asher ben Yitzḥaq copied his own prayer book, the colophon does not confirm who artist was. Prior deductive analysis suggested that the scribe-owner may also has been the manuscript’s artist, based on common motifs and an apparent shared colour palette appearing in both texts and artwork. The aim of this project was to use non-invasive scientific analysis to uncover evidence of the planning process and relationship between pigments used in text copying and artwork production in the manuscript. 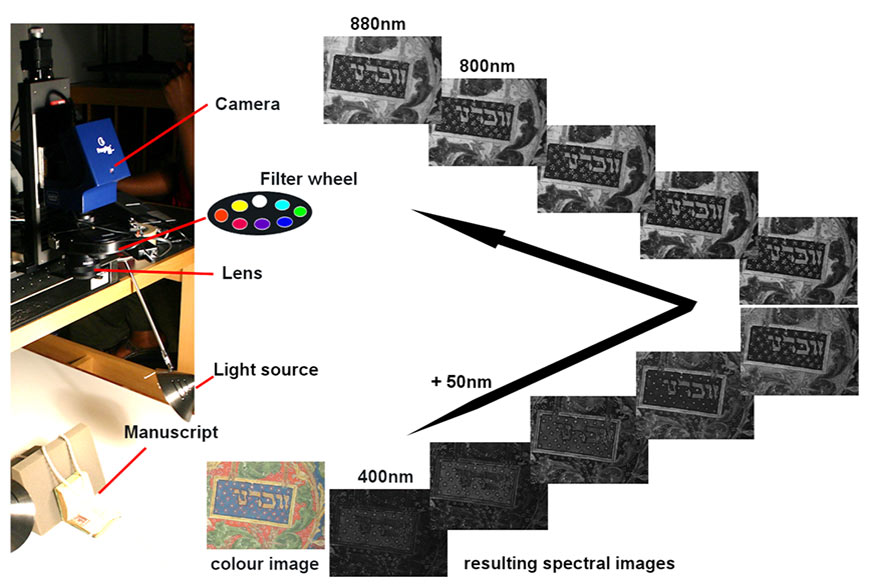 Imaging of the Oppenheimer Siddur using a modified PRISMS spectral imaging system at the Bodleian library. The image cube consists of 10 images captured with 10 filters between 400 and 880 nm

Non-invasive analytical techniques were employed to gather data on a limited range of folios in the manuscript.

Spectral imaging was performed by the ISAAC mobile lab using our in-house developed spectral imaging device (PRISMS) modified for close-range application to image two of the folios to examine the sequence of production, identify the pigments and compare the materials used for the illumination and the text. Optical microscopy and Fourier Transform Infrared spectroscopy in the attenuated total reflection mode (FTIR-ATR) were used directly on the folios to complement the spectral imaging data in binding media and pigment identification. 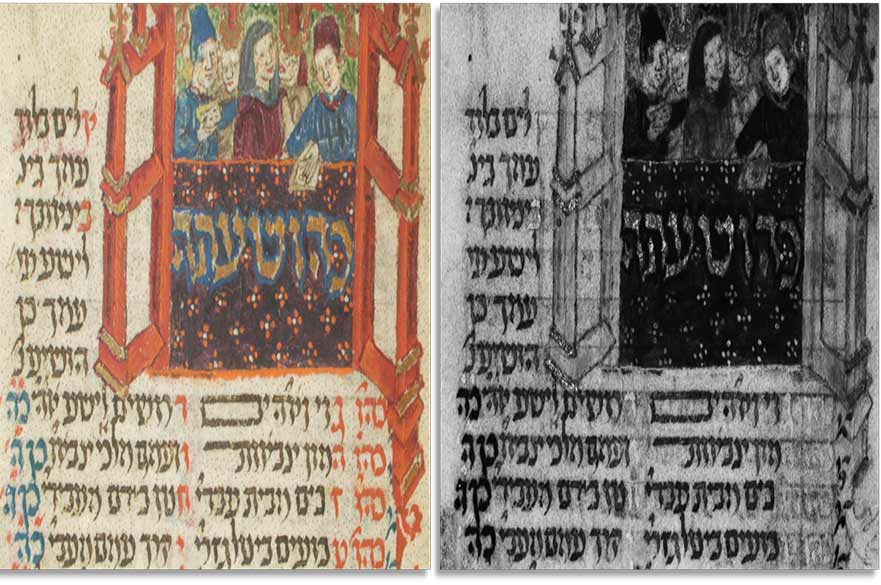 Part of folio 83r imaged with the modified PRISMS spectral imaging system; a) colour image derived from the spectral image cubes for CIE D65 illumination and 2 degree standard observer; b) spectral image at the near- infrared ( 880 nm) band.

The results revealed close matches in reflectance spectra for the colorants and inks used in both text copying and illuminations, suggesting that the same mixture of colorants and inks have been used. The spectral imaging in the near infrared bands revealed hidden underdrawings, indicating a design change during production of the manuscript, and the outlining of letters prior to coloured pigment being applied.

The pigment use, the variation in the binder for different pigments and some elements of its production were found to be consistent with those described in historical sources. The evidence from this study supports the hypothesis that the scribe applied pigments for the manuscript’s artwork at the same time he did some of the scribal work which has implications for understandings of Jewish medieval visual cultures.