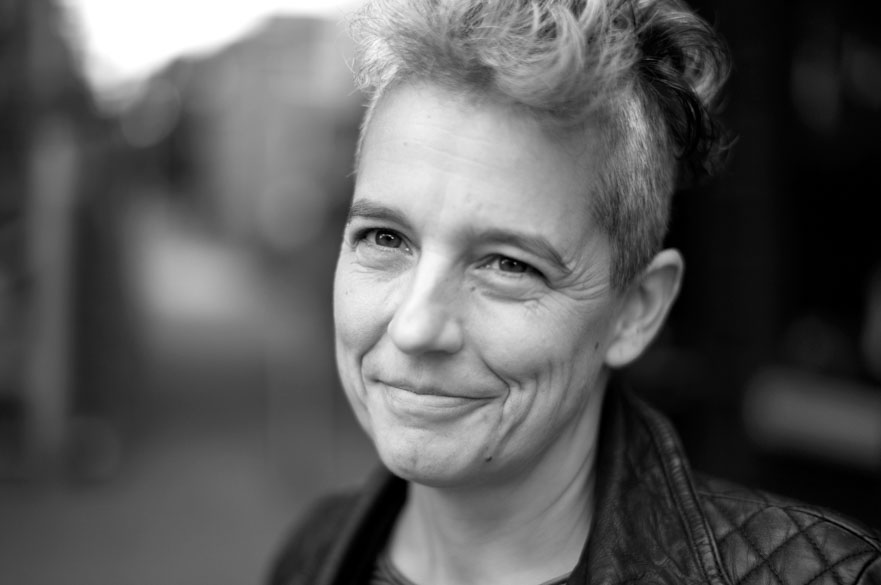 As Course Leader, Dr Katja Hock is responsible for the MA Fine Art course and MFA in Fine Art courses. She also runs a reading group open to MA students from all disciplines and works and supervises PhD students. The field of supervision addresses specific themes, please see the projects described under 'Research'.

Dr Hock is interested in supervising PhD students, if you are interested please select the Research tab to see more information about her research field.

During and after her studies in Germany and the UK, Dr Hock has worked as a freelance photographer and artist, providing her with useful skills and information to prepare students for their 'life' after their studies at NTU.

The work produced and developed throughout the years are to be seen as interlinked and interwoven. Themes reappear and are addressed again taken into account experiences made in the meantime. In her work Dr Hock aims to develop a practice, which is a reflection on the medium of photography and film itself while at the same time creates a place for the viewer to be drawn into the image at an imaginative level.

Space is itself considered as being formed by people through their occupation of it and Dr Hock aims to show how still and moving image, in its representation of physical environments, frames and refers both to human presence and to transience.

Current projects:For numerous years Dr Hock has been photographing and filming in woodlands. The first woodland she worked with was related to her personal context (please see below Undergrowth).

Stille Fragmente – Landscape and Memory, an investigation addressing the importance of historical memory to our present perception of our cultural and social context. Stille Fragmente is the latest in a series of works where she explores the relationship between what is visible and what is suggested, between what is recorded and what lies hidden ready to be imagined by the viewer.

Recently shown at the Lakeside Galleries in Nottingham, the work invites the viewer on a journey through public woodland, focussing on the mundane yet beautiful using still photographs combined with almost-still moving images. This process, where particular sites recur in several images (sometimes visibly made at different points in time) and where the still can be mistaken for the moving image, brings into question the idea of rooted memories and suggests instead a place of transience and change. The illusion of looking into a space via three screens presented in triptych-like manner invites to viewer to undertake not only a visual but also a physical journey while walking and tarrying within the gallery itself. View the work.

This work is linked and informed by her photographing and filming in the Serpentara woodland in Olevano, Italy – a woodland saved by artists, who painted and drew this woodland in the 18th century – from being eroded. Here Dr Hock is interested in how these different registers of meaning and memory are simultaneously present in her encounter with a landscape, and in exploring through what means photographic representation can attest to the memory or past of a landscape, as much as recording the moment in which it was taken. The Serpentara woodland has since been a part of Germany; the adjacent villa is used by the Kunstakademie Berlin for artist scholarships and residencies. During the Second World War, the near by Villa Baldi has been used by German military as a form of headquarter, but Serpentara has not been used. The wood itself has been left more or less to its own device, fostering an almost ghostlike appearance, prompting a metaphorical parallel to the photographic medium itself which always habours, according to Siegfried Kracauer, its referent's past presence.

The woodland on the island Vilm was, at the beginning of the 19th century, also saved by artists. During the Cold War, Vilm was part of the DDR and the island was used as an exclusive holiday resort for politicians of high ranks. The woodland was not managed but also left to its own device, thereby creating an almost fantastical wilderness, now being explored and researched by many scientists and serving as a source of inspiration for many artists.

Both of these woodlands share some historical aspects, their current state of wilderness are both interwoven with post war political shifts and developments.  Photographing on Vilm, the photographed woodland becomes a site for exploring how individual and collective memory have the capacity to affectively rupture the experience of the present, or how the memory of one landscape can affect the experience of another. How can photography and film reflect on the past experiences of childhood as well as collective memory of place whilst also recording the here and now?

- Foreign presence/Legoland – Collective and Personal Memory in the context of European History; The Presence of the British Military in Germany

This on-going project focuses on the former RAF base Brüggen in Elmpt. This site is one of the last remaining British military bases in Germany. The village of Elmpt changed after the British military arrived and is again going through a process of concrete transformation as the military presence slowly diminishes. Dr Hock repeatedly returns to this site in order to explore the ways in which a specific historical configuration, and specific and changing power structures have formed the base's architectural space and the surrounding landscape and environment.

UndergrowthCommissioned by the Goethe Institute in London, the work represents views of woodland areas along the German-Dutch border. Having grown up on the edge of the border-woods between Holland and Germany Dr Hock's memories of her past experiences of the area have become subject to a lost world of innocence. Researching into the German photographic tradition and its discourses, Dr Hock deliberately uses a method that borrows strongly from scientific photography. As, for example, in the context of medical and forensic photography, the camera is placed facing the object without creating any strange or distorting perspectives. A great depth of field, covering the whole of the photographic plane, also helps to give the impression of an objective representation of the photographed scene. However, she employs a long exposure time, which captures the passing of time through movements visible in the leaves and branches of the trees. Also, the photographic viewpoint is in some cases only slightly changed, giving the impression of things lingering and hidden. The work was shown at the Goethe Institute in London as well as OVADA in Oxford and has since been developed further into slide installations such as Buchenwald, shown in the Frauenmuseum in Bonn/Germany and Stillness and Silence, presented in the Bonington Gallery in Nottingham.

HospitalHere Dr Hock's research interest lies in understanding and representing the ways in which the patient's presence appears as marks and traces on the surface fabric of hospital architecture. It is her contention that these marks and traces can represent aspects of subjective human experience within the hospital, and that these escape the dominant photographic discourses constituted through scientific methods. Hospital was partly funded by an AHRC scholarship and formed the visual part of the photographer's PhD studies. The work was subsequently shown in the Lethaby Gallery in London and at Focal Point Gallery in Southend-on-Sea. The publication included writings by Susan Trangmar and Steve Edwards.

Interior, a portrait of my grandmotherDr Hock contends that the production of space is, in part, formed by peoples' occupation of it. Through photographing a private space she aimed to show how photography in its representation of architectural space frames and refers both to human presence and to the experience of human transience. It is her belief that by showing spaces in which the body is absent, it is possible to produce a heightened sense of the use and ownership of the space. This is because the viewer is given the imaginative space to become involved in the image making process. The work was funded by a DAAD scholarship and bought by the SK Stiftung Cologne in 2001. The photographs have since been shown in several group exhibitions including for example Candida Hofer, Stephen Shore, and Bernd and Hilla Becher.

The International Academy for Nature Conservation (INA) is part of a branch office of the German Federal Agency for Nature Conservation (BfN). It provides a forum for the discussion and solution of national and international nature conservation issues. It is a place for debate among conservation experts and communication between the German Federal Government and the Länder (states). This makes it a centre for dialogue between representatives of many different fields, including: science and public administration, politicians and industry, associations and foundations. We are currently in the process of finalizing the organization of a series of workshops addressing the place of art as a way of nature conservation, historically as well as currently. The first workshop session is planned for April 2015, 2 October 2015 and the final one for May 2106.

See all of Katja Hock's publications...