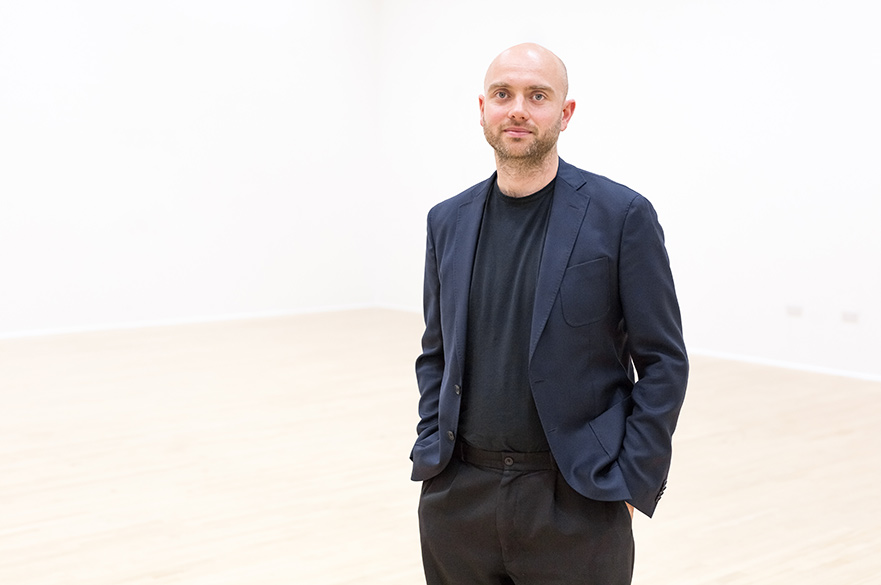 Director of the Bonington Gallery

Tom Godfrey is the Curator of the Bonington Gallery in the College of Art Architecture Design and Humanities. He also teaches across a range of subjects and levels within the School of Art & Design.

Tom studied Fine Art at Nottingham Trent University from 2001-2004. Upon graduation he helped establish the Stand Assembly artist studios in Sneinton, Nottingham (Now resident to Dance 4), and alongside fellow NTU graduates he co-founded MOOT, an artist led gallery that ran from 2005-2010. During its 5-year existence, MOOT gained national and international acclaim for its experimental and ambitious approach to programming and its ability to identify several now prominent artists early on in their career. MOOT received widespread critical acclaim, cited by both The Times and The Independent as one of 5 most promising upcoming galleries in the UK in 2007. It was also regularly invited to partake within international art fairs & projects and subsequently placed works by several artists into major public & private collections. MOOT also won two Nottingham Creative Business awards in 2008 & 2009.

In 2008, MOOT was offered the use of a former Boots factory next door to BioCity, therefore establishing the arts organisation One Thoresby Street.

During this time Tom also worked in London for the former Wilkinson Gallery (2004-08) and curated independent exhibitions at galleries including Airspace in Stoke-on-Trent and Walden Affairs in Den Haag, Netherlands.

In 2008 he established the commissioning programme Keep Floors and Passages Clear that ran until 2010 and featured artists such as Marlie Mul, Giles Round, Scott Myles & gerlach en koop. The project was later exhibited at White Columns, New York and then purchased for the Arts Council Collection, the first curatorial project to ever be purchased for the collection.

In 2010 Tom left Nottingham to complete his MFA at the Glasgow School of Art. Upon graduation he exhibited his work in exhibitions at Cell Projects, London, David Dale Gallery, Glasgow, and CCA, Glasgow before deciding to focus solely on a curatorial practice. He returned to Nottingham in 2014 to open his own gallery TG that is based at Primary in Lenton, Nottingham (Tom is also a Trustee of Primary) that is co-directed with Joshua Lockwood-Moran. TG builds upon previous gallery, curatorial and publishing experience to work with artists in a longer-term capacity, on a range of gallery-based exhibitions as well as publications, international art fairs and off-site projects. Since opening in 2014 TG has gained a strong international reputation for its programming and has been reviewed in magazines and journals including Frieze, Art Monthly, Quietus and The Wire.

Tom began working at the Bonington Gallery in 2014 and became the Curator in 2015 and Director in 2021. The programme that Tom has delivered so far pays close attention to the ‘Art School’ context that Bonington Gallery is situated within, and utilises this in advocation of a multi and post-disciplinary programme. Bonington Gallery is fast re-establishing a local, national and international profile based upon its dynamic, itinerant and critically-relevant programme that has established a platform for creative discourse that is expanding the possibility for creative practice for both our students and wider audiences alike. The Gallery celebrated its 50 years anniversary in 2019 and work is underway to establish its archive and make it publicly accessible.

The annual programme of the Bonington Gallery consists of three main exhibitions that are accompanied by three ‘Bonington Vitrines’ exhibitions. These are also supported by a programme of talks, screenings and discussions and other associated events. The Gallery also runs a Student Curatorial programme that is made up of 10-12 students from a range of subject areas and qualification levels.

In 2015 the Gallery founded and continues to manage the Nottingham Art Map.

Tom is the Founding-Director of TG: www.tgal.co

Links to projects outlined in the career overview can be found here: www.tomgodfrey.co.uk

Tom is a resident and Trustee of Primary: www.weareprimary.org

Independently Tom has received funding from Arts Council England and a wide number of foundations and trusts to support his wider curatorial practice.

Through TG, Tom has published 4 artist monographs on artists including Remko Scha, Stuart McKenzie and Alison Lloyd. These are available to buy from the gallery and bookshops including ICA & Walther Koenig Books, London.