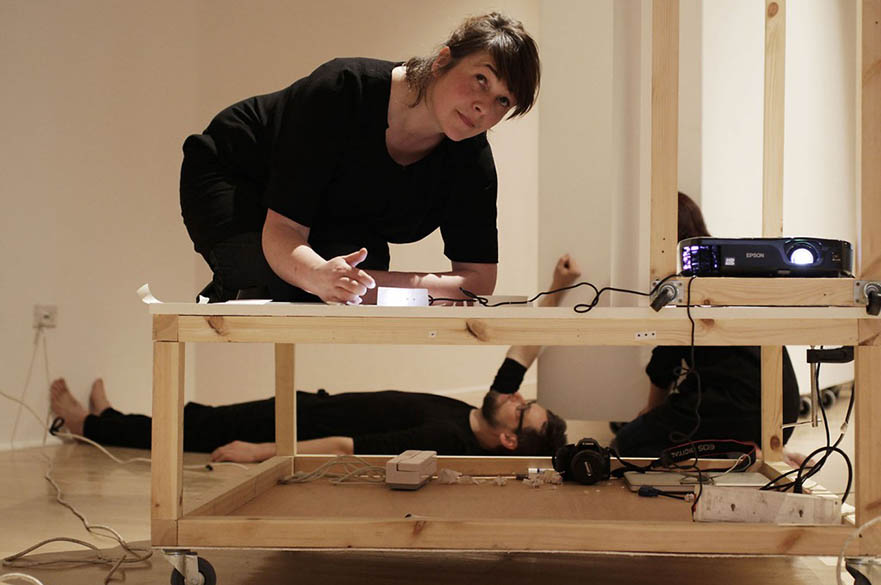 During her 15 years of working at NTU, Emma has taught across the full interdisciplinary Fine Art programme from undergraduate to postgraduate and Doctoral level. From 2011 – 2019 she convened and chaired the Fine Art Contexts Lecture Series, a programme of research-informed teaching for interrogating the critical contexts for contemporary fine art. She currently teaches a series of seminars within the MFA focused on how different language-based practices (reading, writing, speaking) operate within a fine art practice.

The core of her teaching activity is now at Doctoral level where she supervises several PhD researchers, as well as co-leading the programme DREAM (Doctoral Research Encounters in and through Artistic Methodologies) with her colleague Danica Maier. Emma is interested in supervising research students working on issues and questions that resonate with her own enquiries. (See “Research” for more information).

Emma is actively involved in the Artistic Research Centre at NTU (See https://www.ntu.ac.uk/research/groups-and-centres/centres/artistic-research-centre), and has a mentoring role supporting the research activity of colleagues within Fine Art.

Emma Cocker is a writer-artist and academic, with an international research profile involving publication, performance, exhibition and guest lecturing. She joined NTU Fine Art in 2005, having previously taught at various HE institutions. Prior to that, from 1999 – 2004, she was Education Development Manager at Site Gallery in Sheffield, where she was responsible for curating the public programme including symposia and conference, as well as projects, events, and workshops with diverse audiences.

Emma has a BA in Fine Art, MA in Visual Culture and MRes in Contemporary Art History, Goldsmiths. More recently, Emma has trained to be a qualified yoga teacher, and is interested in how a heightened sense of the body and of embodiment - through movement-awareness, attention practices and somatics - might be integrated into fine art teaching and research.

Emma’s research can be conceived as a series of interlocking clusters of enquiry:

Performing Thinking in Action – focusing on the process of artistic endeavour and the experiential thinking-in-action therein, this enquiry asks: How is artistic thinking, thinking-through-doing, thinking with-and-through practice? What is at stake in the shift of attention from the measurable outputs of artistic activity to a heightened awareness of its qualitative processes: the unfolding decision-making, the not-knowing, the navigation of competing forces, the activity of working with/through obstacles or of ‘figuring’ something out? Emma is currently working on a publication called Being in the Midst: Performing Thinking in Action, which considers these interests from a broad and transforming perspective to include diverse fields such as visual arts, performance, choreography as well as expanded language-based practices. How is thinking-in-action performed with and through the body (through dance, somatic practice); with others (through collaboration); with and through drawing; with and through language practices of conversation, reading, writing; with and through material encounters (with objects, with media, with technologies, even with code)?

Aesthetic Practices of Existence – existing in the space between art and philosophy, ethics and aesthetics, this enquiry explores different (artistic) practices that could be considered as ‘practices of the existence’ or ‘arts of living’ where life is conceived as a malleable material that can be approached (in philosopher Michel Foucault's terms) as if it were a ‘work of art’. This enquiry involves the exploration of different tactics and practices through which everyday life is explored in ethico-aesthetic terms, as a creative space of resistance and affirmation, through various practices of attention and awareness, for being-with as well as for being-apart.

Expanded Language-based Practices – this enquiry unfolds restlessly along the margins of writing/art, including experimental, performative and collaborative approaches to working with and through language, using a matrix of writing, reading and speaking practices. Emma’s research is concerned with the critical poetics of language, the visual and physical materiality of language, alongside an interest in experimental reading and conversation-based practices. Emma is a member of the NTU Critical Poetics Research Group - NTU Critical Poetics Research Group. She is co-founder of the Society of Artistic Research Special Interest Group on Language-based Artistic Research. See https://www.researchcatalogue.net/view/835089/835129

Emma often works in collaboration with other artists, as well as operating as an invited critical interlocutor within diverse research projects. In 2019, she was an invited artistic researcher as part of the Research Pavilion, Venice. From 2014 – 2017 she was a key researcher on the international, interdisciplinary research project Choreo-graphic Figures: Deviations from the Line, a collaboration with Vienna-based artist Nikolaus Gansterer and choreographer Mariella Greil (funded by PEEK, Austria). She was an invited critical interlocutor as part of the international research project Weaving Codes – Coding Weaves funded by the AHRC Digital Transformations Amplification (2014 – 2016), extending from her involvement in the previous AHRC research project, Live Notation: Transforming Matters of Performance, 2012.

Previous artistic collaborations include working in dialogue with the performance-based collective Open City from 2007 – 2010 and The Italic I (2012 – 2018), a collaborative artistic research project with Clare Thornton resulting in a series of national and international exhibitions and publications. She has produced numerous artists’ books in collaboration with artists including Rose Butler (Above + Beyond, 2018), Victoria Gray (Manual, 2014), Sara Wookey and Bianca Scliar Mancini (Performing the City, 2012), and Sophie Mellor (Manual for Marginal Places, 2011), and has written essays on the work of various artists including Belén Cerezo (in Seeing Bodies, 2020); Danica Maier (in Grafting Propriety, Black Dog Publishing, 2016), Ben Judd (in Communion, Black Dog Publishing, 2014); Vlatka Horvat (in In Other Words …, Bergen Kunsthall, 2011); Dutton and Swindells (in Institute of Beasts, Site Gallery, 2009); Karin Kihlberg and Reuben Henry (in Beginnings, VIVID, 2012), FrenchMottershead (in People, Places, Process: The Shops Project, Site Gallery, 2010), Cool and Balducci (in Dance Theatre Journal).

Alongside her academic publications (See Publications) and artists’ books, Emma’s writing on contemporary art has been published in magazines/journals including Frieze, Camera Austria, Dance Theatre Journal, The Art Book, Journal of Writing in Creative Practice, art + research and Performance Research Journal. Her writing has been published in Failure, 2010; Stillness in a Mobile World, 2010; Drawing a Hypothesis: Figures of Thought, 2011; Hyperdrawing: Beyond the Lines of Contemporary Art, 2012; Reading/Feeling, 2013; On Not Knowing: How Artists Think, 2013; Choreo-graphic Figures: Deviations from the Line, 2017; The Creative Critic: Writing as/about Practice, 2018, and as a solo collection entitled The Yes of the No, 2016. With Alex Arteaga and Juha Himanka, Emma is co-editor of a Special Issue, “Practices of Phenomenological and Artistic Research”, of the Journal of Phenomenology and Practice. She is currently working on the co-authored publication Live Coding: A Users’ Manual, and a monograph entitled Being in the Midst: Performing Thinking in Action.

See all of Emma Cocker's publications...