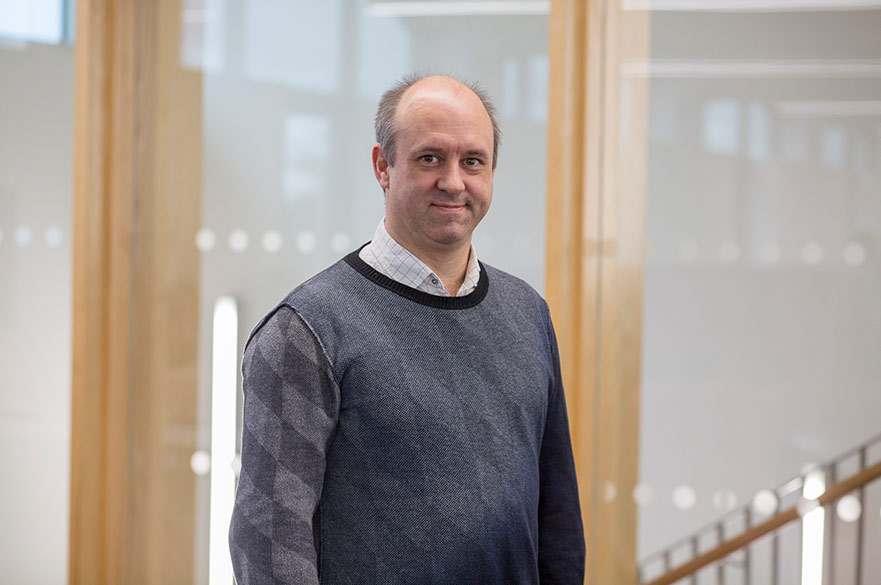 João Filipe Ferreira is a Senior Lecturer in Computing and a researcher at the Computational Neuroscience and Cognitive Robotics Research Group (CNCR).

His main research interests concern the broad scientific themes of Artificial Perception and Cognition in Robotics and IoT.

He is also heavily engaged in technology transfer, namely in the fields of digital electronic systems design, instrumentation and control, in close collaboration with the Laboratory of Automatics and Systems of the Instituto Pedro Nunes (IPN-LAS), Coimbra, Portugal. He was a senior consultant for Wexcedo, an SME whose mission includes the development of innovative solutions for smart houses and the “internet of things”.

João Filipe Ferreira is a member of the Computational Neuroscience and Cognitive Robotics Research Group (CNCR) at NTU, and also an integrated member of the Institute of Systems and Robotics (ISR), a research institute of the University of Coimbra. The CNCR is well equipped with state-of-the-art computational and electronics design and test equipment. Of note is a 500 core HPC cluster; and a range of high specification robots, including an iCUB, Sawyer, and Robotniq. Robotics research is facilitated with a 75m2 robot arena with VICON tracking system.

His main research interests concern the broad scientific themes of Artificial Perception and Cognition.  Within these themes, the following topics receive his main focus: probabilistic modelling of perception, perception and sensing for field robotics in precision forestry and agriculture, and bioinspired perception and cognition for social robotics, co-robotics and human-robot interaction. However, his research interests are not limited to these subjects: over the years, he has also produced contributions in medical image processing and 3D scanning.

João Filipe Ferreira has been leader of several undergraduate and graduate modules (including a doctorate studies module), having lectured to and mentored over 2,000 undergraduate and 30 graduate students since his first lecture. Following an integrated approach to teaching and research, he has also supervised/co-supervised a total of 5 undergraduate students, 11 M.Sc. students, 3 Ph.D. students and a post-doctoral fellow, either as a dissertation advisor, as a temporary supervisor during a visiting spell, or as a principal investigator. He was also a member of over 20 M.Sc. and 1 Ph.D. (thesis proposal) examining committees.

Current topics of research interest include:

Artificial Attention for Human-Robot Interaction: Despite remarkable advances in recent years, cognitive robotics is still lacking an understanding of the essential skills needed for the implementation robots capable of long-lasting interaction with humans in real-world applications. One of the most fundamental skills known to underpin the human ability of engaging in long-term interaction with other agents is perceptual attention, which allows for conveying and inferring intention through redirection of the senses (instilling a sense of non-verbal interaction) and the building of an internal model of the interlocutor's attentional stance, respectively. Potential projects include robust gaze direction estimation, attentional modelling, shared attention modelling, attentional processes in memory management and object of interest estimation in interaction.

Attention and Active Perception Supporting Robot Imitation Learning from Multi-Modal Human Demonstrations: Imitation learning in robots is when a robot is presented with a demonstration of a skill that it should learn to perform on its own. One-shot and few-shot learning is the act of learning to generalise from one or a few number of training examples per class, respectively. Currently, one- and few-shot learning are very challenging problems -- a probable reason for this is that scene task-relevance dictated by both the robot's knowledge of the world and the demonstrator's attentional stance is not explicitly being taken into account in what is clearly a shared attention scenario. Potential projects in this topic involve fundamental research on this issue, namely on how attention can be used to improve the performance of deep learning-based algorithms for robot imitation learning.

Perception Architectures for Agricultural and Forestry Robotics: Despite many advances in key areas, the development of fully autonomous robotic solutions for precision/smart farming and forestry is still in a very early stage. This stems from the huge challenges imposed by many factors, in particular robotic perception. Artificial perception for robots operating in outdoor natural environments has been studied for several decades. Nevertheless, despite many years of research a substantial amount of problems have yet to be robustly solved. Perception in agricultural and forestry robotics faces many challenges imposed at sensor-level by environmental conditions (trees and relief, weather conditions, dust, smoke, etc.), the homogeneity of natural landscapes, the diversity of natural obstacles to be avoided, and the effect of vibrations or external forces such as wind, among other technical challenges. There are also many other challenges that go beyond sensing, including safe operation (for both the robot and other living beings), multi-scale sensing and perception  that allows  the  robot to  tackle  broad-range tasks such as navigation but also localised precision tasks, and covering specialised, expert-informed tasks necessary to achieve the greatest level of autonomy and usefulness possible. Potential projects in this topic include semantic segmentation of forest and farm scenes, development of robust, reusable and flexible perceptual architectures, and cooperative perception solutions for swarm robotics in the field.

Opportunities to carry out postgraduate research texist and further information may be obtained from the NTU Graduate School.

If you are considering to study for PhD or MSc/MRes in any of the topics above or other related topics please do not hesitate to get in touch.