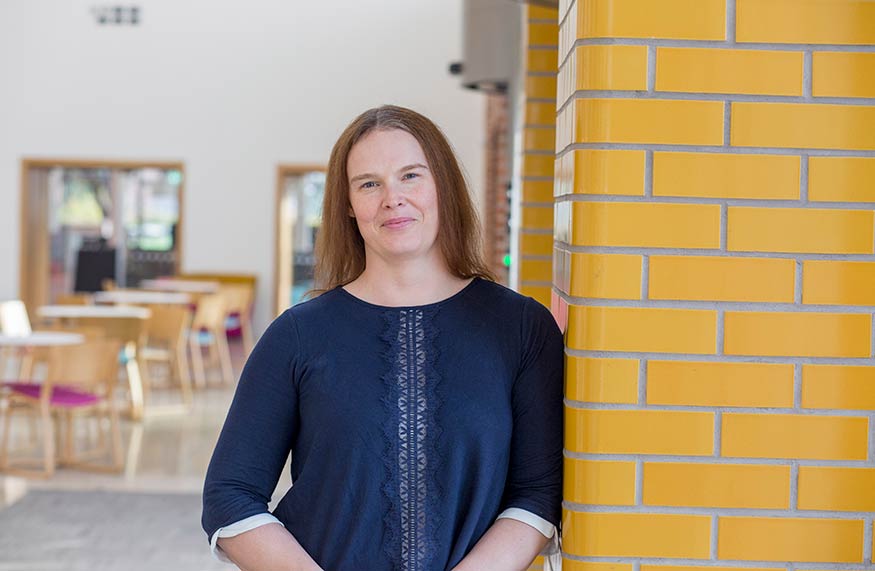 Dr Samantha McLean is a senior lecturer in Microbiology. She is a member of the Antimicrobial Resistance, Omics and Microbiota Research Group and is actively engaged in antimicrobial research. She is course leader for MSc / MRes Molecular Microbiology and MSc / MRes Biotechnology courses and a module leader in both undergraduate and postgraduate Molecular Microbiology modules. Dr McLean is a Masters and undergraduate degree research project supervisor and currently teaches on the following modules:

Dr McLean went on to spend two years at the University of Nottingham as a Research Fellow researching the optimisation of industrial gas fermentation for commercial low-carbon fuel and chemical production through systems and synthetic biology approaches.

In February 2016 Dr McLean took up the position of Lecturer in Microbiology at Nottingham Trent University.

Dr McLean is a member of the Antimicrobial Resistance, Omics & Microbiota research group, situated within the Centre for Health, Ageing and Understanding Disease (CHAUD) Her research interests include investigating the efficacy of novel antimicrobial compounds and the interaction between bacterial pathogens and small molecules of the host innate immune response.

The McLean group is part of the School of Science and Technology, within our rapidly evolving Clifton Campus, a multi-award-winning site including a recently opened interdisciplinary science and technology building, with state of the art bioscience research and teaching labs. We encourage multidisciplinary research and have a diverse and supportive postgraduate community.

The overuse and misuse of antibiotics in health care, agriculture and industry is pushing us towards a post antibiotic era. The rate at which antimicrobial resistance (AMR) is rising is vastly greater than the development of new antibiotics. Resistant strains are increasingly seen within the community where previously they were restricted to the hospital setting. Alongside this, resistance to last line antibiotics such as colistin is now more frequently observed. With yearly death rates attributed to AMR predicated to reach 10 million by 2050 it is vital that novel antimicrobial options are thoroughly explored. Metal compounds offer potential as antimicrobials in numerous applications, including the reducing infection risk in medical devices, dressings and wound management. Our research is focussed, via several projects, upon better understanding the antimicrobial activity of metal compounds, specifically how bacterial pathogens sense and respond to the presence of antimicrobial metals, how they might evolve resistance to them and how metals might be used to reduce the incidence and severity of infection in medical devices.

Silver salts have demonstrated antimicrobial application in numerous research studies. They are widely used in materials from advanced wound dressings to lunch boxes. Yet more research is needed to fully understand the antimicrobial activity of these silver-containing compounds and the possibility of pathogens evolving resistance to them.

My research groups interest in silver involves testing the antimicrobial efficacy of different silver salts using simple antimicrobial testing methods for rapid screening. For more in-depth analysis we use the well-studied Galleria mellonella model to test toxicity of compounds and their ability to rescue the moth larvae from fatal infection with bacterial pathogens. Further cytotoxicity testing is undertaken against mammalian cell lines to understand the interaction of these compounds with human cells.

Alongside antibacterial and toxicity testing, the more promising compounds are used in antimicrobial resistance evolution assays to understand if and how pathogens evolve resistance. Whole genome sequencing is used to identify mutations in the genome that help bacteria to resist silver compounds and transcriptomic studies of pathogens exposed to sub-lethal concentrations of the silver-salts using cutting-edge RNASeq technologies allow us to understand how the bacteria sense and respond to the threat.

Ruthenium compounds also offer potential as a novel antimicrobials. First tested in the 1960’s they showed a high minimum inhibitory concentration compared with other antibiotics that were discovered at the time and as such were not extensively studied. However, since antimicrobial options are becoming increasingly limited ruthenium compounds are being re-visited. Previous research has demonstrated that Gram positive bacteria exposed to ruthenium ion complexes were unable to develop resistance and therefore present a possible treatment option that may be used long-term. Ruthenium (II) complexes have been developed and shown to be highly effective against multi-drug resistant bacterial strains such as methicillin resistant Staphylococcus aureus. Although promising, these compounds still require much study regarding their mechanism of action and long-term efficacy.

Our research group looks to explore the antimicrobial action of novel ruthenium compounds in much the same way as we do for the silver compounds, understanding the mechanisms of action, evolution of resistance by bacterial pathogens and how they sense and respond to the threat.

Microorganisms have two distinct forms of growth, they exist as free-living planktonic cells and also as sessile aggregates protected by a self-producing polymer matrix known as biofilms. The formation of these biofilms is a survival strategy many bacteria adopt in response to environmental stresses such as those encountered within the human body. Biofilms are highly prevalent, the Centers for Disease Control estimates that infections involving biofilms form around 65% of all infections worldwide. These microbial aggregates can cause infection in several ways including via attachment to foreign bodies such as catheters and artificial joints as well as colonization of chronic wounds and the lungs. Biofilms play an immensely important role for human health, as they shelter bacteria from antibiotics and host defence during infection. Microbial populations inside biofilms have been shown to tolerate antibiotics administered at up to one thousand times greater concentrations than is effective against planktonic cells.

Given their pervasiveness and resilience to drugs, patients at risk of biofilm infection are often given prophylactic antibiotics to prevent colonization and where evidence of infection is present treatments are often at high doses and for extended periods of time. This significantly heightens the risk of antibiotic resistance occurring and given the exponential rise in antimicrobial resistance worldwide this presents a clear and present danger to the future efficacy of these drugs. Chronic biofilm infections will be a highly significant contributory factor to the rise of antimicrobial resistance if current treatment regimens persist. This clearly highlights a need for development of new antimicrobials but also of novel approaches to the treatment / prevention of development of biofilm infections due to their innate ability to tolerate classical antibiotic treatments.

My groups research interests here are based around developing ways to reduce / clear biofilm infections on innate surfaces. To do this we are developing models for biofilm growth in Drip Flow Reactors and Modified Robbins Devices to screen the efficacy of new antimicrobial medical device materials such as those coated with the above characterised metal compounds.

Due to an aging population and the increasing prevalence of chronic conditions, the number of people requiring implantable devices is growing. The leading cause of failure of implantable medical devices is infection, which can cause severe complications including reduced device functionality and secondary/systemic infections; both can cause significant trauma for patients. Therefore, development of antimicrobial medical devices that reduce biofilm infection is critical. We incorporate antimicrobial compounds into medical device materials in an effort to develop materials that can be used in medical devices to reduce the incidence and severity of infection.

Working in the McLean group

Opportunities arise to carry out postgraduate research towards an MPhil / PhD in the areas identified above. Further information may be obtained on the NTU Research Degrees website https://www.ntu.ac.uk/research/research-degrees-at-ntu.

We currently have an opening for a highly motivated post-doctoral research associate to join our group for a period of six months to undertake NBIC-funded research aimed at developing a novel in vitro biofilm model to better understand biofilm formation on Vascular Access Grafts and to determine the efficacy of antimicrobial coatings on these grafts. If you are interested in this position please see the advert here or email Samantha McLean directly for informal enquiries. The closing date for application is the 22nd of December 2019.

Research in the McLean group is funded by the Nottingham Trent University PhD studentship scheme and the National Biofilms Innovation Centre: https://biofilms.ac.uk/

See all of Samantha McLean's publications...