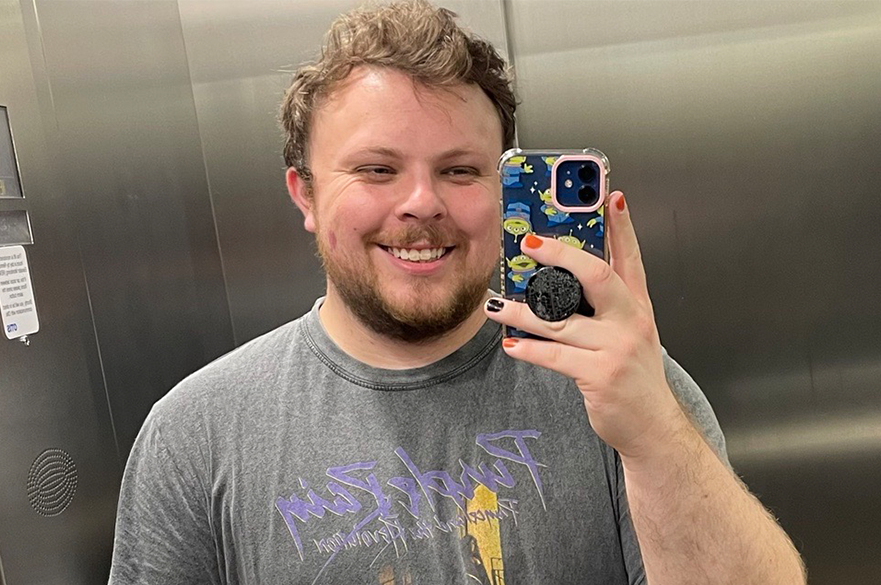 My degree directly influenced my career – without it I wouldn’t be able to work where I do!

Chris Lockyer graduated from NTU in 2018, with an MA in Broadcast Journalism, and is now an Arts and Entertainment Reporter for Sky News. Chris tells us about his passion for his field of work, and how NTU and the student radio station, Fly FM, helped him get to where he is today.

I’d been working at NTSU for a couple of years at that point and decided to take the opportunity to try something I had always wanted to do. I had a background in education and student politics, but I knew deep down I’d always wanted to go into journalism. I spent an afternoon at an open event and chatted to staff and students to see if it’s what I wanted to take on. I knew that the department had a stellar reputation too – something really important to me as I wanted to have good career prospects.

Inside lectures and workshops, I learned everything I possibly needed to know to get into a career in the news. Everything from law, policy and sociology, to editing videos, reading a news bulletin or directing a show. You also got first-hand knowledge from lecturers who had been in the industry for years and knew exactly what they were talking about, as well as from a specialist tech team just for the journalism courses.

Outside, it was all about Fly FM. The student radio station changed my life and I’m not sure I would have landed a job without it. I was given the chance to host and produce radio shows on the station, which had industry level equipment and software where you could hone your craft and style. There was also Trent TV, which did the same but for visual content, which often hosted entertainment and news shows for NTU students.

No such thing! One day I might be working from home working on the online news desk and writing content to go on the Sky News app and website, another I might be gearing up for a film junket with Hollywood megastars at a swish hotel in London. I also might spend a day in an edit suite putting together a news package for the rolling news channel, or I might be sat behind the microphone co-hosting a podcast.

I think you have to love the news and everything about it to work in it – and I do. I just love telling those stories or working on analysis that gives people context and knowledge about something happening in the world. For entertainment news, which is where I specialise – it’s just so fascinating. It’s not all about Hollywood and the top 40 – it’s about media conglomerates taking over the world and social issues in the industry (as well as the odd bit of celeb gossip!). Everyone in the world engages with some sort of entertainment content – which is what makes this work so exciting.

How has your degree influenced your career?

I think my degree directly influenced my career – without it I wouldn’t be able to work where I do!

I don’t really have any – I’m sorry. I have been incredibly privileged to be where I am – I believe I worked hard and spoke to the right people!

Sitting in a room with Tom Holland and Henry Cavill on the same day for various junkets. Both of those interviews were really fun – Holland in particular. The stories got picked up around the industry after I picked up a mini-exclusive with Holland and I ended up making an end of year show on the channel with the year’s best interviews.

One of the biggest challenges has to be COVID – not only was it a big culture shock, but the mental health aspect was brutal. Writing and talking about the thing that you, and billions of people, are going through was draining, as it meant you got no respite from the work life, and vice-versa.

Who knows! I have a young family and I love my job. I’d love to work through the ranks, but I also love writing and producing too. I really don’t know what the future looks like!

Be more daring. My industry is all about taking risks and doing something interesting.

The world continues to change, and the media landscape with it. We’ll guide and support you into the dynamic world of media and journalism.

Stay connected with the NTU alumni and supporter community