Study to bring 600-year-old treasure to the world 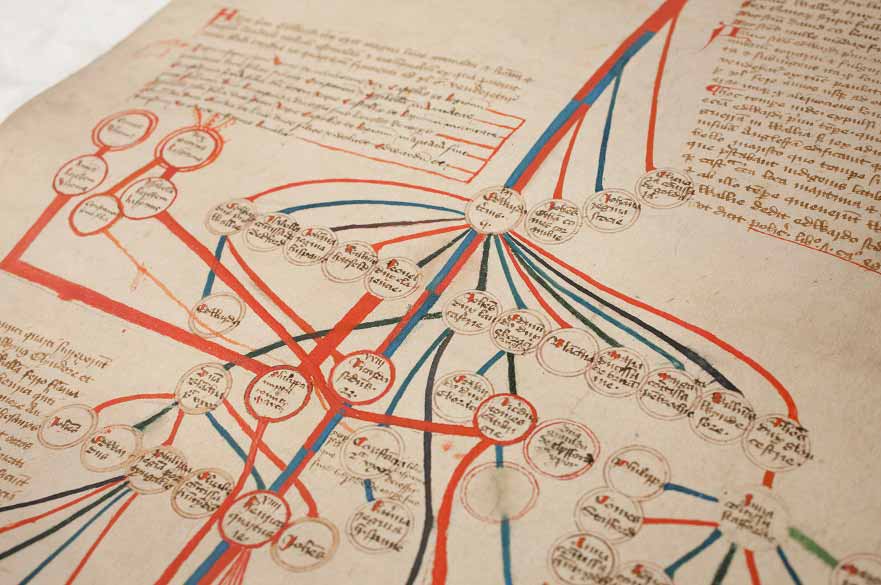 It is part of a project to translate and digitise the 15th Century English illuminated genealogical scroll – which dates to the Wars of the Roses – and make it accessible to the world.

The university is working with researchers at the University of Canterbury (UC) in New Zealand, which acquired the scroll in 1918. It remains the only genealogical roll in the southern hemisphere.

The NTU team is visiting New Zealand to carry out in-depth testing of the Roll to look for ‘hidden’ writing and any other features.

This involves carrying out a series of tests on the Roll with specialised equipment. It is ground-breaking work that has never before been applied to this type of manuscript.

Professor Liang said: “This is the furthest that the NTU Imaging and Sensing for Archaeology, Art history & Conservation (ISAAC) mobile lab has travelled to investigate a historical object. We have brought with us our in-house developed PRISMS spectral imaging system along with various spectrometers to identify the material and reveal any faded or erased writings and drawings.

“This collaboration is the first direct result of the launch of the NTU Global Heritage Research Theme which encourages cross-disciplinary research from the humanities to science & technology.”

Dr Hodgson said: “This is a unique opportunity to explore the hidden history of a medieval document of British origin which ended up overseas, giving it a fascinating joint heritage. The team from NTU will be using a specialised combination of cutting-edge science and historical techniques to help uncover its secrets.

“There are a small handful of similar manuscripts here in the UK that may supply further clues to the origins of the Canterbury Roll. It's real detective work - and thrilling to be part of a team that is making new discoveries every day."

To mark the centenary of its acquisition, the University of Canterbury is releasing a new digital edition and translation of the Canterbury Roll.

The “Canterbury Roll Project” is designed to make the unique scroll more accessible.

University of Canterbury medieval historian, Dr Chris Jones, said: “Once owned by the original Nurse Maude, Sybilla Maude, the Canterbury Roll is the most significant and substantial medieval artefact in New Zealand. For 100 years, UC has been the guardian of this unique 600-year-old treasure, which tells the history of England from its mythical origins to the late Middle Ages.

“No-one has anything like this in New Zealand or Australia. And it’s utterly bonkers that no-one really knows we have it, because it’s magnificent!”

“Using cutting edge technology that allows users to interact directly with the manuscript, UC is making the Roll available to the world accompanied by a brand new English translation.

“It’s visually striking. The Wars of the Roses are what ‘Games of Thrones’ is based on, and this is the Wars of the Roses laid out across a 5-metre, visually spectacular document. It is not the only manuscript roll from this period to exist in the world, but, uniquely, it features contributions from both the key players in the Wars of the Roses – it was originally drawn up by the Lancastrian side in the conflict but it fell into Yorkist hands and they re-wrote part of it.”

Canterbury College professors bought the Roll as part of an effort to help foster a sense of British identity in the closing days of WWI, according to the historian.

Dr Jones added: “People have released ‘digital’ rolls in the UK and the US but they tend to be static photos. This is a fully ‘scrolling’, online and zoomable text. It’s considerably more sophisticated than anything that exists in the world today.”

Professor Liang is based in NTU’s School of Science and Technology, whilst Dr Hodgson is part of the School of Arts and Humanities.

Study to bring 600-year-old treasure to the world