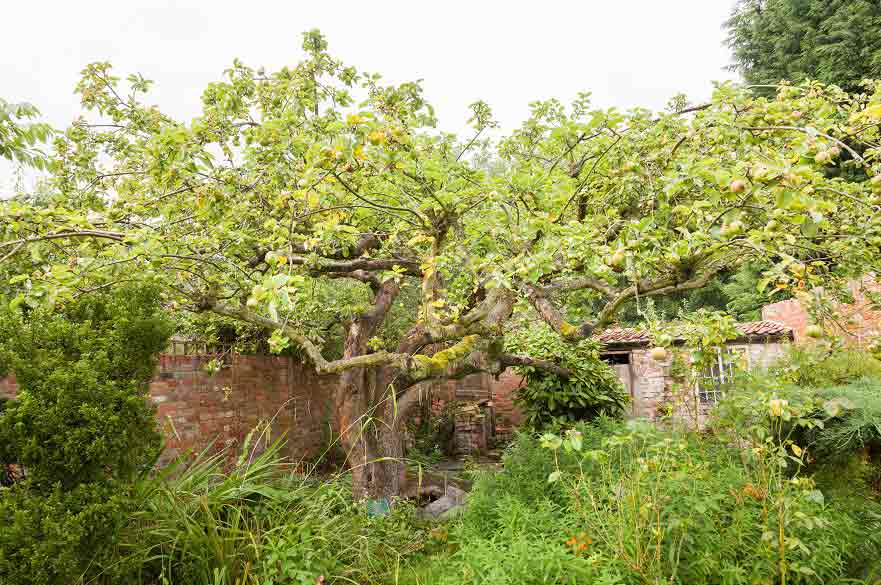 The tree was grown from a pip more than 200 years ago by Mary Ann Brailsford in the Nottinghamshire town of Southwell, a short distance from the university’s Brackenhurst Campus.

The university wants to try to prolong the life of the tree – which is dying as a result of an incurable honey fungus infection – and to safeguard its important heritage for generations to come.

“We are delighted with this news and now intend to set about trying to preserve this iconic tree for as long as possible,” said Professor Robert Mortimer, the Dean of the university’s School of Animal, Rural and Environmental Sciences.

Horticulture staff and students will carry out an initial assessment of the tree and then set about carefully tending it with the aim of prolonging its life.

Grafts of the original tree will also be replanted at the Brackenhurst Campus.

As part of the project, the university has purchased two cottages on Church Street from previous owner Coulson Howard – which will be refurbished and used for postgraduate student accommodation – as well as the rose garden containing the tree.

It hopes to open up the rose garden to members of the public, as well as develop plans to formally celebrate the history and heritage of the Bramley, which is the UK’s most popular cooking apple.

Mary Ann Brailsford planted the pip between 1809-1815. More than 40 years later new occupier Matthew Bramley allowed local gardener Henry Merryweather to take cuttings from the tree to grow in his family’s nursery – provided they had the name ‘Bramley’s Seedling’.

The first recorded sale of a Bramley was on October 31, 1862, when Mr Merryweather sold three Bramley apples for two shillings.

In 1900 the tree blew down in a storm but managed to survive.

Today there are more than 300 Bramley growers in England, with about 83,000 tonnes of the apples grown annually in the UK alone. The apples are very large and typically used in desserts.

Professor Mortimer added: “He said: “We want to play our part in recognising the importance of the Bramley’s Seedling, the nation’s favourite cooking apple, and celebrate its huge cultural significance for Southwell, the UK and globally.

“The original tree is one of the most significant and well-known. Unfortunately it will inevitably perish due to disease, but we want to try to preserve this great tree for the people of Southwell for as long as possible.”

The annual Bramley Festival, which celebrates the origins of the Bramley Apple in Southwell, is now in its 25th year and will be held on Saturday October 20, with celebrations in Southwell Minster and throughout the town.