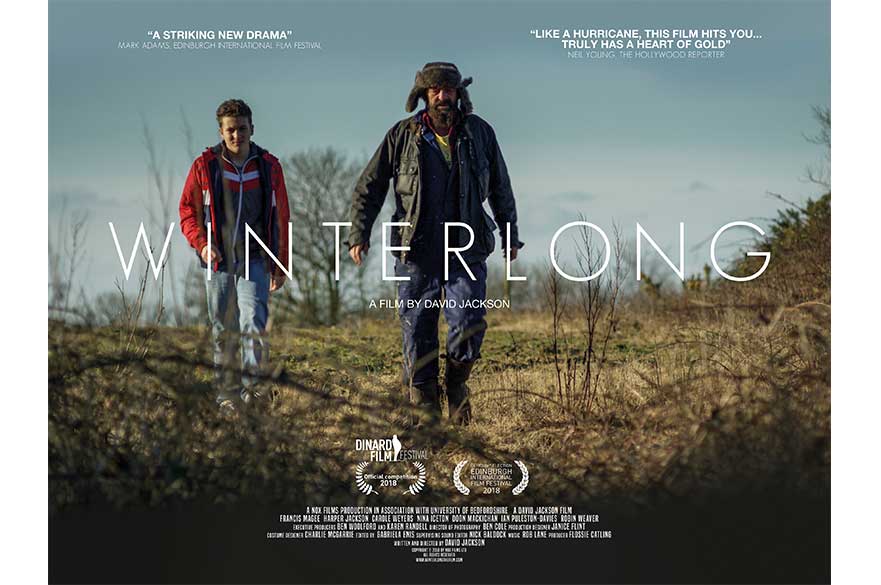 A Senior Lecturer on our BA (Hons) Filmmaking course is having his debut feature film screened at Broadway cinema in Nottingham later this month. David Jackson, an award-winning writer, director and filmmaking academic, has written and directed Winterlong, which tells the story of a poacher living on the margins who is forced to change his feral ways when his estranged teenage son turns up unexpectedly on his doorstep.

It is the tale of Francis and his teenage son Julian, who is left at the doorstep of his remote caravan home by his estranged wife. Solitary though charming, Francis must amend his ways, take on new responsibilities and engage with the world. But just as the two begin to bond, Julian takes a friend into the woods where an accident occurs that puts them under the authorities’ spotlight. They must then make a decision that will forever change their lives.

The film was recently nominated for the Michael Powell Award for Best British Feature Film at the Edinburgh International Film Festival, marking its moving and powerful message and production prowess. We caught up with David, who told us about how his experience as a practising filmmaker benefits NTU’s BA (Hons) Filmmaking students: “My students gained first-hand experience of working on this feature film. They learned all about collaboration and professionalism and the risks you have to take to make something with ambition for the cinema.”

He continued: “By working with me they could see that I’m not someone who just ‘talks’ about making films but someone who can be seen actively ‘doing’ as well. Making Winterlong has been one of the most arduous and joyous experiences of my creative life and I’m immensely proud of what we’ve achieved together.”

See Winterlong, in addition to a Q&A with David, at Broadway on Wednesday 27 March 2019.