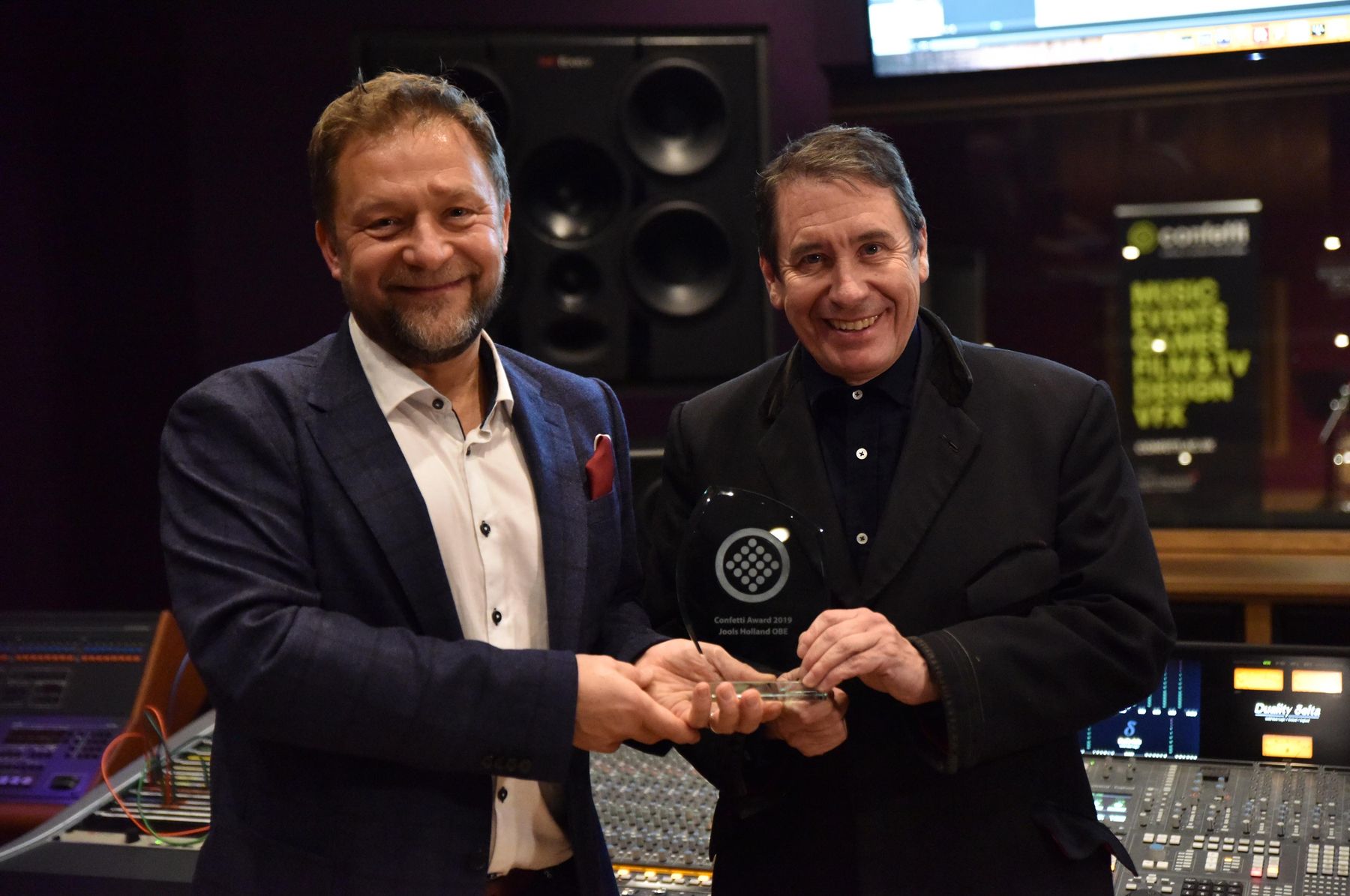 To commemorate 25 years of discovering and training new talent, Confetti unveiled a new prize, ‘The Confetti Award’, honouring unique individuals who have made an extraordinary and sustained contribution to raising the visibility of new creative talent. Founder and CEO of Confetti Craig Chettle announced the first recipient of this award was Jools Holland OBE and presented it to him during a tour of the music recording studios and facilities in Metronome.

Addressing the guests in the packed auditorium Jools Holland said:

“I am honestly amazed at the mind bogglingly brilliant facilities you have here. The studios I have seen are better than any I have seen anywhere.  And the students I met were so engaged because they love what they do. They have such great opportunities. I haven’t seen anything like this before and I am sure this place will soon be on the global map”.

Performing at the event were former student and international beatboxer THe PETEBOX, the Confetti House Band – comprising current Confetti students Grace Baker, Holly Taylor Gamble and former student Matt Burrows - and guests were treated to an impromptu rendition of “Happy Birthday” from Jools Holland himself.

Alongside the exciting guest list, the event also saw the unveiling of “25 Frames” - a permanent 25-screen digital exhibition space within Metronome. On the night, it displayed student award-winners, the history of Confetti alongside significant cultural moments from around the world from the past 25 years.

Founder and Chief Executive Craig Chettle describes why the event was important:

“It was an honour to stand up in front of hundreds of friends to talk about the impact Confetti has had over the past 25 years. From humble beginnings, we are now a leading provider of specialist education with a student body of over 2000. Our graduates are behind the scenes of Star Wars – the Rise of Skywalker and big games such as Grand Theft Auto. They are performing at venues all over the world and they start that journey with us. We ensure real-world industry experiences are always on offer as well as academic study. Our “Do it for Real” ethos underpins all activity.

Creating authentic experiences and opportunities for our students has always been at the centre of everything we do. Whether that is crewing music festivals, making programmes for Notts TV or performing in our venue. We have always strived to ensure our students learn about the industry by being in it – being a part of it – and it was fantastic to see Jools Holland as well as our friends Shane Meadows and Vicky McClure here tonight to share in our company milestone. At Confetti, we want every young person who is wondering how they can get started in the creative industries to know that they can find the answer to that question with us.”

In 2015, Confetti became part of Nottingham Trent University – one of the UK’s most successful modern universities. Since that point, there has been over £15m of development on the Confetti campus, in Nottingham’s Creative Quarter.

Confetti is also at the heart of a vibrant ecosystem of independent creative businesses – operating under the banner of the Confetti Media Group, all supported by peerless facilities. CMG businesses include Spool Films – responsible for audio post-production on award-winning productions This Is England and Dead Man’s Shoes as well as Shane Meadows’ acclaimed drama for Channel 4, The Virtues.

CMG also runs Notts TV in partnership with Nottingham Trent University, now celebrating its fifth year broadcasting to homes across the county. Notts TV has proven to be a vital training ground for TV and Film Students with more than 50 graduates now working for major broadcasters including Sky, the BBC and ITV.