The alumni will both receive £10,000 and mentorship with an industry professional to help them launch their careers. 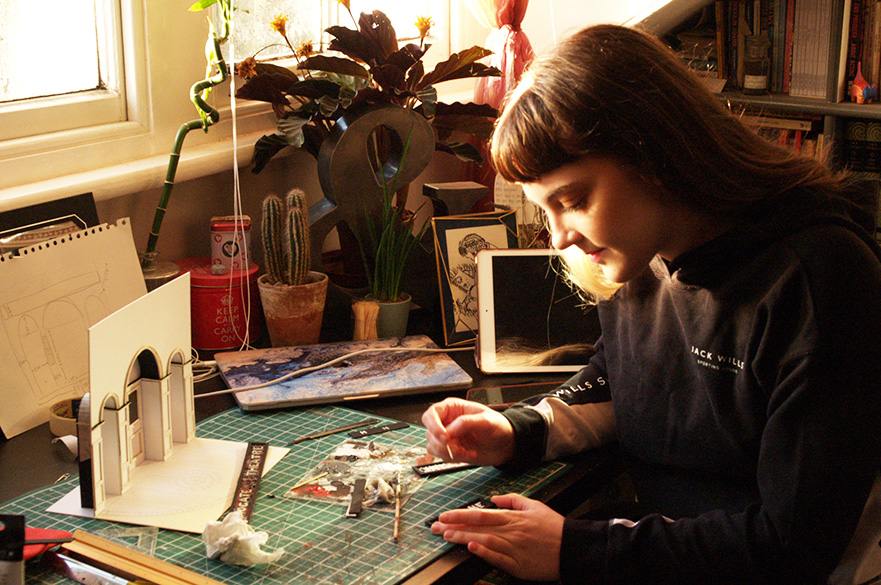 Caitlin Mawhinney and Nikki Charlesworth picked up the award, presented by theatre designer Morgan Large at the ceremony this March.

The Evening Standard Future Theatre Fund, in association with TikTok and in partnership with the National Youth Theatre is an £120,000 fund which was set up to mitigate the impact of the COVID-19 pandemic on the theatre industry, which has suffered significantly as a result of theatres closing.

The submissions were judged by a panel chaired by Paul Roseby, Artistic Director and CEO of the National Youth Theatre. The panel also included representatives from TikTok, the Young Vic, the Royal Court Theatre, Bush Theatre, Theatre Royal Stratford East and performers such as Giles Terera and Helen McCrory.

Caitlin Mawhinney graduated from Nottingham Trent University (NTU) in 2019 and is now a freelance designer, activist and workshop artist. In her TikTok submission for the award, she built a model of her parent’s greenhouse in Knaresborough from scratch. ‘My model-making is more on the realistic side, but my theatre design work is more free and abstract.’

Caitlin told us how excited she was to win: “I was so thrilled just to be nominated that I didn’t even consider I might in. They tricked me into going on a zoom with a designer who I really admire, than I was really flustered and shocked when they announced I had won the funding against some other amazing designers. It makes so much difference at a time like his, when it feels like the whole industry is on hold. So, having this support and an industry mentor is going to be amazing to help me pull though this time and pave a way for myself. I want to show that theatre isn't just London centric, that it is alive and thriving across the country.”

Nikki Charlesworth graduated in 2017 and is a puppeteer and designer. Whilst at NTU, she was able to integrate her autobiographical experience into her work, designing a puppet that reflected her own mobility, which is impaired by cerebral palsy. She’s currently working on a film called ‘What Happened to You?’ on the same topic.

Helen Davies, Senior Lecturer and course leader for BA (Hons) Design for Stage and Screen (Design for Theatre and Live Performance) commented on the success of the graduates: ‘We are really proud of both our graduates receiving these prestigious awards, not only in this difficult and unprecedented time, but because both have shown passion and commitment to the Industry and its Future, proving their unique voices are heard and will pioneer new forms of practice’.