MEng (Hons) Civil Engineering Design and Construction students recently took part in a live project brief as part of their Major Design & Construction Project, which was to propose a new route for the Nottingham tram network. 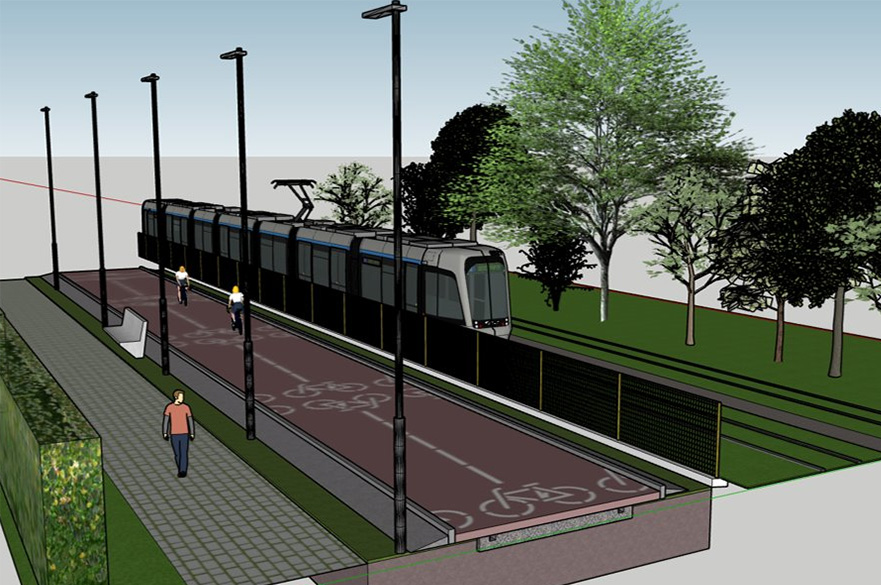 Nottingham City Council approached Nottingham Trent University to propose a new tramline or extension to the existing tramline, to complement the existing network and to promote Nottingham as a city that is forward thinking in terms of its public transport provision.

Students were asked to consider local and national transport policies, any significant structural challenges and private sector operations – as well as how to minimise disruption to existing transport networks during construction.

During the first phase of the project, NTU students collaborated with students from the Special School of Public Works, Building and Industry in Paris to create optioneering presentations.

Taking into consideration feedback from Nottingham City Council and Tramlink, students groups presented their final designs, justifying their choice of route and providing a compelling case for why their route should be chosen.

Industry guests from Nottingham City Council and Tramlink were extremely impressed with the standard of work produced, and the winning group comprised of Harry Bladen, Mollie Dowsing, Tom Craswell and Ayesha Ganger, all of whom received £25 Amazon gift vouchers.

Andrew Conroy from Nottingham Tramlink, said: ‘I was really pleased to see the level of thought and the quality that had gone into the final presentations of the tram route options.  The three teams had done an incredible amount of work and it has certainly made me pause for thought about the next stages of potential tram development.’

David Russhard, Course Leader BEng (Hons) / MEng Civil Engineering, said: ‘The project has been very well received by all as a great example of students and universities collaborating across borders in difficult times.  All of the students found it to be a very enriching experience.’

Andrew Holdstock, Nottingham City Council, said: 'This is the second year in which we’ve been asked to assist the MEng Civil Engineering students in their project work and, once again, I’ve been immensely impressed with the professional way in which they’ve approached the task of identifying a new tram extension, and with the very high standard of work that they’ve produced, from their initial optioneering of route choices, to their final presentations. The students demonstrated that they were able to work in teams to produce results that will be valuable to the City Council and its partners in developing plans for an extended tram network, and will, I’m sure, be of benefit to the students in their future careers. We look forward to continuing our relationship with the University in future years.'

Mollie Dowsing, Civil Engineering student, said: “The Tramlink proposal coursework was an exciting project for us, as it allowed us to apply the previous four and a half years of knowledge and experience into a very important piece of work for our final year. The insight and help gained from the sessions held with Tramlink were invaluable, every week they took time from their busy schedule to answer all of our questions. As a year group we would like to thank the lecturers and guests involved for their indispensable input and time, and hope that this project and relationship continues for many years to come.”

The school is delighted that students continue to benefit from participating in live projects, especially when their work feeds in to supporting the local community in Nottingham.