Bonington Gallery is delighted to announce a forthcoming solo exhibition by sculptor, jeweller and performance artist Andrew Logan (b. 1945), spanning 50 years of practice. 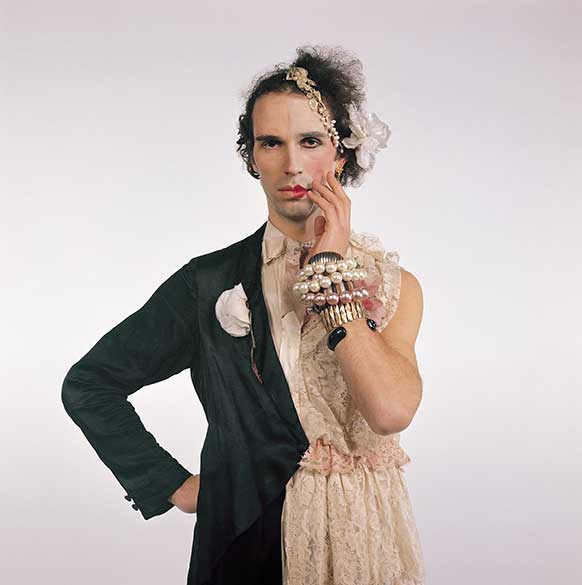 The Joy of Sculpture will provide a survey of Logan’s artistic output, featuring large scale sculptures, mirrored portraits, jewellery, and archive displays from his infamous Alternative Miss World competitions – the first time he has displayed works from all areas across his career.

Key works within the exhibition will include Goldfield, first commissioned by the Whitechapel Gallery in 1976 – transforming half the gallery into a giant wheat field. Along the walls will be a number of Mirror Portraits, based upon Andrew’s family and friends including other visionaries such as Derek Jarman, Scarlett Cannon and Duggie Fields. There will be a new artwork, a 4-metre-high mirror portrait of Fields, displayed for the first time to the public.

The Arum Lily (1970) sculpture will also be on display, through which Andrew has selected a daily record to play at 12:30pm each day throughout the exhibition.

The Bonington Vitrines, situated just outside the main gallery, will house archive materials from Logan’s celebrated Alternative Miss World competition. The infamous pageant, inspired by the Crufts dog show, started in 1972 and hosted by Logan who acts as both Host and Hostess. Contestants and judges over the years have included David Hockney, Ruby Wax, Leigh Bowery, Grayson Perry and Zandra Rhodes.

A look at Andrew Logan's exhibition

Curator Joshua Lockwood-Moran comments on the exhibition: “To bring Andrew’s artwork to Bonington Gallery is really exciting, the gallery is situated in the middle of the School of Art and Design and is a perfect context to exhibit Andrew’s practice. The exhibition takes a holistic look at Andrew’s work, and spans 50 years of making. I feel it is important to be highlighting Andrew’s career to both new and existing audiences, examining Andrew’s contribution to alternative culture. The work encapsulates Andrew’s positivity and energy and I hope it brings a lot of joy to everyone who visits.”

Logan first and foremost describes himself as a sculptor, a term that encapsulates all approaches within his practice. He challenges convention, mixes media, and plays with our artistic values.

Logan’s work is difficult to locate, it defies ‘isms’, transcends traditional boundaries of discipline and establishes its own unique position. Logan’s artwork embodies his unrelenting (and infectious) passion, joy and energy. Smashed glass and found objects are transformed through the artists hands, metamorphosing into flamboyant, colourful and glittering objects, in all shapes and sizes.

At first glance objects may look haphazardly constructed and ephemeral, but Logan is methodical in his approach – informed by his time studying architecture and subsequent years prolifically honing his skills. Through his rigorous approach he has created large scale sculptures such as his Cosmic Egg (1983)and giant musical flowers such as Aram Lily (1970), as well as smaller works incorporating trinkets from his travels and mirrored portraits immortalising his idols and friends.

Accompanying the exhibition will be an ambitious programme of public events, as well as a commissioned essay by curator, writer and acquaintance of Logan’s, Lynda Morris.

For more information on this event, visit https://www.ntu.ac.uk/about-us/events/events/2021/09/andrew-logan-the-joy-of-sculpture