PhD student in Ecology and Conservation Lauren Moore leads on successful workshop, helping members of the community to understand the science behind the art. 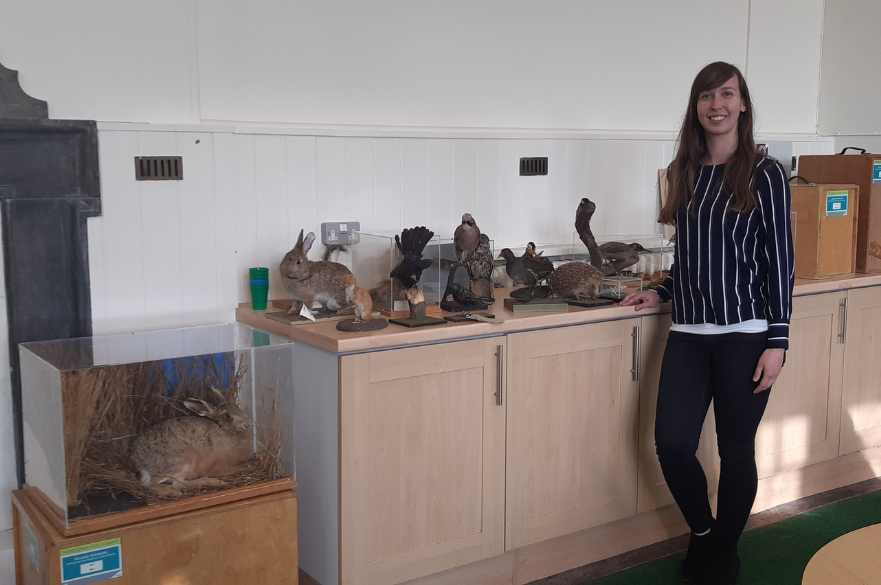 Lauren Moore and her many species at the Grantham workshop

The Grantham Art Prize is a national competition for 12-25 year olds to design murals that send a strong message about the habitats and living organisms under threat across the UK, and to address the importance of biodiversity. The event was organised by Grantham Institute at Imperial College London with Octopus Energy and UK Youth for Nature. The aim of the event was to address the current biodiversity and climate crisis by encouraging people to act now and to change the fate of the environment. The event was open to the public in 2021 to allow young people to share their ideas.

Lauren’s role involved providing information on the ‘science behind the art’. The workshops took place at the Natural History Museum at Wollaton Hall and included topics such as diversity, why it’s important to the environment and humans, and why we’re seeing the catastrophic declines in biodiversity around the world.

Lauren told us “I felt it was important to maintain positivity throughout and recalled conservation success stories and the power of the public when people come together to fight for environmental protection. I used examples and case studies from Nottinghamshire, such as beaver (Castor fiber) and Nottinghamshire Catchfly (Silene nutans) reintroductions, to inspire the young people about nature on our doorstep and to encourage a Nottinghamshire-based mural design. We ran these workshops several times over the course of two weeks to different age groups and worked with them to create their mural designs. In the same workshops, a local street artist was there to provide tips and techniques on how to create powerful art that can convey an important message.”

Lauren went on to tell us how her project relates to the workshops she ran. “My project is centred on the impact that humans are having on wildlife via infrastructure, the decline of the hedgehog in Nottinghamshire and potential mitigation solutions. Therefore, I was able to draw on my research to give an overview of human impact, using hedgehogs as a key case study, and provide insight about the contemporary conservation actions taken to reverse the biodiversity crisis in Nottinghamshire and the UK.”

“It was brilliant to meet a range of young people who were so interested and engaged in nature. They all had their own reasons for being passionate about protecting the environment and it was wonderful to encourage that further. I particularly enjoyed learning about the power of art to convey environmental messages, doing so with few words but that will leave a long-lasting legacy."

The murals were painted in different locations across the UK, which includes Nottingham.

Following this event, Lauren has been asked to participate in the Natural History Museum’s ‘Extinction Events Then and Now Biodiversity in Danger’ event. This will involve talking about the current biodiversity crisis and her Ph.D. work to professionals and the public. “It was a privilege to be part of a larger initiative to raise awareness about climate change and biodiversity loss, and which will continue to educate and inspire for years to come. It was great to have been involved with interdisciplinary collaboration and seen how different people’s skills and knowledge can come together for a common goal.”