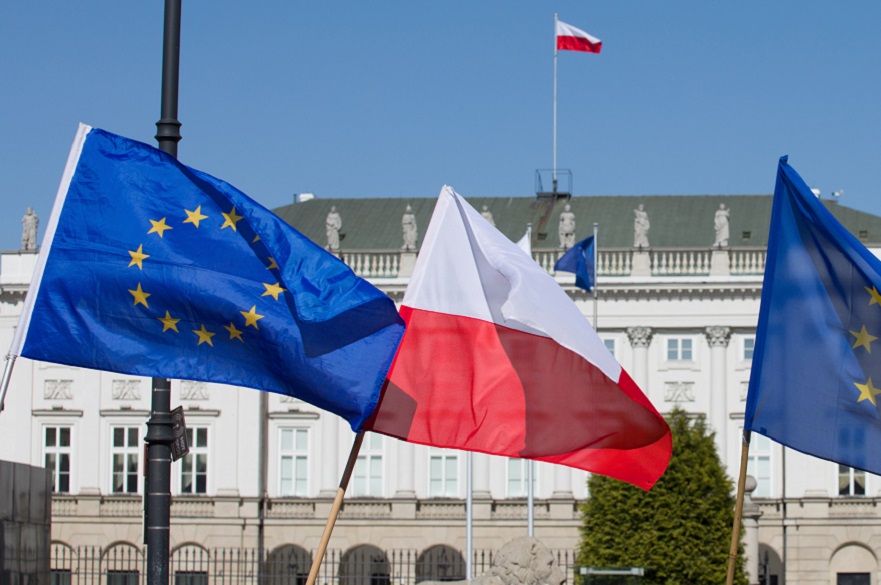 The EU and Polish flags

The Russian aggression against Ukraine revealed once again some serious differences between the "old" and "new" EU states. The former seemed much more surprised than the latter. From the point of view of countries like Poland, the danger has been obvious for a long time, while their warnings against Putin have been flowing to the west for years. However, these voices have not been treated seriously in the Western European capitals. Now few people have enough courage to admit it in the way Georgette Mosbacher, the former US ambassador to Warsaw, did in her interview for one of the Polish internet portals. She stated directly that the representatives of the Polish political elite showed greater foresight than their Western European colleagues.

Of course, the sensitivity to the threat from the east comes from the geographical proximity of Russia. However, the problem is more complex. It is related to the historical experiences, shared by Poles and other nations of Central and Eastern Europe, which had a significant impact on the identity of local political elites. This impact is explained in the work of many scholars and writers, such as Milan Kundera, and Istvan Bibo. Their texts were written a long time ago but did not lose their accuracy. On the contrary, they are even more relevant today for at least two reasons. Since 2004, this organization is partly made up of countries shaped by different historical processes than its Western members. And peace in Europe is threatened to an unprecedented degree since the Second World War. It is therefore worthwhile to reread the thoughts of these authors in a new geopolitical context of Russian aggression in order to draw some conclusions about the future of the EU.

Istvan Bibo, a Hungarian political theorist, deals in his writings with the problem of an imprint left by history in countries from the Baltic to the Black Sea. In his opinion, they constitute a political entity separate from the West, though also from the East. He asserts the prevailing people’s mentality in Central Europe is based on the feeling of the constant threat, resulting from a difficult history - the domination of great empires over smaller nations for centuries. According to Bibo, the societies of Central Europe are obsessed with a sense of injustice accompanied by an existential fear of an uncertain future, in which the very existence of the nation may be endangered one day. The basic problem they have to cope with is the lack of continuity of their states, manifested by constant border changes, and even the disappearance of entire countries from the map.

Another writer, Milan Kundera, wrote in the same pattern many years ago: “A small nation is one whose existence can be questioned at any moment, that can disappear and knows it. The French, Russians, or English do not ask themselves if their nation will survive. Their anthems speak of greatness and eternity. On the other hand, the Polish anthem begins with the words: << Poland Is Not Yet Lost>>". Therefore, the nations of Central Europe are not "victors" of history, but "victims and outsiders". These frustrations do not create favorable foundations for the development of democracy - in an atmosphere of constant threat, the problem of a political system is relegated to the second plan in favor of the concerns for independence, considered a superior value.

These problems left an unquestionable mark on the way political elites of the Baltic states or the Visegrad Group see the world. Certainly, the building of a democratic society based on Western European patterns is not sometimes easy in countries like Poland for the reasons explained above. Besides, certain processes there are slower or different than in the West. The awareness of this fact is supposed to help us to better understand many problems affecting their social or political life. This unquestionable mark left by the tragic past is also translated into specific historical sensitivity and deep, critical knowledge of contemporary Russia and its neo-imperial projects.

Whereas the elites of the "old" EU lacked this knowledge, and until recently many Western politicians perceived Putin as a modern statesman who was thinking in a way they did. The tragedy we are currently witnessing prompts us therefore to draw some conclusions for the future. Poland and other countries of the region (except for pro-Russian Hungary) should certainly have more say in the process of shaping the EU's security policy. They bring unique historical expertise, which allows them to better assess the threat from the East.

But there is more to it. We should seriously reconsider the way the atmosphere in the conflict-torn EU might be improved. In the future, relations between member states must better reflect their cultural and historical distinctiveness. That means we have to pay more attention to their geopolitical location, difficult history, and problems caused by processes of globalization affecting them (e.g. migrations from the East to the West) while bearing in mind that local societies are not as open and multicultural as we are used to in the West. On the other hand, Warsaw has to understand in the long run that participation in the EU does not mean a unilateral transfer of funds, but also a commitment to adhere to certain standards.

Briefly, we need more dialogue, which is difficult in times of deep political divides. However, this is the only way to strengthen the internal cohesion of the EU, which is, after all, a natural barrier against Russian imperialism. This, in turn, should enable this organization to play in a long run a more significant role on a global scale in promoting values such as democracy and human rights.