Beavers have been born in Nottinghamshire for the first time in at least 400 years as part of a project involving Nottingham Trent University researchers. 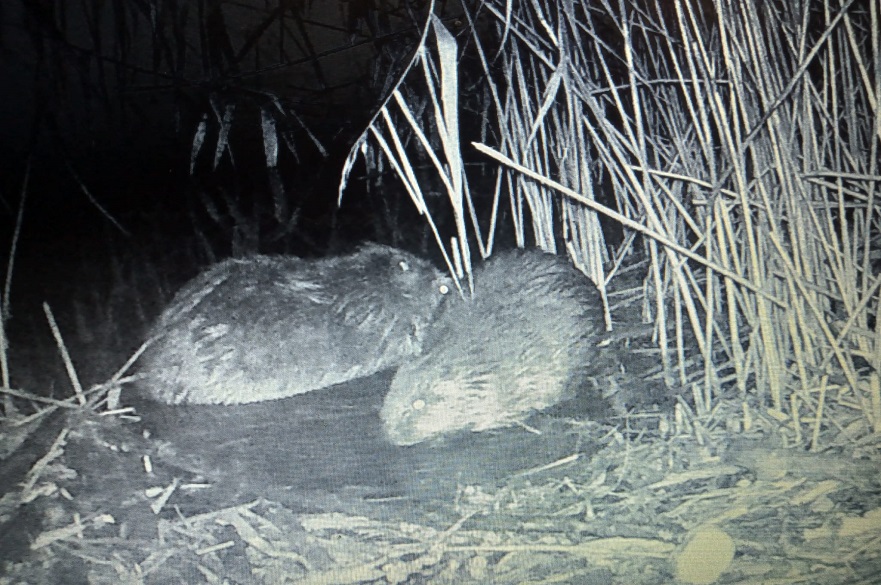 Just over a year ago, staff, volunteers and supporters of Nottinghamshire Wildlife Trust were eagerly awaiting the arrival of eight beavers from Scotland to release at the Idle Valley Nature Reserve near Retford.

The anticipated arrival was part of an ambitious project to return them to the county for the first time in centuries.

A year on, those connected with the project are reflecting on the animals’ positive impact on the reserve, the largest site in the charity’s care, and celebrating the news that the group has expanded more quickly than expected – with two previously single adult beavers having successfully paired and raised kits.

The group, which lives in a carefully designed enclosure, settled in well and their positive impact within the 58-hectare enclosure was evident within days – from signs of coppicing by feeding on willows to evidence of gnawing on large tree trunks to trim their teeth, creating new habitat for invertebrates.

Researchers and practitioners in species recovery in NTU’s School of Animal, Rural and Environmental Sciences are providing expertise to help underpin the project.

This initially involved conducting pre-release surveys of food and existing species at the release site and providing advice to ensure the release followed the IUCN conservation reintroduction guidelines.

Whilst the prospect of returning beavers to the Nottinghamshire landscape – where they previously thrived until hunted to extinction many centuries ago – provided motivation for the project, the real driver was the beavers’ capacity to enhance habitats not just for themselves, but also for other species.

Their return represents the Trust’s commitment to utilising natural processes to enhance the wildlife habitats at the huge reserve, which sits alongside the River Idle, to make it wilder and more resilient to the impacts of climate change.

A comprehensive monitoring programme in partnership with NTU will assess the longer-term impact of the beavers as they enhance habitats to the benefit of other species, such as wildfowl, amphibians and dragonflies. The research will also identify opportunities to improve habitats further for vulnerable species such as otter, water vole and bittern.

Dr Samantha Bremner-Harrison, Associate Professor in Species Recovery and Species Recovery Unit Lead at Nottingham Trent University, said: “Production of kits so soon after the release by the recently-paired beavers is really good news, as this indicates the high quality of the habitat and the abundance of resources for the beavers.

“An increase in the number of beavers through production of kits is part of the long-term population planning for the site and will help to achieve the overall project goal of restoration of the site. NTU PhD and Masters students will be tracking the activity of the beavers, including the new kits, to document their movements around the site and impact on the habitat over time.”

With over 375 hectares of diverse habitat to manage across the vast site, the Wildlife Trust has long been searching for the right balance between direct intervention by man and machines and natural processes. The Trust’s Nature Recovery Team firmly believed that beavers would make a significant impact through their feeding and by felling trees to build their underwater lodges – thereby helping control willow and other tree species currently forming dense scrub at the expense of reedbed and marshland habitats.

Speaking on behalf of Nottinghamshire Wildlife Trust, Head of Nature Recovery (North) Janice Bradley, said: “Idle Valley Nature Reserve is by far the largest site in our care and the scale of the challenge has sometimes stretched our resources. Shaping habitats across such a large area through staff and volunteers with hand tools and machinery is a never-ending task, so we have increasingly employed natural processes such as grazing to keep habitats open and diverse.

“The return of beavers, alongside investment to enable us to control water levels and expand our conservation grazing programme, was the obvious next step and we’re delighted with the impact they have had so far. The discovery by our monitoring team that we have new kits earlier than expected is a great way to round off the year.”

The Wildlife Trust hoped that the single adults, which had never previously met, might pair last spring and potentially rear kits in 2023. The fact that they had kits this summer means they got together very quickly indeed. The team behind the project is delighted to have two family groups helping to transform habitats at the Idle Valley Nature Reserve.

In some parts of the enclosure the beavers have ‘ring-barked’ some trees, which the Trust hopes will develop into standing deadwood, one of the rarest habitats on the reserve and which is essential for declining species such as lesser spotted woodpecker, willow tit and tree-dwelling bats. In recent weeks, the beavers have created a new glade in an old aspen plantation, which will enable the development of a far richer ground flora and have also coppiced willows in channels in the reedbed, opening up those channels for wildfowl and bittern.

The return of the beavers required significant investment, including fencing the new enclosure, research to ensure the beavers would thrive and to assess their future impact plus licencing and logistics of the quarantine and transportation from Scotland. This investment would not have been possible without partners and supporters.

Janice added: “Bringing back beavers to Nottinghamshire is the most ambitious species-focussed project we’ve ever embarked on and we couldn’t have achieved it without the support of Severn Trent, Nottingham Trent University, partners such as Natural England, the EA and the Beaver Trust, and of course generous individual donors.”

The reintroduction of the beavers formed part of a much larger project designed to improve a range of habitats across more than 220 hectares of the reserve, funded by Severn Trent. Severn Trent and the Trust were recently nominated for the Utility Week Collaboration Award for this wetland transformation project.

Speaking on behalf of Severn Trent Graham Osborn, Biodiversity and Ecology Team Lead said: “This has been one of the most exciting and nail-biting projects that we have had the pleasure to support, simply because we are dealing with nature and a species that is relatively unfamiliar in our region, and with that comes risk on potential success. But to have such an incredible first year, with the beavers becoming established, and then the new additions to the group, this is an outstanding result for everyone involved.”

The beavers were originally living on the River Tay in Scotland and after a period of quarantine at specialised facilities at Five Sisters Zoo, the Beaver Trust carefully transported them to their new home in Nottinghamshire. The Wildlife Trust has introduced beavers to the site as part of a long-term vision to make the site wilder by enhancing, protecting and connecting habitats and as part of wider, multi-partner efforts to ensure 30% of land across the UK can support nature’s recovery by 2030.

The Wildlife Trust believes that the Idle Valley Nature Reserve can be a vital part of the UK Nature Recovery Network by acting as a catalyst for the restoration of nature across the wider Idle floodplain where it has been investing in and supporting other landowners for over 30 years.