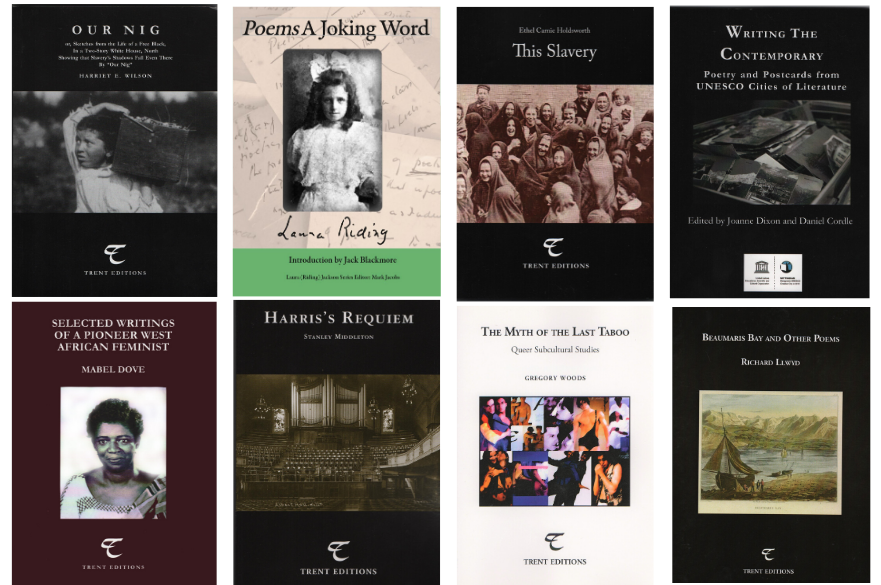 We are currently unable to fulfil orders for physical copies of Trent Editions books. Kindles and free eBooks are available for some texts. See below for more details.

Apologies for any inconvenience caused.

The publishing arm of Nottingham Trent University, Trent Editions was founded in 1998. For the past 20 years we have sought to enrich the literary landscape by making innovative, radical and culturally significant works accessible to new audiences in handsome print editions.

We recover texts from neglected writers, including the first novel by an African-American woman, Harriett Wilson’s Our Nig. We have worked with poetry and prose works by working-class writers like John Clare, Ethel Carnie Holdsworth. In addition, postcolonial texts by authors such as Alex La Guma and Cornelia Sorabji - all presented with critical introductions by leading scholars in the field.

Our specialist interests include, but are in no way restricted to:

We accept book proposals all year round. If you would like to submit a proposal please fill out this form and email your completed proposal to trenteditions@ntu.ac.uk

We have several existing and emerging specialist interests:

Radical Fictions: Recovering radical novels and innovative fiction, with an emphasis on writers of the British Isles

Poetry Recoveries: Reconnecting poets to their own time and ours

Radical Recoveries: Key texts in the history and development of working-class, radical and popular print culture

Trent Essays: Writers on the Craft of Writing

All our printed publications can be viewed or purchased online including pricing, a description of each publication and it's respective author.

Our free eBooks are available through the NTU Online Store.

Our Amazon Kindles can be purchased through the following links: