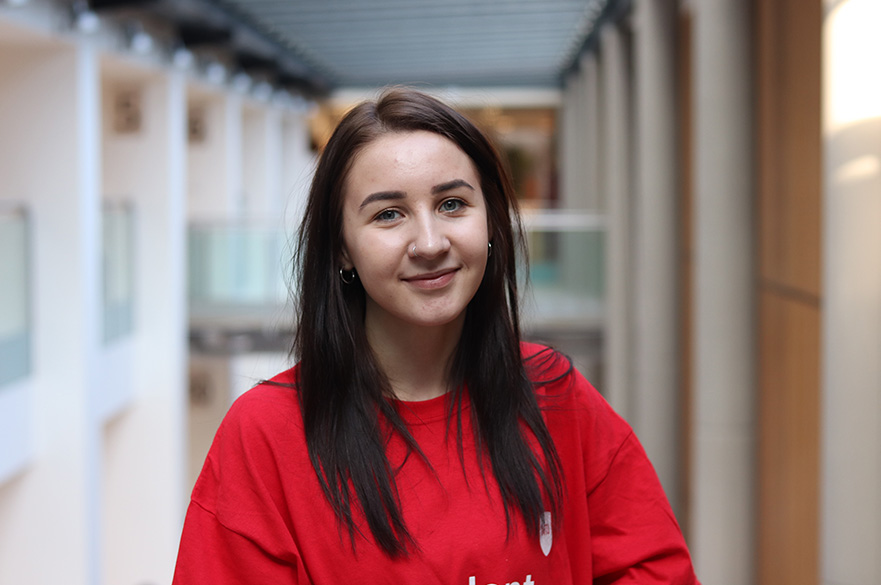 I chose NTU for its emphasis on student’s interests evident from the developments in its great facilities. It is also quite close to home so I knew that would allow me to have a sound balance of maintaining a social life with family and friends back at home whilst having my own freedom and workspace to study back in Nottingham.

I came to three open days because I was so enthusiastic to see how I am going to live for the next three years after attending the first one. It definitely helped me to envision myself studying here, which led me to believe this was the right University for me.

I was very impressed to learn that 97% of Law students are employed/engaged in further study after six months after graduating and to me, this meant a great deal of attention is placed on the interest of student’s futures and making sure they really benefit from the course down the line.

My favourite topic of my course so far has been Legal and Professional Environment where for seminars we had to prepare an answer to a problem question that was a real-life case which was closely linked to what I did in college, however this being more realistic, it illustrated to me how law is applied in an actual setting.

At an open day, we got a tour around the city campus that led us around NTU’s contemporary buildings and classrooms. The modern 24-hour Boots library is unquestionably one of the best highlights of the University, since it is equipped with so many workspaces, some with laptops and computers which really allows you to study in the way which is best suited for you.

During summer I had attended a work experience opportunity at Irwin Mitchell where my role was to work shadowing professionals in various departments including serious injury which I found very fascinating and I also carried out analysis and reported on medical law cases.

I feel like I have been very lucky to have experienced living in Nottingham as a student, I have a lot of freedom here and independence, which does come with flaws like having to do your own shopping and not having the comfort of doing your washing at your parents house!

I would like to become a criminal law solicitor since criminology has been a long interest of mine but I also would like to explore policing because it would give me more of a hands-on approach to law and justice.

My advice for choosing a University would be to visit as many open days as you can to Universities you are interested in going to to get a vibe of what they are like and be more informed about them, because initially I considered other places but my mind was changed massively about them after going to open days.

I studied law in college and already half way through my first year I was set to want to carry this on in University because I was so hooked on it and thoroughly enjoyed learning new aspects to it. There is a broad list of opportunities that a law degree can enable you to do so I wanted to give myself that option of choice.

The best thing about my course I would say is the balance of independence, having to do own notes after lectures, with the guidance given in seminars on topics you might not have fully understood and exercises that help you develop your understanding.