Students and staff from Nottingham Law School were witness to a historic ceremony last week – one which hasn’t taken place in the UK since the 1700s. 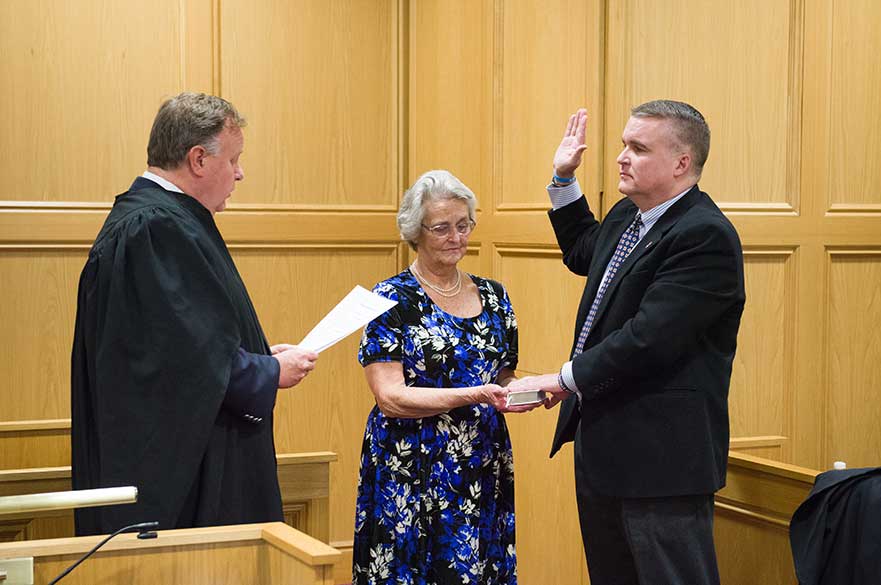 Students and staff from Nottingham Law School were witness to a historic ceremony last week – one which hasn’t taken place in the UK since the 1700s.

The Law School hosted a visit from Campbell Law School, North Carolina, to welcome the first US students onto its LLM Legal Practice by Distance Learning, and travelling with the group was faculty staff member Professor Peter Romary.

Professor Romary has been appointed to serve as a pro-tem Judge in North Carolina and is required to take an Oath of Office under the state constitution.  Peter received special permission to have the swearing in ceremony in Nottingham as part of the visit so his parents, who are based in the UK, could attend.

It is believed that this is the first time a US judge has been sworn into office in the UK since the 1700s. Judge Jeff Foster administered the oath and the Dean of Campbell Law School also spoke a few words about the US legal system and the role of judges.

Professor Janine Griffiths-Baker, Dean of Nottingham Law School, said: “This was a truly historic event and we are honoured to have been involved in such a momentous occasion.

“Our relationship with Law Schools around the world enables our students to learn and benefit from a wealth of experiences, and this is just one example of bringing the US legal system right to our door. Not only that, but we were also delighted to welcome the first US students onto our LLM distance learning course – four of whom are judges.”