The Hidden Dimensions of Inclusive Growth

An investigation by recent NTU graduates on Nottingham City and the Derby, Derbyshire, Nottingham and Nottinghamshire (D2N2) area

Economic insecurity and unequal growth have profound impacts on people and places across the UK. Our policy responses to these challenges too often fail.

Does it not worry you that we live in a country where more people have a smartphone than a job? The UK is one of the most developed economies in the world, yet compares poorly on measures of income, health and education inequality. There is increasing interest in the concept of ‘inclusive growth’ from major international as well as national bodies. This is evident from commissions released by the Royal Society for the Encouragement of Arts, Manufactures and Commerce (RSA), The World Economic Forum (WEF), OECD as well as many others.

The focus of this project is to explore the extent to which mainstream measures such as GDP and employment rates represent people's perceptions of economic performance and wellbeing. Currently, at a headline level the UK economy is performing relatively strongly: total employment is currently the highest on record alongside predictions that GDP growth for the second quarter of 2018 will be considerably higher than expected and above many international competitors. However, does this represent people’s experiences of growth and development? These measures fail to take into account a number of environmental and social factors such as sustainability, happiness, wellbeing, and the quality of employment. Robert Kennedy summed this issue up well by saying that GDP measures "everything except that which makes life worthwhile.” 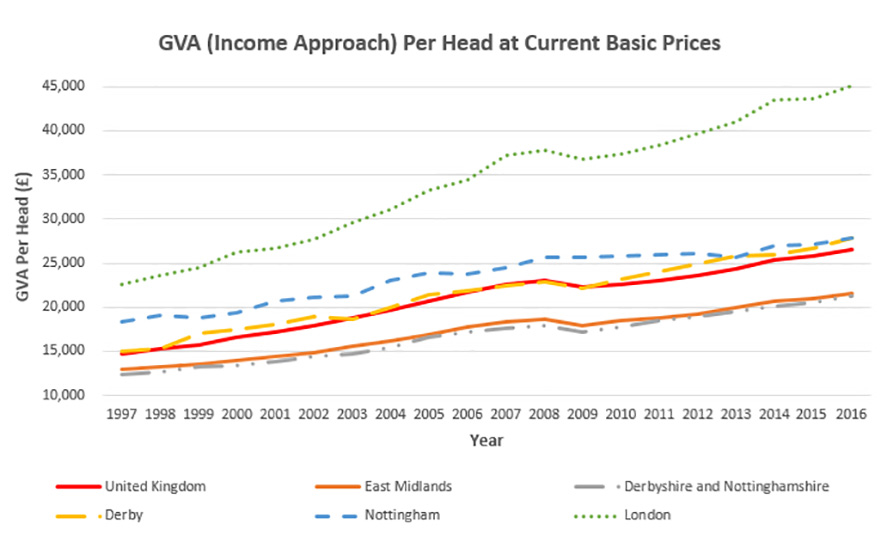 We plan to undertake a multidisciplinary investigation into growth as it is experienced by citizens of the D2N2 area (the Local Enterprise Partnership that covers Derby, Derbyshire, Nottingham and Nottinghamshire). We will begin data gathering at an upcoming event investigating individual experiences of inclusive growth by asking participants to tell us ‘How have things changed?’ in their work lives, their home lives, and in the built environment that they inhabit and interact with. We will ask participants to self-report their experiences of change. We will explore the lived experience of communities, service users and intermediaries which we believe will foster a more meaningful model of  Inclusive Growth, that includes factors such as ‘happiness’ and ‘wellbeing’. This will inform our understanding of inclusive growth, which we will present at the end of the project.

We will ask participants to report how things have changed in the area of ‘Jobs’, ‘Wellbeing’, ‘Environment’, ‘Fairness’, and ‘Health’. These measures were set out by The New Economics Foundation (2015) as five potentially better indicators of growth than traditional indicators such as GDP and GVA.  As graduates from three academic disciplines - economics, sociology and architecture - we will also conduct an observational investigation of the built environment, viewing the buildings and the extent of current construction activity across Nottingham in order to consider, from each of our distinctive perspective, where the physical evidence of growth is visible and where it is absent.

The local area of Nottingham has been highlighted specifically because of its low gross disposable household income (GDHI), which was 38% lower than the UK average in 2016 and the lowest out of all the local areas in the UK, this is exacerbated by the fact that this gap has increased from 34% 10 years ago. Despite this, Nottingham had the 6th highest employment growth of UK cities in 2017 and is forecast to be in the top 20 cities in terms of GVA growth in 2018. The City Council and the community charity Hope argue that these GDHI figures are skewed because the more affluent areas of Nottingham lie outside the city boundaries, but this still poses the issue of inequality within the city and wider area. Why is disposable household income so low when employment growth and GVA growth look prosperous for exactly the same boundary? Our task is to identify these trends and issues specifically in Nottingham and the wider D2N2 area and test them against people's perceptions of growth. 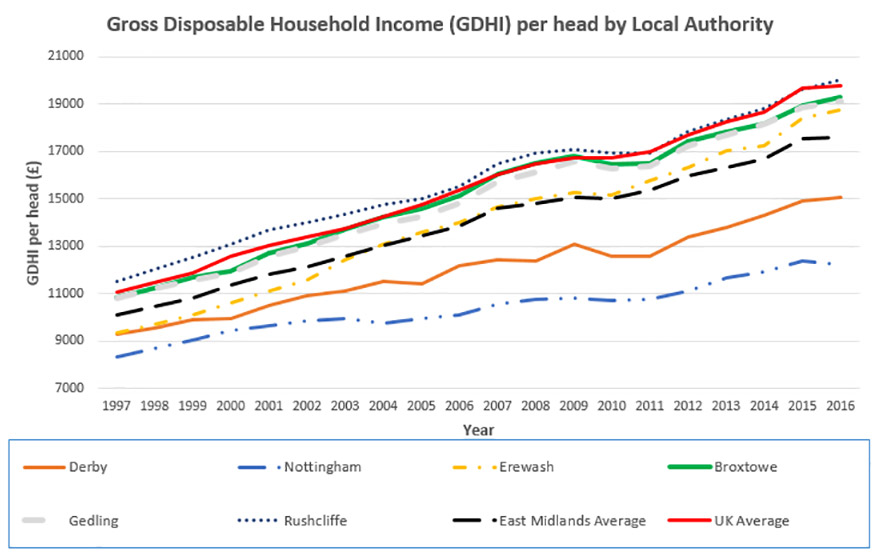 There are already a range of frameworks used to measure inclusive growth. However, many of these frameworks rely on the traditional economic headline indicators such as: GDP, GVA, Wages and Employment/Unemployment. Although these figures can provide a larger narrative around the context of inclusive growth, they do not fully represent specific groups within society and the full range of subjective experiences. Recent research by the New Economics Foundation suggests that the general public have become increasingly uncertain about both their understanding of economics and the extent to which economic ideas and measures apply to their lives.

More holistic, sociological concepts of growth and development include ideas such as wellbeing and happiness, a sense of community identity and support structures, perceptions of economic and income fairness, and trust in institutions and other people. Staff research specialisms within NTU enable a focus on the quality of work, also missing from many existing inclusive growth frameworks.  We are also interested in particular areas of Nottingham, including those that are considered ‘poorer’, such as St. Ann’s, which are also areas that may not be well captured by mainstream measures such as GVA and may also report lived experiences that diverge significantly from the quantitative measures of development or deprivation.

Indicators within the D2N2 area also contain geographical issues as, unlike areas such as London, the LEP area includes sparsely populated rural sub-areas, including Areas of Outstanding Natural Beauty, which illustrates how measures such as productivity fail to capture the value of the natural environment.

Design and the built environment has a role to play as it affects people and how they enjoy a space, how it makes them feel and the ease of mobility. A space can either create or destroy the sense of belonging felt by individuals and communities as buildings are built and demolished.

Therefore, it is important for this project to explore alternative measures.  Firstly, so that we can understand these issues in greater detail.  Secondly, so that we can use these measures to influence better policy and raise public confidence, so that policy is able to respond better to people’s lived experiences.

This project is in its early stages and as a team we believe that we are undertaking an important piece of work and encourage readers to share your thoughts with us. We will be following up through a number of additional blog posts as well as an event, info to which will be available on the Nottingham Civic Exchange website. To find out more about the project please contact Edward Green or follow us on Twitter.

Edward is a recent Business Management and Economics graduate that has a particular interest in UK regional inequality having conducted his final year research project on this topic. He is currently pursuing a career in market research having worked in this industry on his placement year.

Ashleigh is an Architecture graduate who is interested in how the built environment creates a sense of belonging to individuals and design that brings people together and also gives a sense of privacy. She has a care for the wellbeing and quality of life of individuals and communities.

Amanda-Rose is a recent Sociology graduate with a background in social care and individualised supports for Magdalene Laundry survivors. Her research areas of interest include the sociology of emotion with a focus on the impact of shame, which Thomas Scheff refers to as the 'premier social emotion', as well as issues of gender and reproductive justice and postcolonial studies. Next year she will undertake an MPhil at the University of Cambridge in the Sociology of Reproduction. 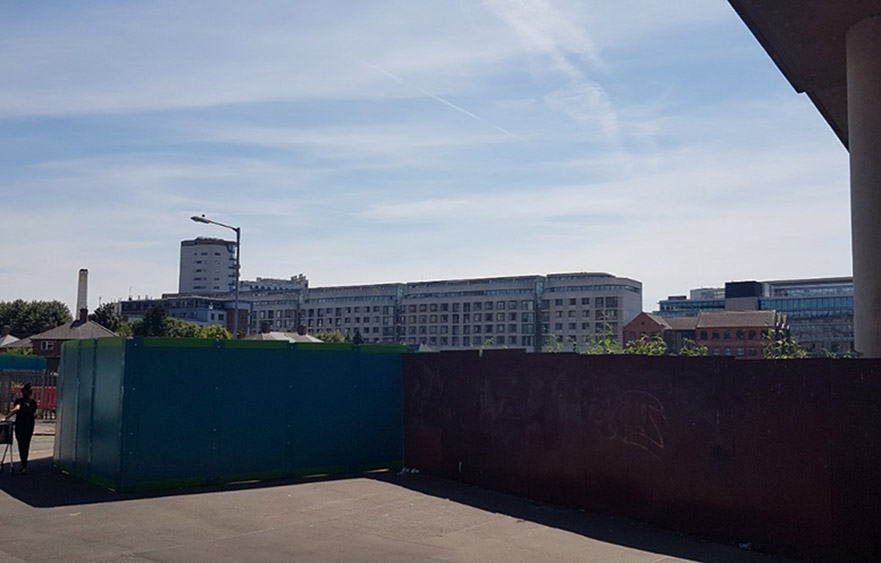 The Hidden Dimensions of Inclusive Growth