Scientists have recorded the honeycomb vibration of the honeybee ‘wake-up call’ for the first time – when the insects drum on the comb to prompt others bees in the hive to start getting busy. 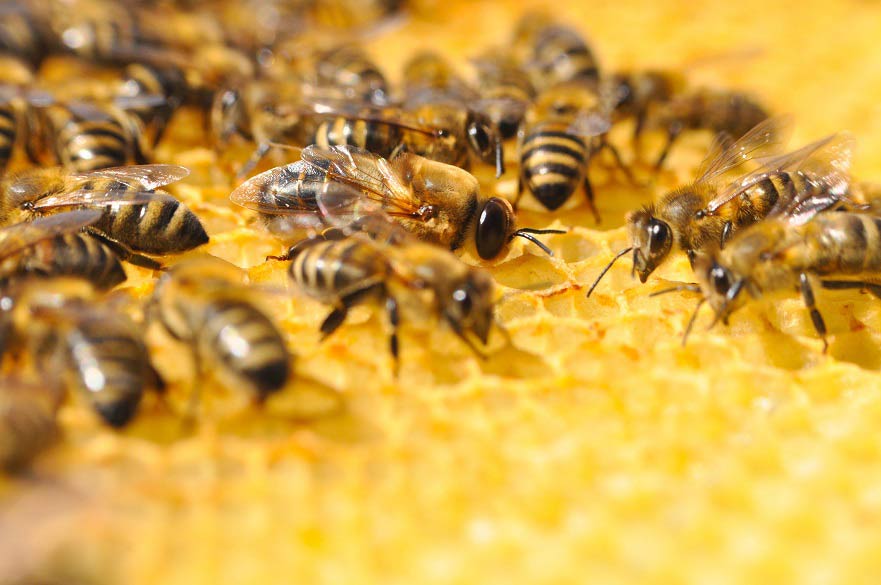 The Nottingham Trent University team used simultaneous video and accelerometers embedded into the honeycomb of hives to monitor a very specific vibrational signal generated by the honeybees.

The ‘Dorso-Ventral Abdominal Vibration’ involves individual bees shaking or jerking to drum a vibration onto the comb or another bee, which then signals to others to start foraging for food or become more active.

This signal was previously only visible to the naked eye by opening up the hive – which can disturb the bees – and had only ever been measured during the day and for very short periods.

Now for the first time the team has been able to monitor the signal for more than a year without disturbing the colony.

They have found that there may be more to it than acting purely as a foraging wake-up call, as the signal is most common at night, when no foraging for food takes place.

The researchers argue that this may be because the bees are returning from a day’s forage and issue the signal to prepare for a sudden influx of nectar and pollen. Or it could be the case that colony activation is crucial at night time for reasons unrelated to foraging, they say.

The signal reduces during the winter months when less foraging takes place, and increases significantly just before the bees swarm – when the majority of worker bees leave the hive with the queen to form a new colony.

The study – reported in the Nature Publishing Group journal Scientific Reports – involved continuously recording the vibrational amplitude and frequency in a number of hives over the course of a year, to investigate the long-term statistics of the signal.

This particular signal was recorded in the ‘infrasound’ range and was measured at 20Hz – an ultra-low wave frequency which is also used by elephants to communicate.

The faint drumming or purring the team recorded could be driven into speakers enabling the researchers to hear it for the first time.

Honeybees 'drum' on the comb in the hive

“Bees rest to conserve energy when they don’t need to be active, and some will wake the others up when it is time to start work,” said Dr Martin Bencsik, lead researcher and a scientist in Nottingham Trent University’s School of Science and Technology.

He said: “As often in research, many new questions arise as well as new answers. We are puzzled by the enhanced occurrences of this signal at night time; there is obviously more to its function than just a foraging activation signal. "

He said: "We now have proof that honeybees induce specific vibrational waveforms into the honeycomb. Now that we have thorough measurements of these, we could artificially drive them into the comb to further challenge our understanding of its functions. There are numerous exciting new pathways to explore, as a result of this work."

Co-ordination of honeybee tasks are achieved through many cues and signals produced by individuals in the colony, often in the form of chemical and vibrational signals. Although the former is well explored, the latter is fairly poorly understood and belongs to a field of science recently coined with the term 'biotremology'.

Last year the same team reported how honeybees give a ‘whooping signal’ in the hive – possibly as a response to being startled or surprised.

Michael Ramsey, a Nottingham Trent University scientist and the first author on the paper, said: “It is amazing how we can tap into the world of bees’ vibrations using this technology. It allows us to experience a honeybee hive as if we were a bee stood on the comb.

“The further application of novel methods such as this for studying animal behaviour will enable scientists to create a more comprehensive understanding of the natural world.”