How do young people visualise democracy?

Nottingham Trent University and Nottingham City residents explore young people's relationship to democracy and how to change it. #UKPW18

Young people from across Nottingham met with students from Nottingham Trent University (NTU) to participate in the first stage of a new project designed to consider how best to create opportunities for young people to get involved in - and influence - local democratic life after Brexit.

Teaming up with Nottingham City Council as well as Nottingham Civic Exchange, the event was part of the UK Parliament Week (#UKPW18), an annual festival that seeks to raise the public’s awareness and understanding of Parliament and democracy in general. Uniquely, the NTU “Life after Brexit” (#lifeafterbrexit) event provided a space to begin co-producing a plan to enhance young people’s engagement with local democracy and to ensure their voices are heard and acted upon.

Matt Henn (@MattHenn2011) opened the event by leading a discussion of why engaging young people with UK democracy is so important.

His own research, to be published in a new book “Youthquake 2017: The rise of young cosmopolitans in Britain” (with Dr James Sloam) later in November 2018, considers trends in youth political engagement and participation since 2001.  It reveals that young people are much less likely to vote than older people, which leaves them almost invisible to the political elite and easily ignored when it comes to policy priorities.

As a consequence, their voice is largely lost to politicians - and they are therefore often the age group that is most negatively affected by public policy.

The importance of Brexit was then outlined as offering potential threats and also opportunities to young people.  Threats, as a recent report forecast that Brexit may leave the current youth generation anywhere between £32k and £108k worse off by 2050.

Our event discussed the opportunity offered by Brexit to renew democracy, and potentially for young people to “take back control” and influence the future of UK democracy.

Department of Politics and International Relations 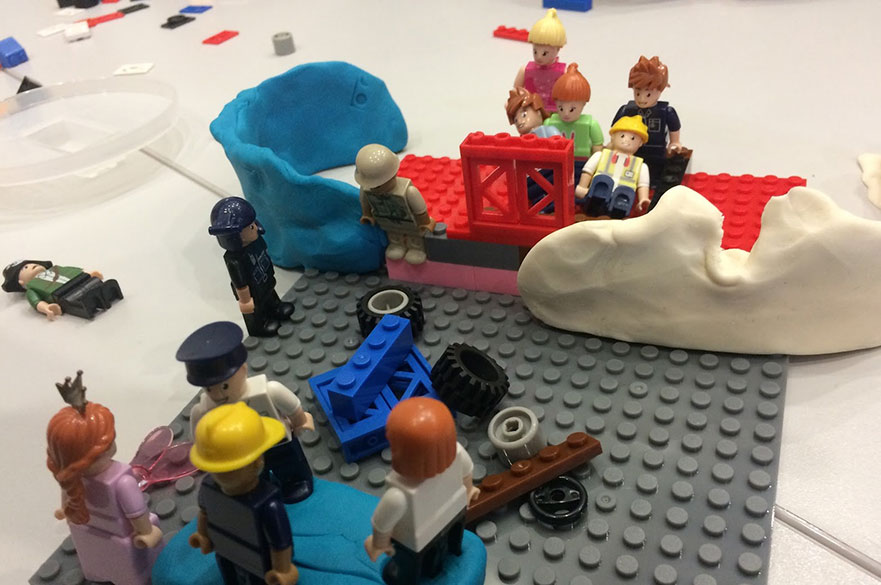 What does “democracy” mean to young people?

Young participants were then invited to model what they considered democracy to be and how they experienced it in practice.  It was clear that many considered it to be somewhat remote and inaccessible, as if there were a wall dividing young people from the world of politics and UK democracy in general, with professional politicians often steering the country in the wrong direction.

It was recognised that some individual politicians seek to connect with young people but by and large this was more the exception than the norm. Consequently, young people who felt under-served by the political class had little option but to get involved in non-voting activities such as protesting if they wanted to get their voices heard.

Furthermore, it was important to recognise that young people were made up of very diverse groups – school students, University students, young workers and professionals, the young unemployed as well as others.  Each had their own specific and important concerns and hopes, but all often left feeling failed by politicians.

Creating the foundations for a youth manifesto

The groups then considered the most important issues facing young people in their own community before–looking at how to bring these to the attention of the local council and others involved in local decision-making.

The emerging themes were local, national and global in nature, and participants at the event felt concerned that policy-makers were failing to consult with young people to provide tangible actions to address these matters.

Their concerns clustered around hate crimes issues and racism as well as violence and knife crimes.  They considered that educational policy - and the vision underpinning it - was somewhat misdirected.  Furthermore, it was felt that many schools were left under-funded, and that was exacerbated by what was perceived to be a worrying trend towards inequality in resourcing between schools.

In the final session, we worked together to create images that visualised the young participants’ preferences for how they might work with local councillors and other key local stakeholders to ensure their voices were heard – and how they might shape and influence the future of local democracy.

Young people felt they would like to take part in fora that mirrored our “Life after Brexit” event - that provided young people with the opportunity to network and to engage in deep deliberative discussions about how to address their concerns, needs, hopes and aspirations. Participants mentioned that there was a need to carefully reflect on how to maximise inclusivity and to ensure that these structures reached out to the diversity of youth groups within the city, to ensure that all views were reflected in discussions. It was recognised that social media may offer a useful tool to support this process.

Mandated youth delegates would then like to meet regularly with key decision makers to raise their voice and help shape the substance and direction of future policy-making.

The young participants at the “Life after Brexit” event agreed a general plan to meet at a later time in early 2019 to develop the ideas emerging from their discussions. In particular, it was agreed that the focus of any follow-on events should be to address two key issues:

Matt Henn and Jon Rea agreed to investigate the options for holding such an event and to circulate details to those present. If you’d like to take part in future events or find out more about this session please contact Professor Matt Henn.

How do young people visualise democracy?