Five things you need to know about employment in Nottingham

Today we publish Laying the Foundations of a Good Work City.

This report forms part of Nottingham Civic Exchange’s #GoodWorkNotts programme to understand employment in Nottingham. Good Work Nottingham is developing a conversation about how to make all work meaningful and fulfilling for our citizens and workers. We wanted to highlight five key facts about employment in Nottingham that everyone should know. We hope they will shine a light on the current situation, act as a catalyst for debate and help us push Nottingham to become a good work city. 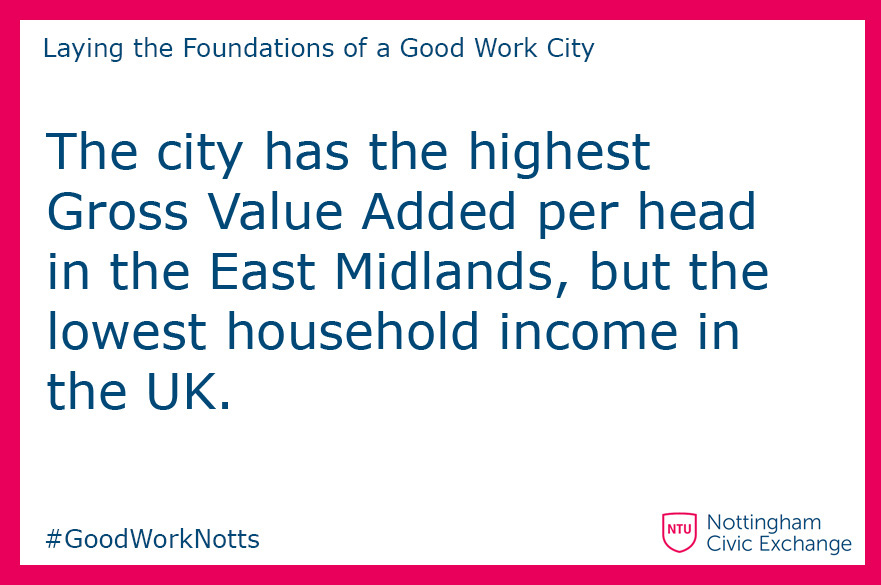 Nottingham’s overall economic story is a tale of two statistics. The value of goods and services produced in Nottingham estimated to be almost £28,000 per head of population, higher anywhere else in the East Midlands. However, Nottingham households have the least amount of income to spend after taxes and benefits out of all Local Authorities in the UK. This disconnect between locally generated wealth and household wealth is a symptom of structural issues. We have made a series of suggestions to the Local Enterprise Partnership D2N2 to help them develop an inclusive growth framework for their next five-year strategy. Tackling this problem is important because households with low disposable income can be more vulnerable to sudden financial changes such as paying for household repairs or buying new clothes for children. (What we describe as economic insecurity within our work)

The UK is basking in the highest employment rate since records began in 1971, with 32.5 million adults aged 16-64 in work as of the end of 2018. However, this progress has been anything but equal across the country. The employment rate in Nottingham in 2017 was only 2 percentage points higher than at the depth of the recession. The city currently has more people who are not seeking work and/or are unable to undertake work than at any point since 2007. Whilst the largest proportion of this group are students, we also see significant numbers who are not working because of long-term illness. The number of students who are not working has increased much faster than the total number of students enrolled at the two universities in Nottingham. 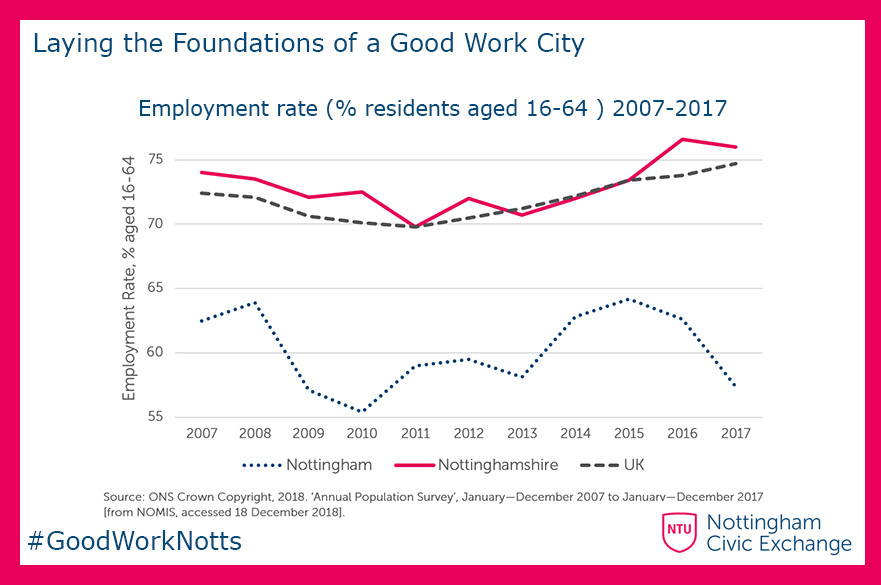 Full time employment has been falling

When we uncovered the decline in employment in Nottingham since 2015, we assumed this would be due to a fall in part-time and precarious roles; however, this is not the case. The group who have been most affected are those in full-time employment. There is little evidence to suggest that these individuals have shifted into either involuntary part-time work or self-employment. This further strengthens the view that Nottingham’s quality of work challenges can be understood by its occupational and sectoral structure.

Nottingham is dominated by one employment sector 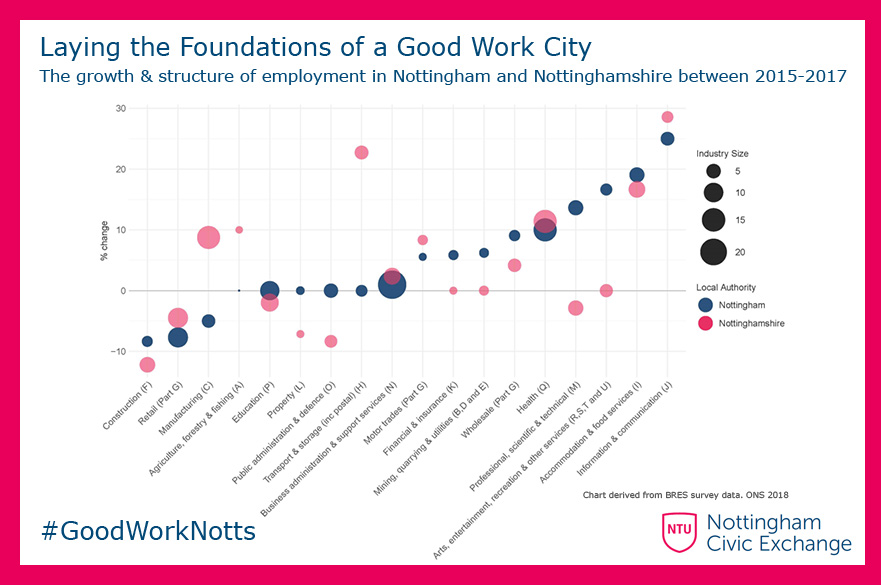 The city has one of the highest proportions of workplace-based employment in Business Administration and Support Services in the UK, which is largely comprised of back-office services and agency work.

Almost a quarter of Nottingham’s workforce are located in the Business Administration and Support Services industrial sector.  Whilst relying on one sector can be beneficial at times, economies based on one or two sectors are vulnerable to change. Although significant employment growth has occurred in knowledge intensive sectors, these still account for a small percentage of workers locally. Employment in service activities associated with low pay, low skill and often poor-quality work remains a key element of our economy despite the decline in the retail sector. Earnings in Nottingham are lower than in other major cities in the UK.  Whilst those living outside the City Council boundary commute in to perform many of the higher-paid roles in the city, even these workers will be paid less than their equivalents across the UK. Nottingham workers, both commuters and residents, produce less wealth on average for every hour they work than other UK cities.  This is not about people being lazy or unskilled: the average number of hours worked are no different in Nottingham than the UK average and we have seen some of the biggest improvements in workforce skills of any UK city.  The proportion of highly skilled people has increased significantly in Nottingham whilst the proportion of people lacking entry-level qualifications has also fallen dramatically.

It is more likely to be about the kind of tasks people are being given to do in the workplace and whether their jobs fully utilise their skills.  This seems to be having an impact on life satisfaction, feelings of happiness and anxiety levels. Despite a national reduction of people saying they were very anxious since 2012, we have seen rises in both the city and county, which follow trends in employment indicators.

Our report on employment in Nottingham highlights a number of important issues to consider. We hope you find the data useful in your work and gain a fresh perspective on working life in Nottingham. Nottingham Civic Exchange are working with colleagues and partners to help position Nottingham as a good work city. We hope you will join us on this journey. We will be hosting open sessions to discuss Good Work Nottingham alongside supporting Nottingham Citizens Work and Wages campaign. Please follow what we are doing using #GoodWorkNotts and visit our programme webpage for more details.