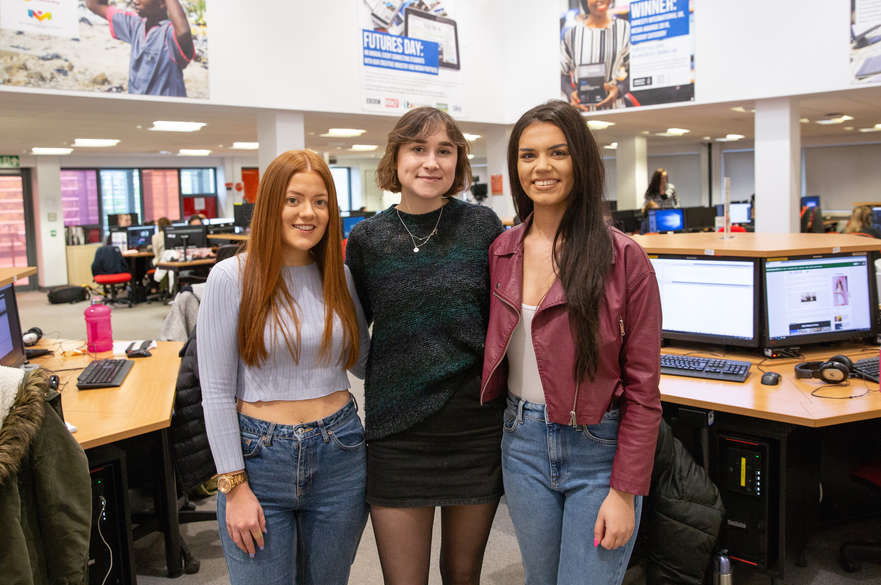 BA (Hons) Broadcast Journalism students have worked together on an important project as part of the module Data Journalism. The students chose to record incidents of catcalling and misogyny in Nottingham over a two-week period, as well as to investigate the number of reports and arrests that have been made to Nottinghamshire Police.

The group developed a survey and reached out for responses from the local population in Nottingham, asking them to recount what comments they received whilst out in public spaces. This allowed them to create a word cloud highlighting the most commonly heard phrases when being cat called. The investigation was also featured by Nottingham Post, who shared the survey with their online readers. The success of this project has attracted attention from Nottingham Women’s Centre who are interested in using the data the group collected to add to a submission they are making as part of the Law Commission’s review of hate crime legislation.

Nottinghamshire Police became the first force in the country to recognise misogyny as a hate-crime in 2016. Although single shouts are unlikely to be investigated, multiple occurrences or signs of a pattern may be. The students recorded how many reports had been made in comparison to how many arrests and charges had been made, as well as what areas received the most amount of reports.

We spoke to the students about their experience of the project. Hannah Norbury described why this project is so important: “For me personally cat calling and misogynistic hate crimes are something that happens often. This shouldn’t be so normalised, therefore we wanted to make the public more aware that it is actually a hate crime and you can report it to the police. We need to raise awareness and change people’s attitudes on cat calling to make women and men feel comfortable going about their day.”

Emily Mitton added: “I really enjoyed creating the word cloud filled with real remarks that have been said to the women of Nottingham. I found this aspect of our piece to be particularly important, as many women can feel alone after experiencing abuse on the street, so to have evidence that many others experience the same abusive remarks may help them to feel less isolated.”

“It also demonstrates the massive amount of cat-calling and misogyny that is going largely ignored by public and police alike. Women are told to 'just deal with it' when they complain about catcalling, but to have such a large amount of evidence that it's an ongoing problem could perhaps shock some people into thinking about the issue more.”

The group felt that this project and the Data Journalism module has enabled them to develop their workplace skills. Hannah commented: “I learnt a lot through this - at first I thought it was a module I would hate! But when we started the project I found that I loved data journalism. In fact, it’s probably been one of my favourite modules this year. I gained so many skills such as team work, which I can apply to my job after university.”

BA Broadcast Journalism student Samantha Lucas commented on the success of the project: “I enjoyed seeing our project develop and having our project featured in the Nottingham Post was a highlight for me. Now even the Nottingham Women’s Centre want to use our work, which is an honour and feels special to do this for women and misogyny. We hope the rest of the UK begins to take the same approach to catcalling that Nottinghamshire Police have.”