Research Blog: Another Election, Another Disappointment: Young people vote left and are left behind at the 2019 UK General Election 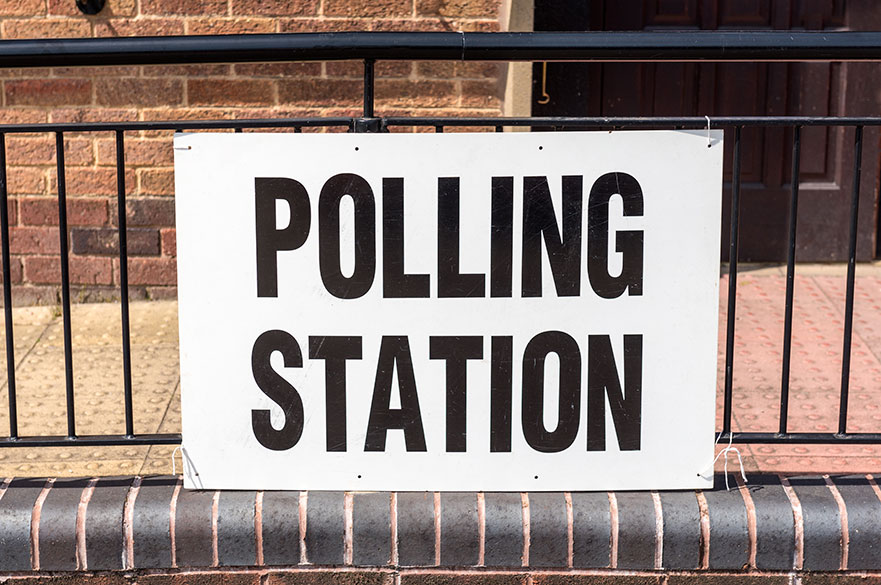 The 2019 General Election demonstrated once again that age rather than social class is the key cleavage dividing the electorate across contemporary Britain. The results also reaffirmed that the terms of this dominance of age over election outcomes are changing. For instance, election turnouts since 1997 have been very generational affairs, albeit demonstrating significant intragenerational differences. However, where previously these elections were characterised by the strong turnout of older citizens and a significant degree of abstention by the nation’s youth, more recent voting events suggest that youth could be attracted to the polls. In particular, 75 per cent of 16 and 17 year-olds voted at the Scottish 2014 Independence Referendum and 60 per cent of 18 to 24 year olds voted at the 2016 European Union Referendum.

In our 2019 Open Access book, “Youthquake 2017: The Rise of Young Cosmopolitans in Britain”, we highlighted a huge surge in youth political engagement. First of all, there was a spike in youth turnout (amongst 18 to 24 year-olds), rising to the highest level for a quarter of a century. Second, we identified a dramatic rise in support for Labour amongst young voters, founded on a growth in social liberal or ‘cosmopolitan’ values.

However, the 2019 outcome must have appeared as a groundhog event for the large majority of young voters.  As in 2017, many will have been left deeply disappointed that their votes, preferences and priorities will have counted for relatively little in shaping the future course of British politics as the Conservative party steam-rolled through traditional Labour-voting constituencies. 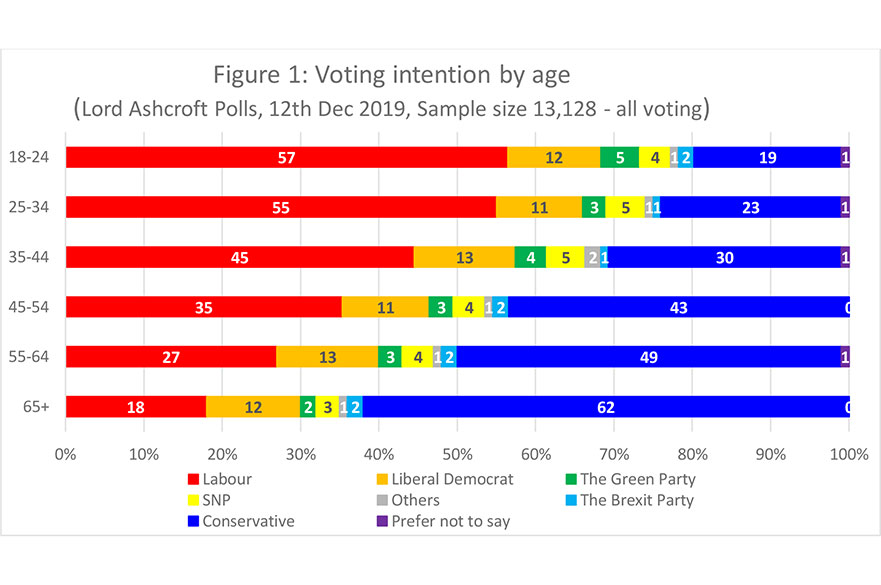 Against this trend, young people opted for Labour, increasingly so over the course of the campaign. At the outset, YouGov’s October poll indicated that Labour was dominating the youth vote; but with 38%, this was significantly down on their 2017 final-day vote (62%). However, this increased to 51% in their November 2019 poll and then to 55% in their December pre-election poll – a gap of 33% over the Conservatives. Elsewhere, Ipsos Mori’s final estimate indicated that Labour held a 26-point lead over the Conservatives among 18 to 34 year-olds.

Data from the Lord Ashcroft election day poll of those already voted offer a clear indication of this intergenerational divide with respect to party preferences. As Figure 1 indicates, the final youth vote was overwhelmingly cast in support for a progressive politics. Thus, two thirds of those aged 18 to 24 voted for broadly leftist, anti-austerity and cosmopolitan parties such as Labour (57%), Greens (5%) and the SNP (4%). In addition, a further 12% voted for the pro-Remain LibDems. This resulted in a Labour lead over the Conservatives of 38 points – larger than the historic 35-point gap recorded in 2017.

As we explained in our book, the period effect of the 2017 youthquake rippled up the generations. In part, we can see this occurring in 2019 when we compare the political allegiances of 18 to 24 year-olds with those aged 25 to 34 and 35 to 44. Each of these two older age groups indicated considerable majority support for Labour, Greens and SNP. By way of contrast, support amongst older voters for Labour reached an all-time low – falling to only 18% amongst those aged 65 and over. 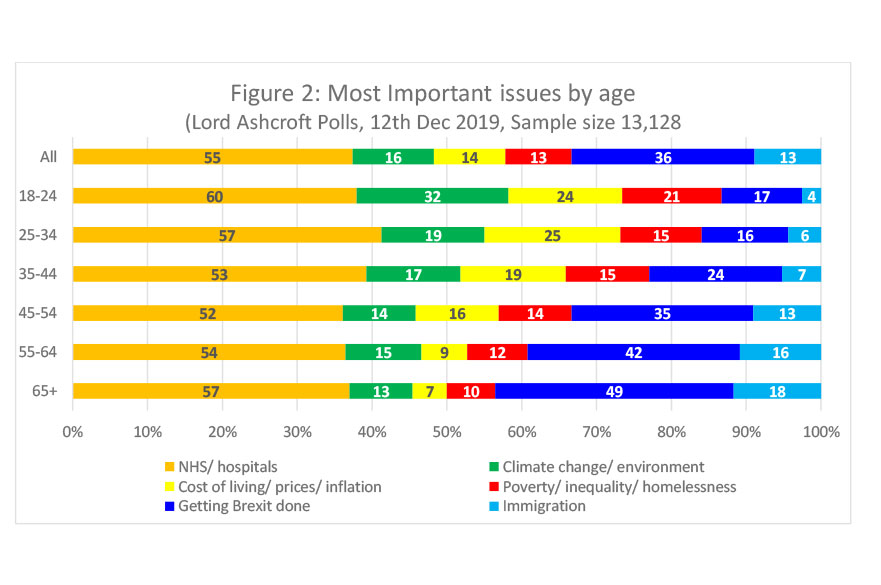 Figure 2: Most important issues by age

Finally, the party preferences of young people at  the 2019 UK General Election reflect their issue priorities – including, but not limited to, their profound concerns about the deepening climate crisis and social injustice. As Figure 2 reveals, there are intergenerational differences on several key issues – and some of these are considerable. For instance, after the NHS, the second most important issue identified by 18 to 24 year-olds was climate change/environment, with nearly three times as many young people prioritising this compared to the 65-plus group (ranked at 8th place). Social justice concerns including poverty, inequality and homelessness were twice as important to 18 to 24 year-olds as for those aged 55 or over, and the cost of living was three times as important.

Attitudes to Brexit and to immigration offered clear indicators of young peoples' cosmopolitan orientations. The 18 to 24 year-olds were significantly less concerned about the desire to “Get Brexit Done” (only 17%) than were those aged 65 and over, who prioritised it over all other issues (49%) except the NHS. Furthermore, young people were far more relaxed about immigration (4%) than were those over 65 (18%).

Early evidence from the 2019 UK General Election offers a picture of a continued deepening of the intergenerational divide underpinning British politics. In particular, while the nation lurched to the right, many young people continued to be attracted to parties offering anti-austerity, environmental and cosmopolitan programmes. While they may feel that by voting left they have effectively been left behind, their recent engagement in the global climate protests suggests that many young people have an outlet to actualise their political interests.

Research Blog: Another Election, Another Disappointment: Young people vote left and are left behind at the 2019 UK General Election