New hope for the preservation of red squirrels in Britain and Ireland is on the horizon, after the completion of the red and grey squirrel reference genomes by scientists at the Wellcome Sanger Institute and their collaborators. 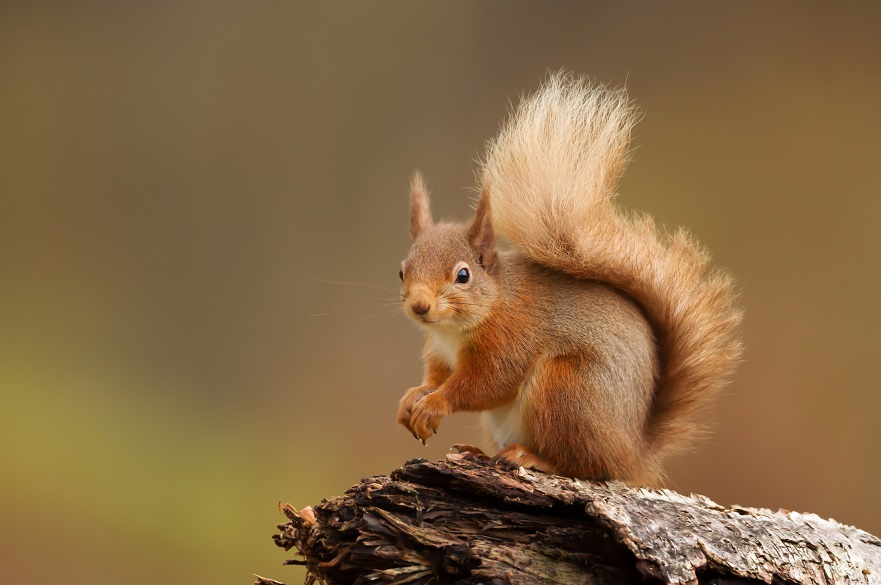 Red squirrels are native to Britain and Ireland, but they are under serious threat of extinction in these countries

The genomes may hold clues to why grey squirrels are immune to squirrel pox, a disease that is fatal to most red squirrels.

The study involved Nottingham Trent University PhD researcher Kat Fingland, who is based in the School of Animal, Rural and Environmental Sciences.

The newly sequenced genomes are a valuable resource that opens up numerous research pathways, including helping conservationists to monitor squirrel population diversity and investigate evolutionary traits. Genomics will help to create a clearer biological picture of red and grey squirrels, providing highly accurate data on which to base conservation strategies.

Red squirrels (Sciurus vulgaris) are native to Britain and Ireland, but they are under serious threat of extinction in these countries because of habitat loss, competition with grey squirrels (Sciurus carolinensis) and a fatal disease called squirrel pox. While the greys are immune to the disease, squirrel pox outbreaks can kill up to 80 per cent of a red squirrel population in an affected area*. Grey squirrels are native to North America and were first introduced to Britain by people in the late nineteenth century.

Pressure from grey squirrels and outbreaks of squirrel pox mean that red squirrels are now confined to isolated pockets in northern England and Wales, with a more connected population in Scotland and Ireland. Small, fragmented populations are at greater risk of declines and may suffer from genetic inbreeding.

It is hoped that the genomes will help understand the genetic basis of immunity to squirrel pox in grey squirrels, as well as in the small percentage of reds that survive outbreaks. The genome can also be used to help ensure that populations are genetically mixed, helping to select animals for reintroduction based on their genetic compatibility with existing populations to give them the best chance of survival through successful breeding.

Rachel Cripps, Red Squirrel Officer at Lancashire, Manchester and Merseyside Wildlife Trust, said: “Our red squirrels are in serious trouble and the red and grey squirrel genomes will be a valuable tool in our battle to save them. We need to find out whether isolated populations, such as the one in Formby, Lancashire, are at risk from inbreeding. We also need to find viable solutions to the threat of squirrel pox, and I hope the genome will allow researchers to do just that.”

Dr Rob Ogden, Head of Conservation Genetics at the University of Edinburgh, said: “Over the past two decades conservation genetic management of red squirrels has been based on using traditional DNA profiling techniques, which don’t allow us to understand much about the genetic variation we see between species or populations. The release of the red and grey squirrel genomes will allow us to base conservation strategies on much more data, and to answer questions about how populations differ and what implications this might have for their success.”

Kat Fingland said: “I hope that the genome will provide new tools and information, in order to help reverse the decline of the red squirrel and aid their long-term conservation in the UK. I’m particularly keen to see how this work will help to protect the red squirrel from the fatal squirrel pox virus.”

The red and grey squirrel are two of the genomes to be published as part of the Wellcome Sanger Institute’s 25 Genomes project**. They will also contribute to the ambitious Darwin Tree of Life Project***, which will see partner organisations sequence and assemble the genomes of all 60,000 animal, plant, fungal and protist species across Britain and Ireland.

The high-quality genomes will enable scientists to make new discoveries about how British and Irish species are responding to environmental pressures and what secrets they hold in their genetics that enables them to flourish, or flounder.

Professor Mark Blaxter, Programme Lead for the Tree of Life programme at the Wellcome Sanger Institute, said: “It’s fantastic that the red and grey squirrel genomes could very quickly contribute to important conservation work. I can think of no more crucial intervention the Darwin Tree of Life project could make than helping to bring a species back from the brink of local extinction.”